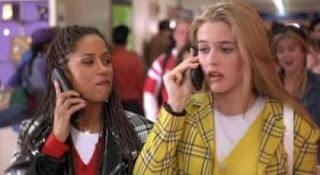 I’m just going to come right out and say it: I adore this movie. Not only is it my favourite “teen movie,” but if push came to shove, I’d probably qualify it as my favourite Jane Austen adaptation as well. So definitive was this movie to me and some of my friends when we were teenagers that well near a decade later whenever my old roommate and I would watch Six Feet Under and Jeremy Sisto would come onscreen, one would turn to the other and sing “Rollin’ with my hommies…”

Cher (Alicia Silverstone) is a wealthy Beverly Hills teenager with a penchant for matchmaking. She orchestrates a romance between two teachers, believing that if they’re happily in love, they’ll go easier when it comes to grading; and she makes a project of new student Tai (Brittany Murphy), guiding her away from Travis (Breckin Myer), whom she believes to be a bad match, and towards Elton (Jeremy Sisto), who turns out to be an even worse match. So busy is Cher meddling in the love lives of others that she almost fails to realize the romantic attachment that she has developed for Josh (Paul Rudd).

Not content to simply be about romantic entanglements, the film also a few subplots which flesh out Cher’s character, including her taking Tai under her wing and making her over, and her arranging a charity drive at the school to aid victims of disaster. Both of these plot elements serve to stress Cher’s good nature while also underscoring the fact that she is, essentially, clueless. After all, in making Tai over, Cher turns her into something of a monster (at least for a little while), and when putting together items for the charity drive she thinks it's appropriate to include her skis. Cher may always mean well, but it doesn't always come out well.

For me it’s impossible not to like Cher, which is kind of funny because she’s based on a character that I’ve never particularly liked. As played by Silverstone, there’s an underlying sweetness to her that makes it possible for her to say things like “Dionne and I are friends because we both know what it’s like to have other people be jealous of us,” without it sounding bitchy. The film is very smart in the way that it stresses that Cher isn’t dumb, but just sheltered by her insulated little world where shallowness is considered a virtue and issues like immigration can be solved by simply adopting a “the more the merrier” attitude (as a slight aside: if I didn’t already love the great Wallace Shawn, I would after just watching his facial expressions when Cher makes these kinds of declarations during his debate class). The film also, importantly, gives Cher room to grow as a character, learn from her mistakes and gain perspective on herself and those around her – something which isn’t always afforded to characters in teen comedies (or comedies in general, for that matter).

Clueless differs from the teen movie formula in a few significant ways, beginning with the fact that the “popular girl” isn’t also “ the bitch.” It also, refreshingly, does not, at any point, feature the prom and ends instead in typical Austen fashion with marriage and all the players paired off, and it features parental characters who aren’t completely out of touch. My favourite moments involve Dan Hedaya as Cher’s father, who gets some of the film’s best lines, including “If anything happens to my daughter, I’ve got a .45 and a shovel. I doubt you’ll be missed.”

I'm right there with you. I watched this movie about once a week with my roommate freshman year of college and never got tired of it. I can still virtually quote it word for word. It is the ultimate feel good movie for me.

What I especially love about it is that even though parts of it seem dated, overall it still seems fresh and relevant.

Interesting twofer with this and Heathers, to be sure...

I'm with the two of you, in spite of my maleness (though I don't think Clueless is all that "girlie"). The cast is deep and talented, from the aforementioned Hedaya (priceless) to Donald Faison to Sisto to Shawn to Rudd. And there's even a Mighty Mighty Bosstones appearance!

Dare I say...I like this better than Fast Times.