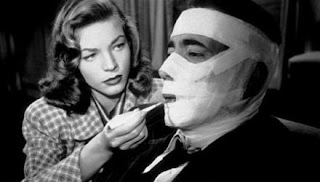 Dark Passage is a strange film when compared with the other Bogart and Bacall films or, indeed, any other Bogart film. This is a film where Bogart plays a protagonist who is heard but not seen for the first half and seen but covered in bandages for much of the second. This is a gimmicky film and one which, to me, didn’t really transcend the gimmick to make the story worth telling all on its own. If I were to rank the four Bogart-Bacall films in order of preference, this one would come in at a distant fourth (though, to be fair, I like the other three so much that this one could have been great and still come in fourth).

The central character is Vincent Parry, who is basically played by the camera with voice-work by Bogart for the first hour or so. We meet him as he’s escaping from prison where he’d been serving time after being convicted for killing his wife. On the road, he meets two motorists: the first is Baker (Clifton Young), who wants to turn him in for the reward and is quickly disposed of with a punch to the face; the second is Irene (Lauren Bacall), who wants to help him. He recognizes her as having attended every day of his trial, even though they don’t know each other, and she explains that she believes in his innocence, having seen her own father railroaded for a similar crime in a similar way.

With his face all over the news, Vincent decides to take the advice of a helpful cabbie, who knows a doctor who would be willing to perform plastic surgery in secret for the right price. The original plan was that Vincent would recover at the home of a friend of his but while he’s going under the knife, his friend is murdered and now he’s the prime suspect in that crime as well. Luckily Irene is still around to lend a helping hand and allows him to convalesce in her apartment, which naturally leads to the two falling in love. As the bodies continue to pile up and the police continue to close in, Vincent’s only hope is to get out of town and make it to Peru where, if all goes according to plan, he and Irene will one day be reunited.

While I appreciate the filmmakers’ attempt to do something different, I found that the lengths to which it goes to not show Vincent fairly distracting and too drawn out. The focus of the film is so completely on the idea of hearing but not seeing Bogart that the story itself is given short shrift. As for the story, it relies perhaps a little too heavily on coincidence, from the fact that Irene just happened to be out near the prison painting when Vincent made his escape, to the fact that Irene just happens be an acquaintance of Madge (Agnes Moorhead), the woman whose testimony played a pivotal role in putting Vincent in prison.

All that aside, it is, as always, a joy to watch Bogart and Bacall play off each other on-screen. They had the kind of crackling, easy, playful chemistry that few other on-screen couples then or now could duplicate. In terms of individual performance, Bacall is luminous and engaging, which might be a result of her directly addressing the camera in many of her initial scenes. As for Bogart, it’s sort of difficult to really gage his performance because he’s at a something of a disadvantage for so long, being just a voice. However, once he actually shows up in the flesh he really owns the character and makes it work.