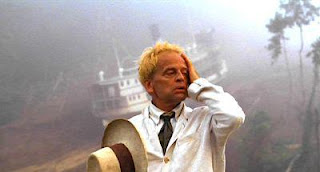 Fitzcarraldo is the perfect companion to Aguire, The Wrath of God, as both involve long journeys down the Amazon in the pursuit of an insane and impossible dream. Fitzcarraldo is a bit of a let-down if viewed right after Aguire, but it isn’t a film without its unique charms. If nothing else, it certainly makes you grateful that there are people out there like Werner Herzog, people who dance on that fine line between genius and madness.

Brian Sweeney Fitzgerald (Klaus Kinski), known to all as Fitzcarraldo, is a dreamer with a long line of failed projects behind him. His great desire is to open an opera house in the small Peruvian outpost that he calls home and he’ll stop at nothing to achieve it. To finance the project, he borrows money from the local madam (Claudia Cardinale) and buys the right to develop a plot of land which is said to be rich in rubber trees - he’ll sell the rubber and use the profits to finance his dream. There’s just one catch: the plot he’s bought is on the bank of a river that’s impossible to navigate at a certain point. There’s another river, on the other side, that would be smooth sailing were it not for the fact that cannibals are known to frequent it. Looking at a map, Fitzcarraldo sees that there’s a point at which the two rivers almost touch and he comes up with a plan to take a steamship down one river then drag the ship over land to the other river to aid in the development of his land.

Everything about his plan is insane, it’s only saving grace the fact that he believes in it so fervently. The making of the film has a similar quality, as Herzog, in his demand for realism, insisted on actually dragging a steamship over land for the sake of the film. The effort of this undertaking is obvious, but the film itself doesn’t entirely live up to everything that went into making it. There are some wonderful and memorable moments captured here – the scenes of the ship being dragged over land, the ominous appearance of an umbrella floating down the cannibal’s river, the sudden appearance of the cannibals themselves – but overall the film seems a little bit bloated and over-long.

As Fitzcarraldo, Kinski is something of a revelation to me, primarily because my only familiarity with him as an actor prior to seeing this film was in two other Herzog films: Aguire and Nosferatu: A Symphony of Horror. In those films he plays decidedly nasty characters, but here he plays a man who is quite gentle, aggressive only in his determination to achieve his goal. He has more range than I would previously have given him credit for, due largely to the fact that those nasty characters he played onscreen seemed to be extensions of his, let’s say, eccentric off-screen persona. So, I must admit to having been wrong because he was quite a skilled actor and carries this film firmly on his shoulders.

Although Fitzcarraldo isn’t an entirely successful film, it is one that is entirely worth seeing at least once.

You're right about Kinski's gentleness here, but I think that underlying it you can very easily see the mania ... part of his genius, really ...

And Herzog and he are so good together because Herzog -- as you nicely put it -- dances on that fine line, the one that Kinski had stepped over long before.