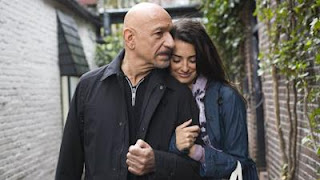 Elegy is a meditative and thoroughly adult movie from director Isabel Coixet. Though the subject matter doesn’t necessarily break new ground – older man involved with younger woman or, to be more specific, professor involved with student – the film does give it some interesting twists. Mostly, though, this is an actors’ movie and the performances on display here make it worth a look.

The story is related to us by David (Ben Kingsley), a professor and minor literary celebrity who fears commitment and has spent his adult life jumping from fling to fling, save for a long-term (albeit sporadic) relationship with Carolyn (Patricia Clarkson), a former student. When Consuela (Penelope Cruz) enters his class, it seems to be a matter of course that they will end up in bed together – he’s been here many times, although this particular time it will be different. For one thing, he realizes that Consuela won’t just jump into bed with him, he’ll have to work for it, something which he chalks up to old fashioned/old world mentality stemming from the fact that she’s a Cuban immigrant. This old fashioned quality of hers may be nothing more than a projection on his part given later revelations regarding her sexual history, but then he spends much of their relationship projecting his desires and anxieties onto her to his own detriment.

In the battle between desire and anxiety, anxiety wins with ease. David is aware of himself as an older man, spends much of his time imagining Consuela leaving him for another and younger man and the rest of his time keeping her firmly at arm’s length. His friend, George (Dennis Hopper), himself familiar with liaisons with younger women, encourages him to simply call an end to it since it’s bound to end anyway, but David can’t bring himself to let go. Eventually, though, Consuela decides that she must and her departure marks a turning point in David’s life.

Elegy is a good movie that somehow never propels itself into greatness. The story is, for the most part, solid but there are problems. The first, say, twenty minutes are frontloaded with the kind of explanatory conversations which should be unnecessary between people who have known each other for decades. The thing I’ve always liked about movies by Robert Altman is that he never subjects his characters to the kind of conversations which exist only for the convenience of the audience. David and Carolyn have been involved for decades, she’s aware of the issues which exist between him and his son (Peter Saarsgaard), so why should he feel the need to spell things out to her? This is a minor problem; the big problem is with pacing. The film unfolds at a thoughtful pace which occasionally slows to a drag, especially towards the end which dampens the emotional impact of the film’s conclusion.

Despite these issues, Elegy is overall quite engaging, due primarily to its wealth of great performances. Clarkson, Saarsgaard and Hopper all shine in supporting roles (especially Hopper), and Kingsley is flawless as David, delivering one of his finest performances. It’s Cruz, however, who really owns the movie. At first I had some doubts about her in the role, but she brings a grace and self-confidence to Consuela which is absolutely necessary and which a younger actress might not have been able to supply. Between this film and Vicky Cristina Barcelona, Cruz is having a banner year and hopefully she will continue to make interesting choices which allow her to show off different facets of her abilities.

Nice piece. I especially like the acknowledgment that there is more to films than originality, that taking a well-used formula and sprucing it up with fine acting can do the trick.

Well, there is that old adage that every story has already been told. With that in mind the thing that matters isn't what you're telling, but how you're telling it.