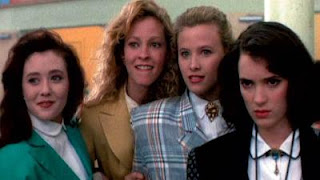 With its many moments of demented brilliance, I can completely understand how Heathers has become a cult classic, though I don’t think it’s nearly as good as its reputation. I’m absolutely willing to acknowledge that my opinion in this regard might be coloured by having heard about this movie for so long before actually seeing it, and thus I went into it with expectations that were too high. I can’t pretend that I wasn’t disappointed, though on the bright side this does mark one of the few occasions where I’ve actually enjoyed Winona Ryder in a film.

The Heathers in question are the three most popular girls at school, all actually named Heather. There’s a fourth member of their clique, Veronica (Winona Ryder), who both is and isn’t one of them. At her core, Veronica hates the Heathers, especially Heather Chandler (Kim Walker), but she also enjoys the popularity that being one of them brings her. She’s aware enough to see through Heather’s bullshit, but can’t seem to keep herself from giving in to her demands no matter how much she hates jumping through the hoops.

One day she meets J.D. (Christian Slater), whose name and demeanour evoke James Dean and every rebel without a cause since. With J.D.’s help and encouragement, Veronica begins acting out her secret desires – namely by murdering Heather Chandler and a few of the other popular kids. The murders are successfully made to look like suicides, which has the effect of making suicide the new cool thing to do amongst the student body. For a while, Veronica is able to feign innocence by telling herself that she thought J.D. was only playing pranks that went too far, but she’s eventually forced to come to terms with her complicity and her attempts to put a stop to the murders turn J.D. against her.

As satire, the movie doesn’t quite work for me for a couple of reasons. First, it isn’t firmly grounded enough in any authentic sense of reality for the satirical elements to stand out against it – the world depicted here isn’t recognizable enough as our own world for the commentary contained in the film to apply to our culture. Second, the film itself isn’t particularly clear about what, exactly, it wants to satirize. Is it the desensitized nature of teenagers and the ways that they can so casually do damage to each other? Is it the generation gap? The idea of the school system itself and the enforced socialization which guarantees that some people will be tormentors and others tormented? When the movie was over, I wasn’t exactly sure what message I was meant to get from it.

Despite the problems that I have with the film, there are a lot of things about it that I enjoyed. Dark as the subject matter is, it allows for some especially sharp dialogue (Kurt: “Hey Ram, doesn't this cafeteria have a no fags allowed rule?" J.D.: “Well, they seem to have an open door policy for assholes, though, don't they?”), and as the protagonist Ryder is effective, alternating between being ahead of the curve in one sense (with the Heathers) and behind it in another (with J.D.), and she manages to remain relatively likeable even when she's facilitating murder.