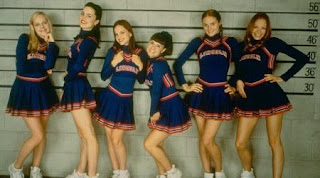 Sugar and Spice is an atrociously bad movie… that I just so happen to love. I can’t really explain it; even as I watch it I find myself thinking, “I shouldn’t be enjoying this,” but inevitably I do. I suppose that even the most discerning viewer has his or her weak spot, but it never would have occurred to me that mine would be a cheerleader heist movie.

The story is related to us by Lisa (Marla Sokoloff), perennial wannabe and leader of the B-squad cheerleaders. The A-squad cheerleaders, of whom she is so jealous, consists of Diane (Marley Shelton), Kansas (Mena Suvari), Cleo (Melissa George), Hannah (Rachel Blanschard) and Lucy (Sara Marsh). The A-squaders are tight – so in sync with each other that they all get their periods at the same time – so it only makes sense that when Diane finds herself pregnant by Jack (James Marsden) and short on money after her parents kick her out, the others help come up with a plan to help out.

Since Diane works in a bank, they decide that the most sensible thing to do is rob it. In preparation for the job, all the girls watch heist movies and take notes. While most choose movies like Dog Day Afternoon and Reservoir Dogs (neither of which, it seems to me, would help you plan a successful heist), Hannah, who comes from a deeply religious family and is only allowed to watch G-rated movies, chooses The Apple Dumpling Gang - a fact which does not go over particularly well with her cohorts. Eventually an addition is made to the group in the form of Fern (Alexandra Holden), whose father agrees to give the girls guns at a discount if they agree to put Fern on the A-squad. With Fern’s help, the robbery goes as planned except for one minor detail: Lisa has figured out who was behind it.

There are so many things wrong with the way that this movie is put together, starting with how it is related to us. Lisa is laying the whole thing out to the police – that much makes sense: she hates the A-squad, she wants to see them punished and she wants attention. However, the ending completely negates everything – there’s no reason why she should be telling this to the police of all people, which makes the fact that she’s telling the story at all utterly pointless. There’s also the fact that the characters never become more than two-dimensional. Lisa introduces them to us by giving each a nickname and none of them ever goes beyond the confines of what those names imply.

However… I still love it. I love that Cleo is obsessed with Conan O’Brien and dreams of living with him in an apartment filled with leather. I love Lisa, one of the most enjoyably unpleasant characters I’ve ever encountered in a film, and I love James Marsden, who plays his role with such goofy sincerity that it’s hard not to love him. Granted, none of these things is enough to make the film good, but thinking of them makes me feel a little less guilty about liking it so much.