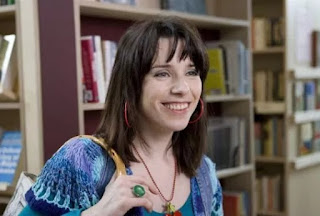 #20: Happy-Go-Lucky (2008)
This is a movie that should be hard to like because by all rights its protagonist should come across as annoying as hell. Instead this woman, a relentless force of positivity played marvelously by Sally Hawkins, is enormously endearing and the film itself rises to match her very high spirits. Written and directed by Mike Leigh, who excels in the kind of "slice of life" storytelling that drives this film, Happy-Go-Lucky pits this joyful, optimistic woman against a horribly miserable man (played by Eddie Marsan as someone whose desperation for some kind of affection and frustration that he can't seem to attain it turns him into a ticking time bomb of rage), testing the extent of her empathy and allowing Hawkins to explore the deeper, trickier depths of her character's personality. Happy-Go-Lucky is an extraordinary movie that flows from Leigh's greatest strengths as a filmmaker and showcases the incredible talent of Hawkins. 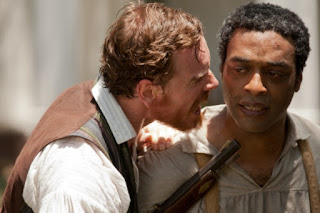 #19: 12 Years a Slave (2013)
Based on the memoir of the same name which charts Solomon Northrup's experience being kidnapped, sold into slavery, and finally rescued after 12 years, 12 Years a Slave is a violent and harrowing movie. It does not sugarcoat anything, or engage in any Antebellum mythologizing, or allow for any apologist leaning distinction between types of slave owners. Some might be more cruel and sadistic than others, but even a "good master" is only good in ways that don't affect his economic interests. It does not shy away from the evil of slavery, from the physical violence or the psychological scars of degradation, approaching these facts in a direct and unblinking way and one which challenges Hollywood convention. It's an important film, one whose significance is going to be felt for a long time for a lot of reasons, but it's also a great film in and of itself, one built on a compelling narrative and brought to life through a visual style that enriches its themes and brings them into sharper relief. 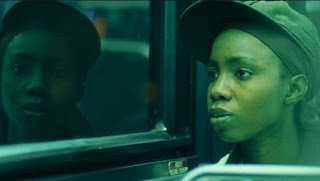 #18: Pariah (2011)
On the surface, Dee Rees' film is a story about sexual identity. It follows a 17 year old girl as she struggles to bring her identity into focus, closeted at home, tentatively stepping out into the gay community when she leaves the house, she's trying to figure at how to go forth in the world. However, while the character's sexuality is definitely a key part of the narrative, Pariah is ultimately about identity in general and the sometimes painful process that all adolescents go through as they try to form a unique sense of self, trying out different styles as they attempt to outwardly express the identity that's forming inside. The protagonist will try out many different guises, each informed by one of the important relationships in her life, and her character arc is not about finding someone to love but about finding her own voice and her own sense of self. Pariah is a wonderful, woefully underseen movie that contains the kind of thematic universality that is rare and precious and such deep emotional truth that it transcends any attempt to pigeonhole it as a "special interest" movie. 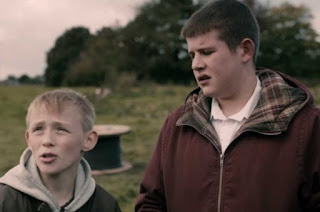 #17: The Selfish Giant (2013)
Clio Barnard's stark and gritty film about two boys caught in a cycle of poverty and violence is bleak and emotionally raw, but it's so expertly rendered and brims with so much life and vitality that it hooks you and leaves you unable to look away. It centers on two 13 year old boys, one of whom has behavioral problems, the other of whom is basically well-behaved but is a follower who goes along with whatever his friend says, and who both live in homes characterized by a lack of money and a sense that every day might be the day when the unsteady structure of the family finally topples over. Barnard tells their story in a very matter of fact way, neither sensationalizing it nor sermonizing about it, as it explores the ways that the system is stacked against these kids, whose families have neither the tools nor the support they need to lift themselves or their kids out of poverty. The Selfish Giant is a film as rich and rewarding as it is unflinching and grim. 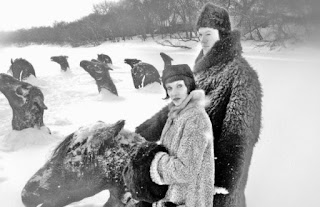 #16: My Winnipeg (2008)
Guy Maddin's fever dream of Winnipeg is about anyone's experience of returning to their hometown after a time away. It's about the sense of loss that comes from growing up and seeing the things that were so familiar to you during childhood change and modernize during your adulthood. It's about the restless desire to leave your place of origin and the affection and nostalgia that will always bring you back. It's an evocation of time and place where fantasy and personal mythology are just as real and true as facts themselves and in which the more absurd its anecdotes seem, the closer they feel to emotional legitimacy. It's funny and sad, ridiculous and profound, intimate and universal. It's not quite a documentary, but it's not entirely fiction either, playing out more like a magic realist memoir in which anything goes (A city full of sleepwalkers? Sure. Horses frozen in a lake and becoming a picnic attraction? Why not) because what matters is how it feels. My Winnipeg is a beautiful and bewitching film from one of the true contemporary geniuses of cinema. 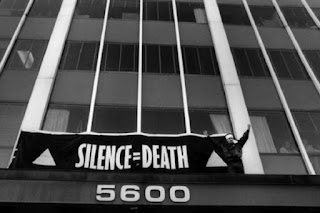 #15: How to Survive a Plague (2012)
Constructed primarily with archival footage and interviews, How to Survive a Plague documents the HIV/AIDS epidemic and public response to same from the 1980s to the early 1990s, as a community found itself decimated while the government alternated between ignoring the public health crisis and blaming those afflicted for their fate. Unable to count on anyone else, the community organized itself to demand that steps be taken to research and treat AIDS, and the film follows this sometimes fractured grassroots movement over the course of several years, charting the rising death toll from one year to the next and the anguish of men who fear that each year will be the last in which they will be able to fight. Directed by David France, How to Survive a Plague is a straight forward, no frills film that lets its footage speak for itself. It is a powerful piece of filmmaking that acts as a monument to the courage and perseverance of people who refused to just lay down and die in the face of government indifference. 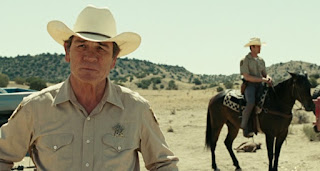 #14: No Country For Old Men (2007)
Put simply, No Country For Old Men is about a man who stumbles into something he has no business being involved in, finds a briefcase full of money in the process, and mistakes being in the wrong place at the wrong time for being in the right place at the right time. There's more to it than that - there's his flight as he attempts to stay one step ahead of the people who want the money back, there's the police investigation headed by a good cop who will come to discover that the time for men like him has passed, and there's an iconic villain who trails chaos after him wherever he goes - but that's the heart of the story. In this film the Coen brothers completely upend expectations - killing the character who appears to be the protagonist, denying the audience (and the characters) the satisfaction of a showdown between the good guy and the bad guy, ending on a note of absolute despair - and do a lot of deft genre work that makes the film somewhat difficult to classify. But as hard to define as it may be, and bleak as it is, No Country For Old Men is a mesmerizing film and an absolute masterpiece. 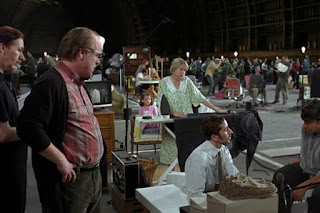 #13: Synecdoche, New York (2008)
Charlie Kaufman has always been an artist of great ambition and none of his films have been more ambitious than Synecdoche, New York, a densely layered work that seeks nothing less than to dissect life down to its defining principle. In it a theater director played by Philip Seymour Hoffman mounts an epic piece of work that he unfolds on such a grand scale that it takes decades to put together, requires a warehouse to be staged in, and eventually contains a recreation of the staging the play itself and a recreation of the recreation - it is about worlds within worlds within worlds. He wants to reveal the essence of life itself, but he's ultimately so consumed by himself that he can't get out of the way enough to accomplish it. Synecdoche, New York is an absorbing movie that demands (and earns) multiple viewings. It's a heady work of drama, comedy, and big ideas, played out by a cast of fantastic actors working at top form. 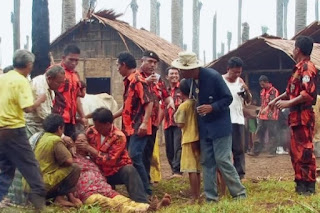 #12: The Act of Killing (2013)
Taking the 1965-66 Indonesian purges as its subject, The Act of Killing tells its story by approaching members of the death squads and asking them to recreate their heinous acts. It doesn't take much to get them to do this - these men aren't ashamed of what they've done; they are so completely secure in their belief that they won't be punished for any of it (because people who still hold political power were also part of it) that, with no small amount of pride, they describe the torture and murders they committed and provide tours of the locations where their atrocities were carried out. But, despite giving them a starring role, this film is ultimately not about giving these men a platform. Instead it is about confronting them with the horror of what they did by having them recreate their actions, sometimes playing the role of their victim, and making them understand that their victims were people. These men may be the subjects of the film, but the film is not about them, it's about what they did and how those actions shaped and continue to inform their country. It's a powerful film about the banality of evil and the psychology of fear. 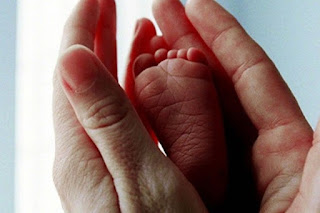 #11: The Tree of Life (2011)
Terrence Malick's grand opus is at once an epic work and a piercingly intimate one. It unfurls its narrative all the way back to the dawn of time and grapples with some of the great questions of the human experience - Why are we here? Why must we leave? What does it all mean? - but at its center is a specific, subjective experience about a boy growing up in 1950s Texas. He's conflicted in his relationships with his parents, drawn to the gentleness of his mother but ashamed of his inability to live up to her goodness, driven by a desire to assert himself against his father's dominance while also longing for the man's love and approval. The Tree of Life is a deeply personal work about grief that is sometimes breathtakingly beautiful (the creation of the universe sequence remains one of my favorite film sequences of the last ten years) and features one of the best performances of Brad Pitt's career, in addition to a marvelous performance from Hunter McCracken as the young man struggling to understand it all. This is a glorious film about the miraculous and humbling experience of being alive.
Posted by Norma Desmond at 8:00 AM