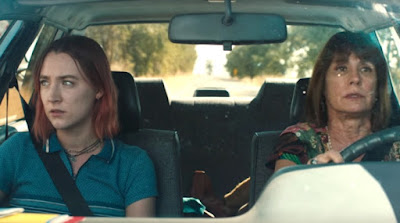 Lady Bird is the movie that most coming of age movies wish they were. It's funny and sharp and sweet, its characters are so well-realized that you want to both hug them and smack them, and its performances are so great that it's hard to pick which one is best, though Saoirse Ronan might get the edge by virtue of being the film's star and the focus of nearly every scene. As an actress, Greta Gerwig has long-since established herself as a darling of indie film, and as a writer she has established herself as a keen comedic observer of Millennial anxiety. Now she begins to make the case for herself as a director to be reckoned with, one capable of making the absolutely ordinary into something exceptionally compelling. Lady Bird is easily one of the best movies of the year and one of the best films of its type.

Set over the course of the 2002-03 school year, during which its eponymous hero will graduate from high school, Lady Bird is about a girl who very much wants to stand out from the crowd, while at the same time very much wanting to be safely ensconced within the crowd, and desperately wants to get out of Sacramento, which she sees as a cultural backwater, and escape East, which she imagines as the glamorous center of high culture. Her name is actually Christine (Saoirse Ronan) but she has given herself the nickname "Lady Bird" which, taken with her bright red dyed hair, suggests a girl trying to cultivate an image as an eccentric, someone that people talk about and find interesting. In truth she's pretty typical and what she goes through during the course of the film is pretty typical, too: she meets a boy (Lucas Hedges) who's nice but ultimately not the boy for her, then meets another boy (Timothee Chalamet) who isn't so nice and who she is destined to look back upon with wonder at how she fell for his faux-sophisticate schtick for even a minute; she has a best friend (Beanie Feldstein) but drifts away from her as she seizes an opportunity to form a friendship with one of the school's most popular girls; and every day she does battle with her mother, Marion (Laurie Metcalf), over literally everything.

The relationship between Lady Bird and her mother forms the heart of the story, with the former determined to pursue her dreams - if her vague notion of getting out of Sacremento and going to New York to do... something can be called a "dream;" she hasn't fully formed her own ambitions yet, she just wants to be around the creation and discussion of art - and the latter trying to bring her daughter down to earth so that her plans for the future more closely accord with the family's precarious financial situation. The issue of money is the story's most constant refrain as Marion tries to impress upon Lady Bird that money is tight without having to come right out and tell her that a $3 magazine could break the budget, and Lady Bird tries to cobble together the illusion that she comes from wealth so that she can fit in with her new friends and enlists her father (Tracy Letts) to help her secretly apply to universities in New York and for the requisite financial aide. Pretty much every teen movie grapples with calamitous young love and friendships that become strained by the process of growing up, but fewer tackle the issue of class and fewer still do it quite so well as Lady Bird, in which the protagonist's understanding that her family doesn't have a lot of money, but lack of understanding that what they have (or don't have) isn't an indication of how much effort was put into acquiring it, deepens the conflict that already exists between her and her mother.

The push-pull of Lady Bird and Marion's interactions drives many of the film's scenes. They love each other, but Lady Bird can be a bit of a brat (a dramatic brat at that - the film's opening sequence features the two of them having an argument, which Lady Bird brings to an end by opening the door of the moving car and tossing herself out) and Marion can be kind of hard on her - but, on the other hand, someone has to be, if only to make her work with reality as it actually is, rather than as she wants it to be. At one point the two have a conversation that quickly devolves into an argument and Marion tells her daughter that she's just trying to help her become the best version of herself that she can be. Lady Bird counters by suggesting that she may already be the best version of herself that she's ever going to be and the look on Metcalf's face says it all and would be reason enough to give her a Best Supporting Actress nomination even if she didn't earn it in every other second she was on screen anyway.

The acting across the board is excellent - Feldstein, as the friend who wants so much to be like Lady Bird and then gets left behind, was a revelation to me, since the only thing I knew her from prior to this was Neighbors 2 - but they also have the advantage of working with an extraordinarily strong screenplay from Gerwig. Some characters, such as both boyfriends played by Hedges and Chalamet and Stephen McKinley Henderson as Lady Bird's drama teacher, only appear in a few scenes but are so well-drawn that those few scenes are all that's needed. Perhaps the most surprising thing about Lady Bird is that it only runs to 93 minutes because it's so rich and explores so many of the relationships in its protagonist's life in a way that feels full and true and resonant. This is just a great movie, through and through.
Posted by Norma Desmond at 10:32 AM