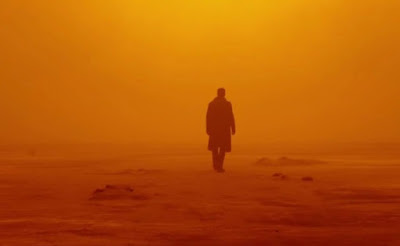 At the risk of losing my movie nerd cred, I have to admit that I don't particularly care for the original Blade Runner. I can't remember which version it was that I saw (I know it wasn't the one with the voice-over, but that still leaves six other versions), but I remember find it overall... boring. That makes me both the worst and the best possible audience for the late-coming sequel Blade Runner 2049. The worst because it took a lot to get me to the theater to see it (the nearly 3 hour running time didn't help), the best because I didn't watch it while gnashing my teeth over the ways that it departs from/doesn't live up to the original. I liked it - mostly. There are some elements that I had issue with, but I never felt less than engaged with the movie and I think that it's a solid (and breathtakingly beautiful looking) science fiction drama.

The detective in this story is K (Ryan Gosling), who is aware that he is a replicant and is tasked with tracking down and retiring those who have gone off the grid and try to pass as human. As the film opens he comes face-to-face with one of these (Dave Bautista), which leads to a discovery that sends K on a mission to track down something that should not exist: a child born to a replicant. His boss (Robin Wright) warns that the investigation must be kept secret lest word gets out that it's possible for replicants to reproduce, but K's first lead takes him to the Wallace Corporation, which took up the business of making replicants after the Tyrell Corporation went under, and him showing up to take a peek at what remains of the old records tips off the company's namesake regarding the discovery. The Wallace Corporation is run by Niander Wallace (Jared Leto), milky-eyed and cruel for the sake of being cruel, who has a vested interest in learning the secret to replicant reproduction as it would allow him to produce more slave labor, and he sends his enforcer Luv (Sylvia Hoeks) to shadow K's investigation and get hold of the replicant child before K does.

The original Blade Runner, in all its incarnations, was so influential in terms of the look of science fiction/dystopian movies that the film is one of those dividing lines in art: there was before Blade Runner and after Blade Runner. However, one of the strengths of 2049 is that, unlike a lot of films which merely imitate the look of the original film to use it as a stylistic shorthand meant to stand in for world building, it actually builds on and expands the world established by Ridley Scott's film. The rain-swept Los Angeles, its darkness punctuated by neon signs and advertising, is the setting for significant portions of the story, but it also moves out to the ruins of San Diego, where an orphanage/child labor camp exists in the massive scrap heap of what remains of the city, and the orange, radiation filled Las Vegas, where K locates Rick Deckard (Harrison Ford). 2049's director Denis Villeneuve, cinematographer Roger Deakins, and production designer Dennis Gassner create stunning vistas that make for a film that is rarely any less than visually arresting, bringing the viewer so deeply into the world of the film that you just sort of float along the currents of its narrative, waiting to see where it takes you next, as it unspools itself.

The look and feel of 2049 are stellar, but I wasn't entirely enamored by the film as a whole. In general, I'm not a fan of Leto and his appearance here does nothing to change that position, his one-note villain being all soft-spoken menace and telegraphed acts of violence. I'm also not crazy about the film's depiction of women, both in terms of the ones who appear as actual characters - including K's holographic girlfriend Joi (Ana de Armas), replicant prostitute Mariette (Mackenzie Davis), and Dr. Stelline (Carla Juri), a woman known for crafting the most realistic memories for implantation into replicants but who is also a woman literally placed in a protective bubble - and in terms of the statuary on the outskirts of Las Vegas, enormous naked women (save for their high heels) in sexually suggestive poses. 2049 depicts a grim vision of a potential future, so the issue isn't that misogyny and the commodification of women has no place in the story, it's the way that the film goes about it. If 2049 only featured one or two of these elements (the statues, the prostitute, the girlfriend who is programmed to do nothing but be devoted to her master and spends much of the story literally in his pocket, the scene in which Wallace stops just short of molesting a newly born female replicant, the fact that the whole thing hinges on the notion that humanity is determined by a woman's reproductive ability) I probably wouldn't have been so troubled by it. Similarly, if the film had gone a bit further to explore what is suggested in a scene between K and his boss, in which it appears that she's contemplating using her position of power for a sexual purpose, so that this kind of subservient sexualization was depicted as something that doesn't just affect women, it may have provided enough balance to make the rest seem less gratuitous. But as it is it just feels like a parade of the same tired tropes that have been seen over and over again in various forms, and I'm just really over it.

All of that being said, I ultimately did like Blade Runner 2049. The story is engaging - though it does more hand-holding than it needs to, because God forbid you let the audience walk away and think about what they've just seen in order to put the pieces together when you can just replay scenes from earlier in the film to make sure there's no ambiguity or debate about it - and Gosling is solid in the lead, bringing a touch of soulfulness to the character that does the heavy lifting in terms of providing the story with a bit of emotional complexity. Ford, who only appears in the last third of the film, is also good, delivering a performance that suggests an abiding affection for Deckard and Blade Runner and its mythology. I didn't like everything about Blade Runner 2049, but I liked enough about it to recommend it and enough that, if it manages to get a sequel (which seems a bit unlikely, given the box office, but you could have said the same thing about the original Blade Runner) I'd give it a chance.
Posted by Norma Desmond at 8:00 AM