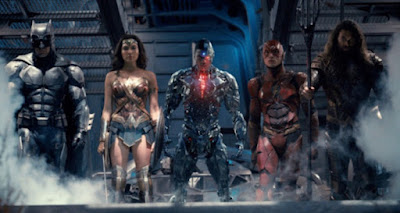 You know what? It's not terrible. That's not just lowered expectations speaking, either, because I had low expectations when I saw Batman v Superman and that movie still managed to sail right under the low bar my mind had set. It's not a great movie - it's got the problems you would expect not only from a film that had to be significantly re-shot but also from a project driven by the impatience of those who are guiding it to the screen - but it's pretty entertaining in a silly, weightless kind of way. Which is why it's so unfortunate that audiences, having been burned by 2 of DC's last 3 movies, seem to be staying away. I mean, Justice League doesn't deserve to make Wonder Woman level money, but it definitely deserves to make more than Batman v Superman and to not be the movie that fails to make enough money to render its critical reception moot.

Set in the aftermath of Batman v Superman, Justice League finds the world mourning Superman (Henry Cavill), and Batman (Ben Affleck) and Wonder Woman (Gal Gadot) preparing for a coming battle with Steppenwolf (Ciaran Hinds), who attempted to conquer Earth thousands of years ago only to be expelled by the unified forces of the Amazons, the Atlanteans, the Olympian Gods, the Green Lantern Corps, and the tribes of man. When he was defeated the first time he lost control of the three Mother Boxes which gave him unfathomable power, one of which has been kept under guard by the Amazons, one of which has been kept under guard by the Atlanteans, and one of which was given to humans who... buried it in a hole and then promptly forgot about it and the history of how they came to have (in explaining all this Wonder Woman makes the point that the boxes were kept by different tribes because they were too powerful to be kept together, which begs the question of why one wasn't given to the Green Lanterns and taken off Earth entirely). Knowing that they'll need greater numbers to go up against Steppenwolf, Batman and Wonder Woman go about recruiting the metahumans located by Lex Luthor in Batman v Superman - Barry Allen/Flash (Ezra Miller), Arthur Curry/Aquaman (Jason Mamoa), and Cyborg (Ray Fisher) - but for some reason don't recruit the rest of the Amazons, the rest of the Atlanteans, or the Green Lanterns, though they do come up with a plan to resurrect Superman.

Although Zack Snyder is the only credited director, Justice League underwent two months' worth of reshoots (or 1/3 of what Snyder originally shot) under the direction of Joss Whedon, who does get a co-writing credit for writing new, ostensibly light and/or funny scenes after Warner Bros. finally realized (about three movies later than it should have taken them to) that when people say they don't like how dark and murder-y the direction of the franchise is, it should probably be a little less dark and murder-y. Justice League ultimately is less dark and less murder-y, with a greater sense of fun than all the DC movies not called Wonder Woman, but you can definitely tell that this is something that's been ripped apart and stitched back together. I couldn't tell you exactly which parts of the film are the "Snyder vision" and which parts are the "Whedon vision" (though I'm sure that somewhere on the internet someone is preparing a detailed breakdown), but I can say that the finished product is noticeably different from what was suggested by that original trailer released in the summer of 2016.

However, while the seems definitely show, I wouldn't say that Justice League is wildly uneven in terms of its tone or its vision. Whatever Snyder or Whedon or the editing team had to do to put this all together into a story, it does ultimately feel like "a story." It's a story with a few diversions - one of the problems with the DC Universe is that it jumped straight into assembling its team rather than establishing its team members across their own films, which means Justice League stops to elaborate on the back stories of Flash, Cyborg and Aquaman before it gets to the meat of the narrative, but only the pause for Aquaman is clunky enough that I would call it a problem because based on the conversation he and Mera (Amber Heard) have, I'm left to believe that either this was the first time Aquaman ever actually visited Atlantis and the first time he and Mera ever meet, or that both are aware that they're characters in a movie and have to explain to each other things that they should already know because the audience doesn't know them yet - but it's also one in which I felt consistently entertained. It's a mixed bag of good and bad things, but on a 1,000 point scale, I'd say that the math ultimately just works in its favor:


100: my expectation level going in

+ 300: the presence of Wonder Woman, which even WB/DC apparently can't screw up

- 150: Affleck appears to have lost interest in the project somewhere between the original shoot and the re-shoots, which is a shame since I thought he was one of the better things about Batman v Superman

+ 250: the big brother/little brother dynamic between Superman and Flash, which helps it to emerge as the only genuine feeling relationship between the members of the team

+ 300: it's lighter than the previous Snyder films and plays like it actually enjoys being a superhero movie

- 100: it's lighter overall, but the actual humor falls flat about as often as it works, with some laugh lines dying in awkward silence

- 50: should Aquaman really be cooler than Batman, though?

- 400 / + 150: the CGI often doesn't look great, particularly during the big final battle, where it looks pretty terrible. On the other hand, I didn't even notice the movie's most discussed bad CGI, namely the erasure of Cavill's Mission: Impossible 6 mustache. I can definitely see it in still images from the film, but I didn't notice it in motion

+ 200: Miller is quite enjoyable as Flash, so I hope that WB/DC figures out what it's doing and doesn't tank the whole franchise before getting to his solo film

- 300: the third act crisis is brought about as a result of our heroes being dumb and/or lazy (take your pick) and just standing there and watching Steppenwolf take one of the Mother Boxes because none of them could be bothered to walk (or fly!) over and retrieve it despite its great importance

+ 250: despite having died, the Superman of Justice League no longer seems tormented by the burden of being hero; he wears his happiness well

- 50: but before getting to his happy place, Zombie-Superman has a fight with the rest of the team which for some reason does not end with someone shouting the word "Martha!" I legitimately would have rated this 4 stars if that had happened

Justice League has its share of flaws, including a pretty lame villain (though this is a problem that many comic book movies share; a good villain is the exception, rather than the rule) and the decision to make the hero who is the least well-known outside of the movie the least explored character in the movie, but I thought it was perfectly fine as a popcorn movie. It doesn't come close to being the kind of movie that's so good it transcends its genre trappings, but within the confines of the comic book movie, it's a decent enough movie and an easy, entertaining watch.
Posted by Norma Desmond at 8:00 AM