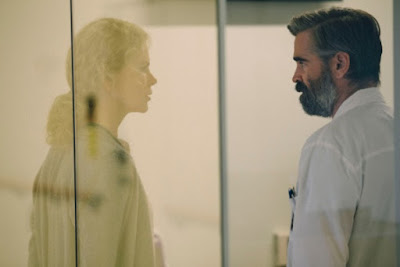 "It's a metaphor." Flesh for flesh. He's not saying it's right, necessarily, but it's the only way he can see to balance the books and make them both whole. Yorgos Lanthimos' latest film is built around a long standoff between a teenage boy driven by righteous certainty and a middle-aged man who thinks he can put off the inevitable, with three other lives caught in the middle. The Killing of a Sacred Deer is neither as bonkers as 2009's Dogtooth nor as darkly delightful as last year's The Lobster. In truth it's a little bit of a slog, relentless in its brutality and building little narrative momentum as it puts its characters through the paces of psychological torture. I wouldn't say that I hated it, and I certainly wouldn't say that it isn't a skilled piece of work, but by the time it was finished I was definitely ready for it to be over. If you're going to see it I recommend seeing it cold and knowing as little about the plot as possible, so consider this a spoiler warning.

The man is Steven Murphy (Colin Farrell), a cardiologist with a wife, Anna (Nicole Kidman), and two children, Kim (Raffey Cassidy) and Bob (Sunny Suljic), who has been having clandestine meetings with Martin (Barry Keoghan), a teenager who has a powerful hold over him. One might call Martin's demeanor "unsettling," but this is a Yorgos Lanthimos movie so everyone's demeanor is kind of unsettling; even so, his relentlessness, regardless of how politely and dispassionately it is delivered, leaves you waiting for the shoe to drop and shit to get real. The catalyst for all this is that Steven was the surgeon who was operating on Martin's father, who ultimately died. Now Steven is trying to appease Martin, who is constantly showing up at the hospital, making demands on his time, and trying to push Steven towards his mother (Alicia Silverstone). Despite this, Steven decides that the best course of action is to invite Martin over to his home and introduce him to his family, which of course only allows Martin to insinuate himself further into Steven's life.

The film takes its name from the myth of Iphigenia, one of the daughters of Agamemnon. In the myth, Agamemnon kills a deer in a grove that is sacred to the goddess Artemis and as punishment she prevents his fleet from sailing for Troy. In order to placate the goddess and set sail, Agamemnon must sacrifice Iphigenia. In keeping with the myth, Martin eventually presents Steven with a similarly terrible bargain, telling him that he will have to choose a member of his family and then kill him or her in order to make amends for having killed Martin's father. If Steven does not make this sacrifice, then all three members of his family will die a horrible death which will start with paralysis and end with bleeding from the eyes. Like a god, Martin appears to have the power to relieve the afflicted of their symptoms when he wants to make a point, but overall he remains at a distance from the situation as Steven tries to reason his way out of the situation, refusing to believe that Martin has any true power over him and his family.

If it's about anything, I think that The Killing of a Sacred Deer is about accountability. Steven refuses to accept responsibility for Martin's father's death, at one point telling Anna that when a patient dies on the operating table it's never because the surgeon is at fault, but it can sometimes be as a result of an error made by the anesthesiologist. He holds to this argument even as he acknowledges that he had been drinking the day of the surgery. Later, an anesthesiologist will tell Anna that when a patient dies on the operating table, it can only be the fault of the surgeon, never that of the anesthesiologist. He happens to have been the anesthesiologist who was part of the team working on Martin's father, who at first claims not to remember the surgery and then suddenly remembers it when he thinks his information might be exchangeable for a sexual favor. Neither man wants to be accountable for what happened and what Martin demands is accountability, which is why Steven finds himself faced with his choice. Martin can't make him verbally admit to being responsible for his father's death, but he can force him to take responsibility for either the death of one family member at his hands or the death of all three members of his family through his inaction - at least, he thinks he can. In actuality Steven will find a loophole that will allow him to do as Martin demands without really having to make the choice and instead leaving it to fate, but it seems fitting for Lanthimos' dark sensibility that no one really gets what they want even when it might appear that they do.

Lanthimos is a skilled filmmaker and many of those skills are on display in The Killing of a Sacred Deer, even though the film ultimately left me a bit cold. It's a technically strong movie in which Lantimos is able to build tension out of what almost amounts to thin air in several scenes, and which makes such evocative use of the pristine, bright white setting of the hospital, where several scenes take place, that it almost feels like a science fiction movie (one shot, in particular, is so reminiscent of 2001: A Space Odyssey that you'd think it was lifted right out of that movie were it not for Farrell's presence). It's also, despite Lanthimos' deliberately alienating style, strong on the performance level, with Keoghan delivering an incredibly effective performance that is at once blank and calculating and makes Martin feel like the personification of the banality of evil, and Kidman finding another level to the material, working within the confines of the robotic quality that Lanthimos demands but also making the character feel (mostly) recognizably human. My real qualm with the film is that it doesn't have a very good handle on the tone, with certain moments that seem like they're supposed to be comedic beats falling flat, and that drags everything else down. In the end I respect its ambition and the formal skill that went into it, but The Killing of a Sacred Deer really didn't do much for me.
Posted by Norma Desmond at 8:00 AM