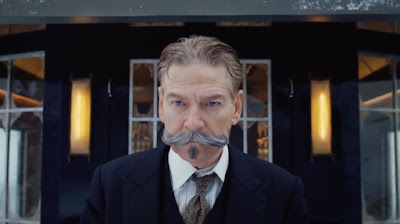 Murder on the Orient Express is a delightfully old fashioned movie. This isn't just because it's based on a novel from 1934, but because it feels like a throwback to the era when studios would throw all their top flight contract players into an elegantly rendered, dialogue-heavy production, and because it is filmed in a very classic style and fashion. I've never seen the other adaptations of the novel, so I have no opinion on how this one stacks up against them, but I can say that I enjoyed this one immensely. It's an easy movie to enjoy - filled with stars, turning on a plot that's luridly engaging without being too complex, and it looks great - and it's a pleasure to watch a high profile movie that doesn't feel like it's aimed at appealing to men aged 14 to 25 first and everyone else well afterwards.

The story begins with Hercule Poirot (Kenneth Branagh), the greatest detective in the world (he hedges by saying "probably," but it's pretty obvious that he believes his own hype), closing a case in Jerusalem and then being called to London. Upon boarding the Orient Express to make the journey, he joins a cast of colorful characters who can each be summed up with a simple noun - the gangster (Johnny Deep, for once not the actor in the cast whose costuming calls the most attention to itself), his valet (Derek Jacobi), and his lackey (Josh Gad), the divorcee (Michelle Pfeiffer, luminous and terrifically compelling), the nun (Penelope Cruz), the Princess (Judi Dench) and her maid (Olivia Colman), the doctor (Leslie Odom Jr.), the governess (Daisy Ridley), the Nazi (Willem Dafoe), and a mysterious Count (Sergei Polunin) and Countess (Lucy Boynton) - one of whom will turn up dead and with a connection to the most famous crime of the day - a crime that Poirot was asked to help solve, but that he could not get to in time.

Even if you've never seen a version of it or read the novel, you quite likely know how the mystery of Murder on the Orient Express resolves itself. I knew the "whodunnit" part of the solution but not how the plot got there or that it all turns on a fictionalized account of the Lindbergh kidnapping, so while I wasn't surprised by the ending, the film did manage to keep my interest as it showed how the pieces fit together and explored the motivation that drove the crime. As with any tidily resolved mystery you have to give a certain amount of leeway for coincidence and convenience in the events that allow it to be solved, but the pleasure that the film takes in guiding you through it and the skill of the actors involved, makes that pretty easy. As Roger Ebert once wisely said, it's not what a movie is about, it's how it is about it that matters, and Murder on the Orient Express is a tale well-told which easily holds your interest even if you know what's coming.

Although it's a very stationary story, in that it takes place almost entirely within a train that for much of the movie isn't even moving as a result of an avalanche having derailed it, Branagh is able to produce the feeling of movement by making excellent use of that closed space both by shuffling scenes through various parts of the carriage (and a few outside the train itself) and by playing around with camera angles, using overhead shots that give the audience a bird's eye view of the layout of the carriage and which has the effect of making the scene of the crime look sort of like a crime scene sketch. It's playful in this way without feeling gimmicky, and as I watched it I felt much the same way I often feel when watching a Steven Spielberg movie, that I was being told a story by a filmmaker with a keen understanding of cinematic grammar and how to use it to its best effect. It's a well put together film and a well balanced one, finding room for notes of humor and lots of charm even as the story itself gets increasingly dark.

If there's a flaw to the film, it's that some of the characters aren't very developed (though I'm ultimately not sure how much that matters given the finale's revelations that some of them are not who they appear to be, so the film would just be developing false personas anyway) with Cruz, Dafoe, Jacobi, and Colman, in particular, having very little to do and Polunin and Boynton disappearing for so long between their first and second appearance that when the film returned to them that second time I actually thought to myself, "Oh yeah, those guys." Branagh is very much the star of the show as his eccentric detective, obsessed with the idea of balance in the universe, drives every scene, but room is ultimately made for Ridley, whose character Poirot develops an affinity for, Odom, who gets more to do by virtue of the clandestine relationship between his character and Ridley's and because of his character's involvement as the doctor helping to unravel the facts of the crime scene, and Pfeiffer, who emerges in the film's final act as its emotional center and delivers a performance that defines the film's climax. While Murder on the Orient Express isn't a revolutionary film by any stretch, it's definitely one that shows the pleasures to be had in a film that aspires merely to be a ripping yarn full of beautiful people wearing beautiful costumes in a beautiful setting.
Posted by Norma Desmond at 8:00 AM