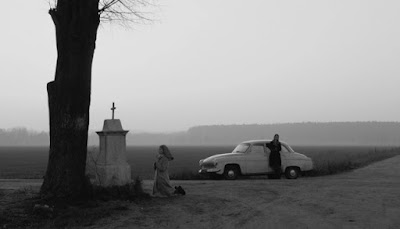 Ida is the story of a young woman preparing to become a nun with production elements as austere as the life its protagonist is considering entering into. It’s filmed in stark black and white, free of a musical score for most of its running time, and the story has been pared down to its most basic elements, played out primarily between just two women over a brisk 80 minute running time. But as reserved as it may seem, it’s a thematically rich and deeply moving film about two women who bond as they grapple with the tragedy in their family’s past. It’s a haunting film about trauma and the savagery that human beings are capable of inflicting on each other, but it’s also a sometimes surprisingly funny movie about two opposites trying to find common ground and work together towards a shared goal. It’s a marvelous piece of work that has the timeless quality and endless re-watchability of the greatest of films.

Ida (Agata Trzbuchowska) is actually Anna, a Jewish orphan who was hidden away in a convent during WWII and raised without being given the full context of how she came to be in there. On the verge of becoming a nun herself, she’s informed that she has one surviving family member, an aunt, and is sent to meet her before she’s allowed to take her vows, at which point she learns that she’s Jewish and that her name before being hidden away was Ida. The aunt, Wanda (Agata Kulesza in a towering performance), is a Judge and is curt and to the point when her niece turns up at her door: they’re the only two left, the rest of the family was murdered by the Nazis, there are no graves to visit, and now that that’s been established they can once again go their separate ways.

But that coldness with which Wanda greets Ida/Anna is quickly thawed because that brusqueness is really just a mask for the deep burden that Wanda has been carrying as the keeper of memories, the one who knows exactly what they’ve lost. She has spent the years since the war channeling her grief into rage, becoming known as “Red Wanda” for the intensity with which she prosecuted enemies of the state, without really coming to terms with what happened. Though she acts like seeing her niece is a chore, this is her doing – the convent has been sending letters to her for years but it’s only now that her niece has been sent to see her because she finally decided to respond and ask to meet her, and that’s why just as quickly as she turns Anna away, she has a change of heart and goes to find her at the train station: she knows that the time has come and that she can no longer shrink away from re-opening the wound.

The screenplay by Rebecca Lenkiewicz and director Pawel Pawlikowski turns on the evolving relationship between Anna and Wanda, two women who are so different from each other that watching them go back and forth is one of the film’s greatest entertainments, and seeing the way that they quietly form a bond is one of its most moving elements. They are total opposites, Anna serenity personified, a rule-follower who believes in the basic goodness of people and trusts that God has a plan, and Wanda a woman hardened by experience and possessed of a dry, caustic wit in addition to being a functioning alcoholic; but they’re alike in certain ways, too. Wanda is a force to be reckoned with, a woman who will simply steamroll over whatever is in her way and though Anna is much softer in her manner, she’s just as immovable a personality, meeting Wanda’s constant challenges to her belief in God and religion with little more than a calm, self-possessed look, unshakeable in what she believes. What grows between them is not just love borne of sharing the same roots and the same grief, but a mutual respect borne of finding in each other a formidable opponent, and the way that Kulesza and Trzebuchowska chart this progression, supporting and building off each other and creating a relationship of great complexity and nuance, gives Ida an emotional bedrock that makes it all the more emotionally shattering as they seek out what will give them closure to their family tragedy and as a related development gives Anna cause to directly confront the great “what if” of her life: What if she had grown up as Ida? What if she became Ida now?

Ida is a masterfully told story, but it’s also a masterfully styled one that makes for a film as visually striking as it is emotionally rich. The film’s 4:3 aspect ratio has the effect of allowing the film to express both the minute detail and the grander picture, making the story feel deeply personal whenever Pawlikowski films the characters in close up, and then re-contextualizing their story as a small part of a bigger picture whenever Pawlikowski switches to long shots, where the characters sometimes occupy only one corner of the frame while the rest is empty space, making them seemed dwarfed by their surroundings like little specs in a large world. The choice is an effective one that allows the film to alternate between the brutally intimate and something more objective and detached, telling the specific story of two women uncovering the circumstances of their family’s tragedy as well as a larger tale of a societal tragedy shared by everyone who was there and by the generations which would follow. Ida is a film that resonates immediately, a work of great craftsmanship and artistry which displays no weaknesses. It’s a masterpiece and a marvel, one of the great films of our time.
Posted by Norma Desmond at 8:00 AM

I just couldn't get with this movie. It was shot beautifully, and I'll agree that Agata Kulesza was awesome in her role, but I found Ida's journey less than enthralling and not entirely believable. The entire time I was watching it I was thinking that a film strictly about Wanda would so much better.