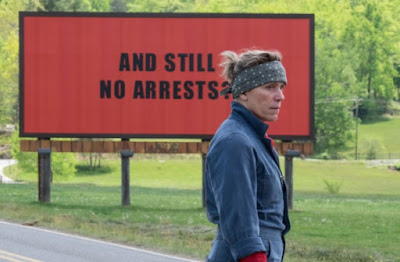 We are living in an extraordinarily angry time (or maybe it just seems that way because the internet makes that anger inescapable) and Martin McDonagh's Three Billboards Outside Ebbing, Missouri functions like a snapshot of that overriding cultural emotion. It's a film about people who are angry about circumstances they cannot change and who, without any productive outlet for that emotion, have nothing but the violence and pain they're capable of inflicting so that the outside world is as chaotic as they feel inside. If you're familiar with McDonagh's previous features In Bruges and Seven Psychopaths, you'll be prepared for the violence of Three Billboards and for the fact that the film often finds a comedic beat or two in the midst of that violence, but what sets this film slightly apart from those previous two is how deeply felt it is on an emotional level. It's angry and then that anger begins to fade into despair and it just leaves you feeling wrecked in the best possible way.

The three billboards of the film's title are purchased by Mildred Hayes (Frances McDormand) in an attempt to hold the local police detachment's feet to the fire so that her daughter's murder will be solved and her killer brought to justice. The billboards specifically name the town's Sheriff, Bill Willoughby (Woody Harrelson), which many people take objection to due to their sympathy for the man, who is himself dying of pancreatic cancer, but Mildred is unmoved by the argument because, dying or not, he's still the Sheriff and the buck has to stop with him. Someone has to be held accountable and if it can't be the person responsible for the crime, it will have to be the people who have not solved the crime. This premise sets the two characters up to be antagonists, and though they sort of are in a philosophical sense, when you get down to it they're really not. Like every relationship and every character in the film, it's a lot more complex than that.

There's nothing "easy" about how the film sets up its characters and how they fit into the big picture. Mildred is the protagonist, which makes her the obvious point of identification for the audience, but McDonagh and McDormand don't allow her that identification to be simple or uncomplicated. She's not just a woman on a tireless crusade for justice, characterized by the kind of spotless nobility that Hollywood loves to hang a movie on; she's a woman who tirelessly crusades for justice in a way that is painful to the people who share her loss - her son (Lucas Hedges) is not only given a hard time at school by people who think Mildred should give Willoughby a break, all things considered, he also angrily points out to her that every time they drive past those billboards, he has to think about the horrible way his sister died, and her ex-husband (John Hawkes) is livid and thinks the billboards will do more harm than good - and whose grief and guilt is expressing itself in a general nastiness to those around her (many of whom deserve it, but your heart breaks a bit for the character played by Peter Dinklage) and in acts of violence. The closer the film gets to its conclusion, the wider a view it takes of the characters and the situation and the more it muddies the waters in terms of who you should be rooting for and what you should be rooting for them to do.

This extends to the story's villain - though that designation comes to seem increasingly too simple as the film goes on - Jason Dixon (Sam Rockwell), a police officer and a racist dumbass who lives with his mother (Sandy Martin), a nasty piece of work herself, and is known through town for at least one incident in which he brutalized a black person in custody. Like Mildred, he's a person who is firmly in touch with his capacity for violence and though he's treated like something of a joke at first, the film explodes that notion during a sequence in which he gives full vent to his rage and we see what he's capable of doing, bringing the vague references to his torture of an inmate into clearer view. However, also like Mildred, he's not a character reduced to one dimension or a trope; he's capable of earning redemption and he's even, towards the end, capable of eliciting viewer sympathy. McDonagh is dedicated to depicting the messy reality of human beings, that good people are capable of doing bad and selfish things, that bad people are capable of doing good and selfless things, that opponents can still care about each other's well-being, and that grief can drive us to extremes.

Three Billboards Outside Ebbing, Missouri is a story about people who are in pain and many of its scenes are driven by the rage that they feel at their helplessness, yet there is also a great deal of grace in the story, moments of kindness, moments in which people behave to the best of their capabilities instead of the worst. This is true at the end when, after a series of attacks and counter-attacks, the damn breaks and all that rage begins to subside into something else, leading to a note-perfect ending in which the two characters you would have thought least likely to come to any accord, let alone find some peace together (even if only for a moment) do just that. Three Billboards is being sold as a dark, hard comedy and it is, at times, quite funny, but it also has emotional depths that make it very moving and emotionally engaging. McDormand, Rockwell, and Harrelson all deliver incredible performances, full of fire and nuance and humor and poignancy, and McDonagh's screenplay and direction makes the most of the talented cast that he's assembled. Three Billboards is a film that feels very much like it's of our time, but which is so skillfully crafted and executed that it should continue to resonate well beyond the current zeitgeist.
Posted by Norma Desmond at 8:00 AM