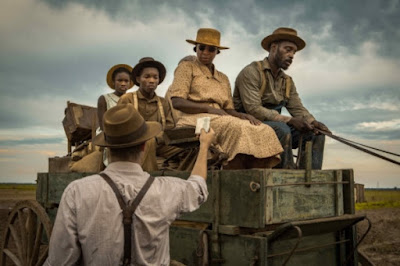 Societies are built on bodies. This fact isn't exclusive to the United States, though it may sometimes feel that way because the legacy of those bodies continues to echo so resoundingly through its contemporary social and political climate. Dee Rees' historical epic Mudbound opens by acknowledging this through two of its characters digging a hole and turning up a set of chains followed by the remains of a slave, and then builds by demonstrating how the condition of slavery is perpetuated in spirit if not in name as it explores the relationship between two families, one black and one white, in the years just prior to and just after World War II. It's a great achievement, a period film that does not just have the look of something important, but actually is important, speaking not only to the past but also to the present. It's a vital, brutal, and engrossing movie.

Mudbound is a story told in a symphony of voices, perspectives that are at odds with each other and which complement each other and which paint a portrait of a place that steadfastly refuses to move forward into the future. The players are the McAllan and Jackson families, the former farm owners and the latter tenant farmers. The McAllans are Henry (Jason Clarke) and Laura (Carey Mulligan), their two young daughters, his brother Jamie (Gerrett Hedlund), and father Pappy (Jonathan Banks); and the Jacksons are Hap (Rob Morgan) and Florence (Mary J. Blige), their eldest son Ronsel (Jason Mitchell), and their three younger children. The two families come into each other's orbit during WWII, when both Jaime and Ronsel are fighting overseas, after Henry buys a farm and abruptly moves Laura and their girls from Memphis to the Mississippi Delta, a way of life for which Laura is ill-equipped and which requires the frequent assistance of Hap and Florence.

That assistance is something that Henry and Laura treat as something that they're entitled to and Henry has no qualms about calling on them whenever he has the need, disrupting their meal to demand immediate assistance in unpacking their belongings, insisting that Florence come to help Laura tend to their children as they suffer from whooping cough, dragging her away from her own small children, and pushing Hap to rent a mule from him and get back on his feet and back to work after Hap breaks his leg. The land that Hep and Florence work is the land that their people have been working for generations, first as slaves then as tenant farmers, though the distinction seems to matter little as they are expected to be constantly on call to see to the needs to the McAllans, putting them and their needs first even as they're subjected to the abuses of Pappy and of Henry himself, who may not ever utter a slur but makes it clear that he believes that if they're attacked, it's because they've provoked it by not knowing their "place."

There's a moment in the film when Laura does something that surprises everyone, defying Henry and repaying some of what the Jacksons have done for them, prompting Florence to remark via voice-over that until then she thought all white people were the same. In a lesser and far more familiar film that would be the lens through which we saw this story, from the perspective of Laura and Jamie, who forms a friendship with Ronsel based on their experiences during the war, as "good white people" who are capable of seeing black people as fellow human beings, but Mudbound is not that film. Laura and Jamie do not save the Jacksons and the story is not about their triumph over the bigotry of the people around them; instead it's about the Jacksons, people who keep striving to one day attain what has always been kept out of their reach, parents who want their children to want more for themselves and admonish their daughter not to call her brother "a fool" and tell their son that if his sister wants to be a stenographer even though there are no black stenographers then she'll be the first. Theirs is a compelling story of strength and endurance in the face of unfairness and brutality and it forms the soul of the film.

With Mudbound Dee Rees has created a film that is sometimes reminiscent of Terrence Malick due to its use of multiple voice-overs that flow with the stream of the characters' thoughts and the way it sometimes pauses to take in its surroundings (though unlike Malick, who pauses to take in the beauty of the world, Rees' camera tends to stop to highlight the muck), but which quickly emerges as a work told in its own singular voice and style. It's a film that engrosses immediately, buoyed by the uniformly great performances of the cast, and builds towards a sequence of shocking violence that is wrenching even as it is unfolded with a certain amount of discretion. Rees' 2011 film Pariah is one of my favorite films of the last ten years and announced her as an artist to watch. Mudbound confirms that impression and shows that while the scope of her ambition as a storyteller has grown, she has retained her ability to draw characters in fine, intimate detail.
Posted by Norma Desmond at 8:00 AM