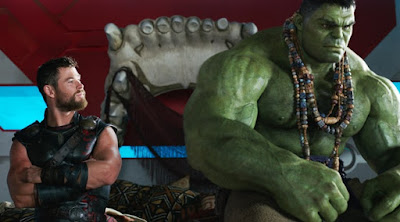 Thor: Ragnarok isn't the best movie I've seen all year, it's not even the best superhero movie I've seen all year, but I'd be hard pressed to name a movie that I had more fun watching this year. There are a lot of things about Ragnarok that can be described as "awesome," from the delicious camp of Cate Blanchett's performance to the scene stealing of director Taika Waititi's performance as soft spoken rock creature Korg to the film's use of "Immigrant Song" in the climax to the relaxed chemistry between Chris Hemsworth and Tom Hiddleston that leads to some of the film's funniest moments to Tessa Thompson's hard drinking, hard fighting Valkyrie. But the best thing about it, from my perspective, is the simple fact that I don't think a movie like this could have been made even as little as five years ago, and certainly not with a budget of almost $200 million. It is weird and silly, like some marvelous fever dream guided by someone who's love of comic books, science fiction, and the '80s has converged into one sprawling and delightfully bizarre vision. So thank you to Guardians of the Galaxy and its surprise success in 2014 for paving the way for this anything goes superhero adventure.

Ragnarok is a film absolutely packed with plot and incident. It starts with Thor (Hemsworth) as a prisoner of Surtur (voiced by Clancy Brown), a demon who intends to bring about Ragnarok (the destruction of Asgard), then moves to Asgard, where Thor finds Loki (Hiddleston) impersonating their father, Odin (Anthony Hopkins), then on to Earth where the pair have a run-in with another Marvel hero before locating their exiled father and learning that they have a sister, Hela (Cate Blanchett), who has been imprisoned since before they were born and has now returned intent on taking the throne, which she claims as her birthright. After she knocks them both into space, Thor and Loki each separately end up on Sakaar, where one manages to ingratiate himself with the planet's ruler, the Grandmaster (Jeff Goldblum), while the other ends up sold as a slave (though the Grandmaster prefers the term "prisoners with jobs") and forced into the gladiator's ring to fight in the Contest of Champions, where he's reunited with the Hulk (Mark Ruffalo), who has been living as the Grandmaster's Champion for two years, keeping Bruce Banner suppressed the entire time. If this sounds like a lot, keep in mind that by this point the movie is only at about the half way point.

Written by Eric Pearson, Craig Kyle, and Christopher Yost, and directed by the ever-impish Waititi, Ragnarok is heavy on the comedy in its first half, even though it pauses for a moment or two of pathos which work effectively to give the story a sense of something actually being at stake. "Asgard" is an abstract concept, a flat-bottomed planet somewhere out there in deep space, and its citizens are just a mass of people without personalities except for being collectively afraid. On their own these things are minimally compelling, in that the idea of places being destroyed and people suffering evokes a baseline level of sympathy, but Thor is able to create a feeling of weight to what's happening on screen through its focus on the relationships between the characters. Some of these relationships have been well worn in by the previous entries in the Thor series and in the larger Marvel universe of films, such as the complicated one between Thor and Loki, while others, such as the one between Valkyrie and Hulk, are new, but they work together to give the story some grounding in real moments of emotion and camaraderie.

Of course, "grounded" might not be the best word for a movie that flies as high as this one, with a production design during the story's sojourn on Sakaar that makes the movie look like an arcade game, a beautiful sequence depicting the last ride of the Valkyries that looks like a painting come to life, and a grand finale with an epic battle that ends up involving three different factions (one of whom has a giant wolf and a zombie army) and in which basically anything goes. Ragnarok aims to be blissfully entertaining and succeeds by giving you a bit of everything, from fast paced action to striking visuals to one of the better Marvel villains so far (not that there's a ton of competition in this regard; Marvel is weirdly bad at villains) to the frequent comedic flourishes of Waititi's irreverent style. Ragnarok doesn't just want to tell a story, it wants you to have as much fun as possible while it tells it.

Here's how successful Thor: Ragnarok is: I've never seen, or felt inclined to see, the previous two Thor movies, but I was excited to see this one from the first trailer. Admittedly, you could chalk this up to the success of marketing, but I'm inclined to give the point to the film itself since it didn't disappoint once I saw it. It's an incredibly silly movie, but it knows that it's silly, it wants to be silly, and it makes silly look very good. So long live the continuing space adventures of Thor and the Hulk.
Posted by Norma Desmond at 8:00 AM