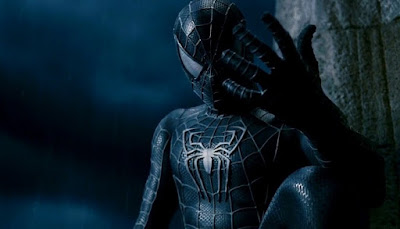 Time can't make a good movie bad or a bad movie good, but for those films that are sort of straddling the line, the ones you might describe as just "okay," time can make the difference. Time might not change the content of the film, but it can certainly change the context of one. In the context of the 2017 film landscape Spider-Man 3 - a film which was considered enough of a disappointment that, despite grossing just short of $340 million domestically alone, Sony decided to scrap the continuation of the franchise and start over again with a new cast, new director, and a slightly different name - seems like a film that was unfairly maligned in its time. In the light of 2017, Spider-Man 3's weaknesses just seem like a common part of the genre, and its strengths have only been brought into sharper relief.


The Story
Picking up where Spider-Man 2 left off, Peter Parker (Tobey Maguire) is now happily dating Mary Jane Watson (Kirsten Dunst), but estranged from their friend, Harry Osborn (James Franco). Having found his late father's Green Goblin technology, Harry is determined to get revenge on Peter/Spider-Man, but he's not the only thorn in Peter's side: Flint Marko (Thomas Haden Church), the man who murdered Peter's Uncle Ben, has been transformed in Sandman, giving Spider-Man a new villain, and an extraterrestrial symbiote crashes in Central Park, giving Spider-Man another new villain when it bonds with Eddie Brock (Topher Grace) to become Venom.


The View From 2007
The Good: "The emotions are so exalted, the movie is like opera without the arias...
Which could be why I liked it. To place a sensitive story in a male-epic genre — to dramatize feelings of angst and personal betrayal worthy of an Ingmar Bergman film, and then to dress them up in gaudy comic-book colors — is to pull off a smartly subversive drag show." - Richard Corliss, Time

The Bad: "The wrong way is to decide you want to make a big movie and then, without much to say, you proceed to throw every possible idea at the screen in the hope it'll work out. That's what Raimi does in Spider-Man 3, which is so clumsy that at times one can sense the filmmaker artificially slowing down one story in order to pursue another." - Mick LaSalle, San Francisco Chronicle


The View From 2017
One of the main complaints about Spider-Man 3 was that it had too many villains, that in stretching itself so thin by telling so many stories, it's unable to tell any of those stories particularly well. Now, it's undeniable that Spider-Man 3 is a very busy movie which finds Spider-Man juggling battles with the New Goblin, Sandman, and Venom, and Peter juggling his relationship with Mary Jane and his flirtation with classmate Gwen Stacy (Bryce Dallas Howard) and trying to repair his friendship with an amnesiac Harry, who sustains a head injury during one of those battles and forgets that his friend is Spider-Man and that he hates him, and continuing to struggle in his grief over the death of his Uncle Ben, and contending with his own darker impulses which are brought to the surface when the symbiote bonds with him and turns him into Dark Spider-Man/douche Peter Parker. However, as valid as the "too busy" criticism might have seemed in 2007, it seems downright quaint in 2017, where being over-stuffed with characters and servicing numerous plot threads is de rigueur for superhero movies. While the sheer amount of plot in Spider-Man 3 might have seemed overwhelming, or even over indulgent, in 2007, it just seems normal in 2017.

Where Spider-Man 3 stands apart from the superhero movies of today is that it uses all of these characters and all of these stories to reach a sense of conclusion rather than to kick start new narrative arcs. Where superhero movies now are part of "shared universes" that tell a story on such a large scale that each entry is working in service of several others, planting seeds that will flower in subsequent films, and furthering a narrative that is supposed to just keep going and going without end, Spider-Man 3 functions in the more classical franchise style of using three films to tell a three act narrative, with the final entry bringing things to a close. While further films in the series were planned, it's safe to assume that those films would have started a new storyline (or storylines) as there's nothing open-ended about this film.

There are essentially three stories being told across the three Raimi/Maguire Spider-Man films. The first is Peter's grief at the loss of his uncle and his feelings of guilt regarding it: in the first film Ben is killed and then his supposed assailant dies accidentally when Peter pursues him, in the second film Peter confesses to his Aunt May his role in the death and is forgiven, and in the third Peter learns that it was actually Flint Marco who killed Ben and that it was an accident and Peter is able to forgive him which will allow him to finally accept Ben's death and move forward. The second story is the fall and redemption of Harry Osborn, which finds Harry swearing to avenge his father's death by killing Spider-Man at the end of the first film, discovering that Peter is Spider-Man and that his father was the Green Goblin at the end of the second film, and in the third film becoming the New Goblin and seeming to fully give in to his dark side before rediscovering his humanity and helping Spider-Man take on Sandman and Venom. The third story is Peter's relationship with Mary Jane, which finds him pining for her in the first but pretending that he only wants to be friends in order to protect her, her discovering his identity in the second and them becoming a couple, and then the third exploring the unique difficulties Mary Jane faces in being the girlfriend of a superhero, particularly once all the adulation towards Spider-Man begins going to Peter's head, and the relationship becoming strained and then breaking before they're able to reconcile at the end. While the crowded nature of the plot, with three new villains added to the mix, might be overwhelming, at least it can be said that each of these villains serves the purpose of furthering and concluding these stories - which are at heart such classic stories of guilt, betrayal, and love that their roots might extend all the way back to the Greek tragedies of the heroes of the epic cycle who were undone by their all too human flaws - that have already been in motion over the previous two films.

In that respect, I think that Spider-Man 3 is narratively sound, going big in order to match the big emotions necessary for the catharsis that's been building over the course of three films, and although it's the third entry in a three film story, it's able to stand on its own as a film. It can be enjoyed and easily followed on its own without the need to watch the first two to understand what's going on here, as each of the three main threads is re-introduced before being plumbed for further depths. That said, it's not a film without flaws. For one thing, it might have done well to choose a different villain than Venom as the final member of the trio, if only because the character acting as catalyst for the darker impulses of those it bonds with creates such interesting narrative avenues that it would be of better use in a film where it was the only villain and there was more room to fully explore both the two sides of Peter as a person, as well as the mirroring of Peter/Spider-Man and Eddie/Venom. Playing out as it does here, competing for time with other stories, it's given pretty short shrift. For another, and this is kind of a big thing, the humor in the film is just so broad that even though these moments are trying to be funny, you're still laughing at it rather than with it. Many of these moments have now been isolated as context free gifs that show Emo/Bieber-haired Peter dancing and strutting about or James Franco enjoying a slice of pie and while I don't know what Raimi expected audiences to make of these moments, the internet being what it is I can imagine no other fate for them than this, but it's unfortunate that these things seem to be the sum of what is remembered about Spider-Man 3, a film which isn't great but really isn't the franchise destroying debacle that it's reputation suggests either.
Posted by Norma Desmond at 8:00 AM