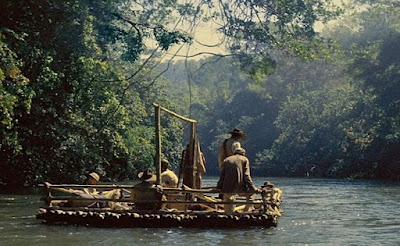 To obsess over something for years, to work so hard, to be so close and find that it is just beyond your reach - it would be enough to drive a person mad. The Lost City of Z, based on the non-fiction book of the same name by David Grann and centering on Percy Fawcett's search for a lost civilization in the Amazon jungle, does not treat Fawcett as though it thinks he was mad for continuously returning to the jungle, but makes a fairly compelling case for how he might have been driven mad by everything outside of the jungle. The film features touches that are reminiscent of such films as Apocalypse Now, Fitzcarraldo, and, especially, Aguirre: The Wrath of God, all films that know madness well, and reunites writer/director James Gray with cinematographer Darius Khondji after 2014's The Immigrant. Mesmerizing and often soulful, The Lost City of Z is a beautiful and bewitching story about one man's unconquerable desire to know the unknown.

Although in reality Fawcett made eight expeditions into the Amazon, including one disastrous solo attempt, the film limits him to three. The first occurs in 1906 when Fawcett (Charlie Hunnam) is commissioned by the Royal Geographical Society to map the area as an unbiased third party in an attempt to settle a border dispute between Brazil and Bolivia. It's a mission he's not particularly keen to take, primarily because he feels that he's already fallen behind his peers in his military career. Early in the film he and his wife, Nina (Sienne Miller), are getting ready to attend a party and he unhappily remarks that he'll be the only man of his rank without any medals and, indeed, once they get there he's mostly ignored by the important people in attendance, one of whom is dissuaded from talking to him when he's informed that Fawcett has made "an unfortunate choice in ancestors." Some past indiscretion or disgrace in the Fawcett family is alluded to again later in the film and Fawcett is driven, in part, by the desire to re-establish his family's name, and here the promise of some decoration for a job well-done is too much to pass up, even though it will mean a long separation from Nina, their son, Jack, and the second child that Nina has just learned they are to have.

For this map-making expedition, Fawcett is teamed up with Henry Costin (Robert Pattinson, almost unrecognizable in this character role), and as they make their way deeper into the jungle they purchase Tadjui (Pedro Coello), an enslaved indigenous man, to guide them and who tells Fawcett of a city of gold. When Fawcett later finds shards of ancient pottery in the jungle, as well as what appears to be the remains of a statue, he becomes convinced that Tadjui's claim is true and though the party cannot afford to explore any further, having staved off starvation only by fortuitously finding and shooting a wild boar, Fawcett tells Costin that one day they'll return to explore all that the lost city - which Fawcett will name "Z" - has to offer. Upon their return home, however, Fawcett's claims are ridiculed, with critics refusing to believe that "savages" could ever have created a complex civilization on par with their own. Given that such a notion should already have had the better part of 400 years to sink in, given Spain's conquest of the Maya, and the Ican and Aztec Empires, it's a little strange that they're so resistant to the idea but, then again, racism and common sense rarely cross paths. One of the strengths of the film is that rather than playing out as a colonialist fantasy about a white man entering into a space where people like him have never been before and mastering it, it chooses instead to use Fawcett to directly and openly criticize colonialism and its inherent racism. When Fawcett argues that the indigenous people of South America might have cultures worth exploring and are not "primitive" people incapable of governing themselves, he's shouted down by a room full of old white men and you can't help but wonder - what were they so afraid of?

One of the men not shouting Fawcett down is James Murray (Angus Macfadyen), a biologist who served under Ernest Shackleton in his 1908 Antarctic expedition, and who is completely enchanted by Fawcett's belief in the lost city of Z. He offers to join Fawcett's team on a second expedition to search for evidence of the lost civilization and so in 1911 Fawcett and Costin return to Brazil, but the mission turns into a catastrophe almost immediately. Physically unfit for the rigors of the jungle, and mentally less willing to believe in the humanity of the natives once he comes face-to-face with them, Murray becomes a burden too great to overcome and Fawcett finds himself snatched out of the jungle before he can realize his dream of locating Z. By the time they return to England, the world is on the brink of war, and it appears as though Fawcett will never be able to return to finish what he started. But when a now-grown Jack (Tom Holland) suggests in 1925 that they go together to find the city, Fawcett can't resist taking one last chance.

The mystery of what became of Fawcett and his son has been a topic of curiosity and speculation for nearly 100 years and though the film seems to provide an answer for it, in the end it ultimately opens the question up again before closing with a shot that is the spiritual sibling of the marvelous final shot of The Immigrant. Aside from being visually beautiful, the shot also emphasizes the one of the film's main points, which is that when Fawcett went into the jungle the first time he never truly returned, and now those he's left behind will forever be "in the jungle" too. If the story is a tragedy, the tragic figure is not really Fawcett, but Nina, who must abandon her own personal ambitions (with nary a shrug from her husband, who tells her that the roles of men and women have been fixed since the beginning of time) and find a way to manage the family with a husband who is absent more often than he is present. Although she's the story's designated "person left behind," both Gray and Miller work to make Nina more than just the beleaguered spouse being taken for granted, giving her spirit and intelligence and a desire to join Fawcett on his adventures rather than talk him out of taking them. In the film's telling of the story, she also provides support for Fawcett's theory of a lost city, discovering a Conquistador-era manuscript that seems to describe something like what Fawcett found.

With the exception of Jack, whose development as a character gets short shrift and whose evolution from resenting his father for his absences to admiring his father's work and wanting to be part of it gets lost in a time jump from 1916 to 1925, the film does right by its characters, touching on how the strict social hierarchy and rules of British society of the era have left them constrained. Nina can help Fawcett gather evidence to back up his claims, but when he goes to present his argument she's not allowed to watch from the floor because women aren't allowed in the hall and she's instead confined to the viewing balcony, and though she argues for it there's no real question of her joining Fawcett on any of his expeditions. Costin can be by Fawcett's side every step of the way, but he doesn't get to share in the glory because he's of a lower social station and while Fawcett can keep running back to the jungle without worrying about how Nina and their children will manage financially, Costin does not have such financial security. And then of course there's Fawcett himself, who at once experiences the benefits of his place within the class system but is also limited by the system's resistance to allowing people to rise to a higher station, and part of the reason why the jungle is so appealing to him is because of the freedom it allows him - when he's there it doesn't matter who his family is, or who will deign to be seen talking to him at a party; it's all down to him and what he's capable of achieving and surviving. The dream, then, is not just about finding something no one else believes exists, it's about going to a place where the artificial barriers of the class system did not exist and he could be free to rise as far as he was capable of taking himself. No wonder he couldn't resist.
Posted by Norma Desmond at 8:00 AM