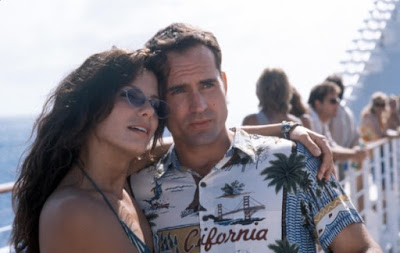 Lordy, I'd forgotten how dumb Speed 2: Cruise Control actually is. Even the title is dumb - I mean, Cruise Control? Really? Between this and Miss Congeniality 2 (whose full title, Armed and Fabulous, is just slightly more embarrassing than this one's), it's no wonder Sandra Bullock is leery of the prospect of making a sequel to The Heat. A sequel to the still resplendent action movie Speed, which was "Die Hard on a bus," Cruise Control very much wants to be "Die Hard on a boat" ("Die Hard on a plane" had already been taken by, um, Die Hard 2 and would be taken again by Air Force One about a month after Cruise Control's release) but, as it turns out, a cruise ship is not an ideal setting for an action movie. A grand romance interrupted by an even grander historical tragedy? Sure (to think, at the dawn of 1997 Titanic was supposed to be the year's most epic bomb). But a high intensity action piece? Not so much.

Because Keanu Reeves could not be talked into the sequel, the first short section of Speed 2 is devoted to explaining why Bullock's character, Annie, is now with a different LAPD SWAT team member (albeit one who bears a more than passing resemblance to her ex). Having broken up with Reeves' character, Jack, between movies, Annie is now with Alex (Jason Patric), who surprises her with a Caribbean cruise vacation, during which he intends to propose. They're joined on the cruise by an assortment of colorful supporting characters (including a child who will soon be in peril) and the film's villain Geiger (Willem Dafoe), who intends to sabotage the ship to get revenge on the tech company (for which he used to work) that supplied the ship's operating system and steal a bunch of diamonds that are on board, and who you know is the villain before he does or says a single thing because (to borrow a line from The Heat) he looks evil as shit.

Just how evil is Geiger? Well, as if uncertain that the casting of Dafoe, the choice to give the character a name like "Geiger," and having him do boilerplate bad guy stuff like hacking into computers, stealing diamonds, killing people, and holding people hostage, is going to be enough to drive home the fact that he's the bad guy, Cruise Control also chooses to give him copper poisoning and have his preferred method of treatment be leeches. He's not just an evil mastermind, the movie is saying, he's also a weirdo. He's also, unfortunately, a deeply boring weirdo for much of the movie, with Dafoe spending a good portion of his screen time on his own either sneaking around the ship in order to take control of it or remotely controlling portions of it from wherever he's hiding. It's only right at the very end that Dafoe, in what I can only assume was a means of sanity preservation once the realization of what he had signed on for started to sink in, chooses to lean in to the inherent ridiculousness of the story, going bug-eyed and punctuating sentences with maniacal laughter, that the character truly starts to feel as colorful as the film's premise and equal to the larger than life exit the character is going to be given.

From a storytelling perspective, Cruise Control does just about everything wrong. It completely sidelines Annie, the character who connects the two films and whom the audience is supposed to have some investment in, and if you're going to do that then why bother making this a straight sequel at all? You might as well just make it a rip off and try to capitalize on the premise rather than the name (I mean, worked for Speed). It also devotes most of the first hour to Annie's relationship with Alex, whose only personality trait is that he's not Jack but he's kind of like Jack, and then devotes the second hour to the story's interminable climax. That is not at all an exaggeration, incidentally. The story reaches the high point of the action and then just goes on, and on, and on to such a degree that any kind of tension or excitement is unsustainable. While the big finale is impressive enough in its action (the cruise ship crashes into a port town and a float plane blows up an oil tanker), you only get there after an endless length of time during which the film tries to make a cruise ship out in open water look like it's going fast. It doesn't work. With nothing but the sky and the water to measure its progress against, it just looks like it's lumbering along and even once it has a target (in the form of an oil tanker) to measure it's progress against, it still just doesn't really look like it's going fast, which makes the cutting back and forth between the concerned faces of the crew/passengers to the gap that's closing between the ships, seem more like parody than anything.

But ultimately there's nothing funny about Cruise Control, which doesn't even manage to be bad in the "so bad it's entertaining" way, and which was not just a box office bomb but an utter disaster. The production budget for Cruise Control was reported as $160 million, which would be a lot for a movie made now let alone in 1997, and when you factor in that $160 million in 1997 would be roughly $250 million today, that's a damn lot of money to sink into an action movie where you can only really see the money on screen during the last 10-15 minutes. Admittedly, that last 10-15 minutes is kind of spectacular - provided you can get past the fact that it relies on people continuously not realizing that a giant cruise liner is bearing down on them until it's practically right on top of them - but by that point it's all a little too late. Speed 2 is one of those epic follies that ends up being more of a trainwreck than an actual movie, leaving nothing but wreckage in its wake.

Should It Have Been a Blockbuster?: No
Posted by Norma Desmond at 8:00 AM