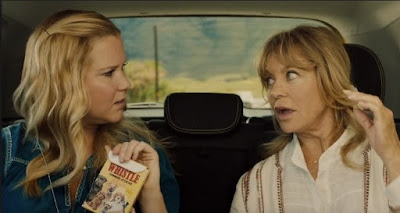 You may have heard that Snatched is terrible. By and large, the critics certainly seem to think so. I dunno. I thought it was funny. The rest of the people in the theater (which was full) seemed to enjoy it. I mean, it's not the kind of movie that's going to change your life and it's not going to end up on any year-end best lists, but not every movie has to perform at that level. As a piece of simple entertainment Snatched gets the job done pretty well, delivering a fast-paced story with plenty of laughs, and though Amy Schumer tends to be divisive, the presence of co-star Goldie Hawn should be enough to balance things out. It's a decent summer movie pick - nothing more, but nothing less either.

The premise of Snatched is pretty straight-forward: Emily (Schumer) loses her job and is dumped by her boyfriend, finding herself stuck with a non-refundable vacation to an all-inclusive in Ecuador. When all of her friends decline to join her, Emily talks her reluctant mother, Linda (Hawn), into joining her. A wedge quickly starts to develop between them once they arrive, as Linda would prefer to do nothing more than read a book and stay safe within the confines of the resort, while Emily is determined to go out and experience some local culture. When she meets a guy who offers to take her out to see some of the local attractions that are off the beaten path, Emily talks Linda into leaving the safety of the resort, resulting in them being kidnapped and held for ransom.

I pause here to note that this description, while accurate, will read as if Snatched is the sort of thematically objectionable "Americans in peril" story whose basic message is that you should never step outside of America's borders because the places in the world populated predominantly by brown and black people are inherently dangerous. It's true that Linda is a worrier who immediately objects to the idea of going to Ecuador because of the perceived danger (though, in fairness, she's also someone whose primary hobby seems to be double checking the multiple locks on her door, and who worries that if a crime takes place in Delaware, it means Emily could be in danger even though Emily lives in New York - point is, Linda thinks everywhere is dangerous), and that the bad guys are people of color; but it's also true that the film isn't really endorsing the actions and attitudes of its white protagonists and in fact opens with an expository crawl that acknowledges the terrible acts that will occur in the story and then adds that the kidnappers did bad stuff, too. It's a joke, but it's also working to get the audience into the mindset that the protagonists of the story are not necessarily heroes in the story.

While the film does not see Linda in a negative light - seeing her more as a lonely woman whose life has become increasingly small - almost all of its other white characters are framed so that their worst qualities are at the forefront. There's the guy that Emily meets and who lures her into the trap, but who also sells out his cohorts at the first sign of trouble. There's Emily's brother, Jeffrey (Ike Barinholtz), who is depicted as being overly pampered and privileged and as being supremely annoying even when he's trying to help (the film has a running subplot in which Jeffrey tries to wrangle the assistance of the American Embassy and his idiocy is met with escalating hostility by an official played by Bashir Salahuddin). There's an "adventurer" played by Christopher Meloni, who isn't actually capable of anything but who has the confidence of the white, American male that any space is a space he's entitled to occupy, and who assumes authority that he has no business taking before being exposed as a fraud.

Then there's Emily herself, who is the very picture of entitled narcissism (an element that Schumer leans into and plays up without vanity). She's the kind of person who lives performatively, selfie-ing her way through life, and who professes to want to experience the "real" place that she's visiting but doesn't mean that she wants to see poverty or social problems, but just that she wants to do some cool, mildly exotic things that will look good on her Instagram and make her look like she's more daring than the average tourist while allowing her to remain oblivious to the suffering of the locals who don't benefit from the tourism industry. One of the kidnappers even calls her out on the fact that she's a person who takes without contributing anything in return, and the violence of the film is chiefly committed by Emily, who ends up amassing an accidental but impressive body count. Between her and Meloni's character long stretches of Snatched play out as a story of Americans running roughshod over a foreign country and leaving a big mess in their wake.

This being a movie, Emily is redeemed before the end (assuming one considers helping some local villagers gather water and learning to appreciate her mom as enough to "redeem" her), but it's still pretty clear that she (and the culture that she symbolically represents) is the target of the film and what it sees as the real problem, though it should be said that even though the film works to redeem her, it also lets her end the film on a note that suggests that she hasn't changed much in terms of how she engages as a tourist with the world around her, opting for a simple and easy ending that wants to leave things as uncomplicated as possible. Ultimately Snatched is a very low stakes, low ambition, kind of film. It aims to deliver some laughs (and for me, at least, it largely succeeded in that respect) and it's put together just well enough to get it from Point A to Point B. It's not destined to be a classic, but it makes for decent summer fun.
Posted by Norma Desmond at 8:00 AM