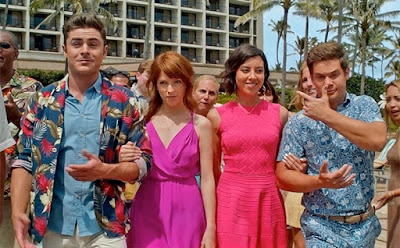 If Mike and Dave Need Wedding Dates had come out 10 years before it did, it probably would have been at least a modest hit. It would have been criticized for being Wedding Crashers-lite, but it would probably still have been able to cash in on the $200 million-plus domestic box office success of that film in order to crack the $100 million benchmark itself. So tied is Mike and Dave to the idea of the Vince Vaughn-Owen Wilson smash that not only is Wedding Crashers referenced by name in it, but the two films even had similar release dates (Wedding Crashers was released July 15, 2005 while Mike and Dave was released July 8, 2016). But, alas, Mike and Dave arrived way too late to the party and managed to bring home only a fraction of the box office of the earlier film, even though it had its opening weekend basically to itself (unless one thinks that there's much cross-over between the intended audiences for a raunchy R-rated comedy and an animated family film like The Secret Life of Pets). Of course, Mike and Dave may have helped itself by actually being good, but that's another issue.

Based on "a true story," by which it means that it's based on the true premise that two brothers named Mike and Dave posted an ad on Craigslist to try to find dates to a wedding and then managed to extend their viral fame into a book, Mike and Dave stars Adam DeVine and Zac Efron as the eponymous characters, two guys who are the life of every party they attend, but whose antics tend to escalate from good fun to good fun until someone gets hurt. As a result their parents (Stephen Root and Stephanie Faracy) tell them that the only way they'll be allowed to attend the wedding of their sister, Jeanie (Sugar Lyn Beard), is if they find "nice girls" to bring with them so that they don't go wild at the reception. When word gets out that Mike and Dave are looking for dates to the Hawaiian wedding, Tatiana (Aubrey Plaza) and Alice (Anna Kendrick) contrive a way to meet them and pose as the nice girls that they're looking for, when in actuality they're exactly the kind of hedonists Mike and Dave need to avoid if they want to stay out of trouble.

The first obstacle to Mike and Dave's success is that it's not really very funny and even when it is, it's funny in a way that is completely unmemorable. I know that I laughed a few times during the course of the movie, but for the life of me I can't remember a single funny line or incident. For the most part the humor in Mike and Dave is built around what I would call "half-jokes," meaning that there's a premise for a joke without there being any actual pay off for a joke (for example, a running subplot about a cousin with whom Mike has a rivalry where the entirety of the joke seems to be that she's a lesbian. Wait, pardon me, that she's a sexually predatory lesbian), and a weird fixation on tearing down Jeanie. While Mike and Dave profess to love their sister, so much so that they're generously willing to not act like jackasses for one day for the sake of her wedding (but, lo, the jackassery finds them whether they're looking for it or not), the film that bears their name delights in little more than humiliating her every chance it gets (the actual Mike and Dave were looking for dates to their cousin's wedding, so presumably there isn't a real-life sister who might be holding a grudge over this). Over the course of the film she gets her face rearranged by the wheel of an ATV, gets a "happy ending" massage she didn't ask for (one might be inclined to call that assault, but here the joke is how into it she gets), and ends up naked so that the film can laugh at how much pubic hair she has. The genuine disdain that the film seems to have for the character, who appears to be a basically nice person whose only fault is that she wants her two dumb-dumb brothers to dial it down from 10 to about 5 so that her wedding reception will be remembered as her wedding reception rather than as that time that her brothers got drunk and burned down a small part of Hawaii with firecrackers, is puzzling.

The second obstacle that Mike and Dave needed to overcome is that summer just doesn't seem like a season that's kind to comedies lately. If you remove action comedy hybrids like 22 Jump Street, Spy, Ghostbusters, and Central Intelligence from the conversation for the fact that they offer big time summer spectacle in the way of things like explosions and shoot outs, and animated comedies for the fact that those have a larger built-in audience as a result of being targeted towards families, then there have been few pure comedies to cross the $100 threshold in any of the last five summers. 2016, 2014, and 2012 only saw one apiece with Bad Moms, Neighbors, and Ted, respectively; 2015 had two with Pitch Perfect 2 and Trainwreck; and 2013 had a high of three with We're the Millers, Grownups 2, and The Hangover Part III. That's 8 movies, 3 of which were sequels, and even if you consider this a spiritual sequel to Wedding Crashers (and I don't see why you wouldn't, since it wants so desperately to be that), the last couple of years have seen plenty of decade-late sequels that have failed to capture lightning in a bottle a second time. A movie this flimsy was not going to be the exception to that rule.

Mike and Dave's failure to launch is ultimately not the fault of its main cast, who are all pretty game. Plaza, in particular, approaches her role like she came to play and will go to any lengths to wring some laughs out of the script (she did something similar in Dirty Grandpa, a terrible movie which also stars Efron), and DeVine similarly goes all in with Mike, while Efron and Kendrick play characters who are a little closer to earth and whose tentative romance ends up forming the backbone of the film's second and third acts. Of course, that romance would be more meaningful if Dave weren't so flat as a character (Alice, who suffers from PTSD related to her own wedding and has the good fortune to be played by Kendrick, is a bit more dimensional). His one quality is that he's a screw up, but even that isn't really true as the film takes pains to single him out as merely having been "lumped in" with Mike and only incidentally part of the problem. As a character, he's just a wisp, but that's what's wrong with the film as a whole: it's an idea waiting for a screenplay to actually fill it out into a story.