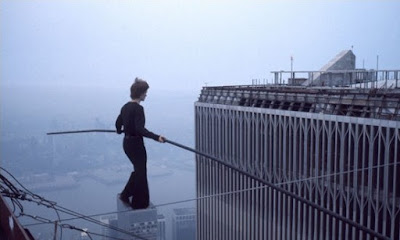 Philippe Petit’s story has all the ingredients for a hit movie. It’s got a story so audacious that it has to be true because otherwise you’d never believe it. It’s got a charismatic protagonist that you can’t help but feel charmed by. It has some visuals that are incredible, not because of their technical aspects necessarily, but simply because of what they capture. And it has weight, which it derives both from the inspirational aspects of the story itself and from the impact of historical events. In short, it’s a story that begs to be made into a movie – it’s just unfortunate for Robert Zemeckis’ 2015 bomb The Walk that such a movie already existed. That movie is Man on Wire, a bold and delightful documentary from James Marsh which remains utterly enthralling and exhilarating almost a decade later.

It happened in 1974. French high-wire artist Phillippe Petit walked through the air between the two towers of the World Trade Center, separated from certain death only by the width of the wire and his skill and confidence in himself. His presence between the towers was a surprise to everyone, him and three other men having found a way to sneak into the buildings (two in one, two in the other) with all of their equipment and set it up during the course of the night. The specifics of how it all came together is a case of each step being crazier than the last, with the most unbelievable part being that the team managed to get the wire from one tower to the other by shooting it across the gap with a bow and arrow. A bow and arrow. And the mere fact that it was done with a bow and arrow isn’t even the best part! The best part is when Petit’s friend, Jean-Louis Blondeau, the man who shot the arrow, describes seeing Petit give the signal from the edge of the other tower and then instinctively aiming the arrow at him when he shot it. There’s so much about this that could have gone wrong but didn’t, including the fact that at one point a helicopter was overhead while Petit was out on the wire and could have knocked him off, that in the end it seems like nothing more than destiny.

Marsh tells Petit’s story in perhaps the only way it can be done that would truly do it justice: like a heist movie. It’s a tale about a man who has a seemingly impossible scheme he wants to pull off, puts together a team to help figure out the logistics, goes through various phases of planning, which includes having to negotiate several things going wrong, and the finally does what he’s come to do, pulling off the “artistic crime of the century.” To tell the story, Marsh builds Man on Wire on interviews with the players, archival footage, and reconstructions with actors that give the film a playful feeling that brings the caper to life.

But Man on Wire is a lively film apart from those reconstructions, thanks in large part to Petit himself, whose joie de vivre and magnetism make it easy to understand how he was able not just to talk people into helping him accomplish his big, crazy dream, but to actually believe that he could be capable of pulling it off. When he describes his feelings upon learning about the construction of the World Trade Center and deciding that he would walk a wire between the two towers, you get the sense even now of how profound a desire that was for him, how impossible it would have been for him to not at least try to do it. This is a man who has spent his whole life giving in to the compulsion to go higher and higher, to walk the line between safety and injury or death. In his own words, "Life should be lived on the edge of life. You have to exercise rebellion: to refuse to tape yourself to rules, to refuse your own success, to refuse to repeat yourself, to see every day, every year, every idea as a true challenge - and then you are going to live your life on a tightrope." Of course he had to do this - no one else possibly could.

When all was said and done, Petit managed to stay on that wire for about 45 minutes, crossing back and forth eight times before finally being coaxed off by the police, who promptly arrested him. The consequences of that were ultimately minimal, as people were more awestruck than angry about his actions (in archive footage one of the arresting officers describes the event and seems more moved than anything, understanding that he’s witnessed something that no one else will ever see) and he even received a lifetime pass to the observation deck of the towers afterwards. There was magic in the air when Petit went to work and everyone seemed to be caught up in it, and that’s the feeling that the film captures so well. The elephant in the room is, of course, the fate of the towers, which goes unmentioned in the film. That’s the right decision and in a way Man on Wire delivers one of the best possible tributes to what was lost by not acknowledging it at all, shifting the focus from tragedy to the triumph, imagination, and wonder of what was created in the first place.
Posted by Norma Desmond at 8:00 AM