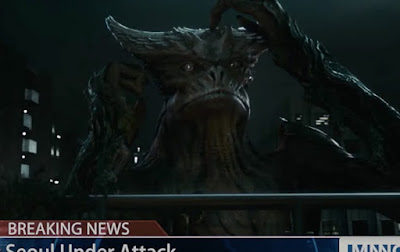 Nacho Vigalondo's Colossal is the kind of film that I want to praise for its ideas, but which falls just short enough of achieving what it's trying to do that I can't really recommend it. If Colossal was just what it appears to be - an oddity about a woman who realizes that her drunken antics are somehow resulting in a Kaiju appearing in Seoul, stomping through the city and leaving destruction in its wake - then it might have made for a fine absurdist comedy. If its ambitions had been limited to being about a woman confronting and finding a way to conquer her demons, it would probably also have been fine - as the woman in question, Anne Hathaway delivers a performance that is strong and nuanced enough to have pulled that off. But Colossal has greater ambitions than that, and while I admire it for what it's trying to address and what I think it's trying to do, I think it goes about it a little wrong.

Hathaway is Gloria, a writer whose hard partying lifestyle has left her unemployed and has resulted in her boyfriend, Tim (Dan Stevens), kicking her out of their apartment. Needing to regroup, Gloria heads back to her hometown in order to crash in her childhood home, which is empty as a result of her parents having moved with plans to rent the house out. Gloria quickly reconnects with Oscar (Jason Sudeikis), a childhood friend who now owns a bar and helps her out by giving her some furniture and letting her take a few shifts to make some money. But hanging out with Oscar and his friends, Garth (Tim Blake Nelson) and Joel (Austin Stowell), only stokes the destructive behavior that has stripped Gloria of everything she's worked for, leaving her spiraling. To make matters worse, the world has become rapt by stories of a Kaiju appearing regularly in Seoul and creating a state of emergency there, and Gloria realizes that she is somehow in control of it, the destruction she's doing to her life physically manifesting itself in the destruction of the city.

At first Colossal seems pretty straight forward; the set-up (aside from the monster on the other side of the world part, of course) is familiar from countless mild comedies about people who have fallen from grace in the big city and find themselves returning to their hometown to start over. It's no surprise when Gloria pretty much immediately reconnects with Oscar, as the blueprint for those kinds of stories dictates that the character who returns will find love with the salt of the earth love interest from their past, but this is where Colossal starts to zig where other films lean into the zag. Instead of having them fall in love, Vigalondo has Gloria sort of pursue Joel and reveals Oscar to be a toxic "nice guy" who believes that he's entitled to Gloria's affections (I mean, after all, he did give her all that stuff, no strings attached except for the massive emotional strings attached) and becomes increasingly abusive and manipulative in his quest to bring Gloria under his control - a problem which is magnified when it's discovered that just as Gloria can step into a local park at a certain time of day and make a Kaiju appear in Seoul, Oscar can step into the park and make a giant robot appear.

This narrative turn is, at first, kind of thrilling. It's exceedingly rare for a film to confront this kind of every day microaggression based misogyny, with entitlement finally escalating into violence, and in certain respects Colossal deals with this theme quite well. The tipping point scene is basically a dramatization of Margaret Atwood's statement that "Men are afraid women will laugh at them; women are afraid that men will kill them": a drunken Oscar goes to the park in order to make the robot appear in Seoul and is taunting the city by pretending that he might trample on it. Gloria tries to reason with him to make him stop and then enters the park herself, making the Kaiju appear in Seoul. When she can't convince Oscar to leave the park, she slaps him, and what people watching the live feed around the world see is the Kaiju slapping the robot, which delights them. They cheer for the Kaiju and laugh at the robot and Oscar's anger at being the butt of the joke and at Gloria preferring Joel to him becomes all consuming. The next time Oscar and Gloria find themselves in the park, she tries to physically push him out of the space and he beats her up, making sure that she knows that whatever power she had the first time was only power that he let her have and then proceeding to control her both with the threat of violence to her personally and with the threat that every time she fails to do what he wants, he's going to go to the park to make the robot appear in Seoul - which means that the deaths in Seoul that result will be her fault.

At times all of this makes Colossal darkly fascinating to watch, as once Vigalondo sends Gloria and Oscar down this path, he does absolutely nothing to soften the blows or pull any punches, and Hathaway and Sudeikis fully embrace the turn in order to play out this horrifying dynamic. However, while I think that the idea of what Vigalondo is trying to do is interesting, Colossal is a bit lacking when it comes to the execution. For one thing, I find it... bizarre that a film that takes such pains to try to explore a woman's perspective simultaneously ignores the existence of women. Aside from the lead played by Hathaway, there are no female characters in this movie. I don't mean that there are literally no women in the movie - several appear in seconds-long snippets as newscasters reporting on the situation in Seoul - but the only women other than Hathaway who appear as actual "characters" (and I'm using that term loosely) are a mother and daughter who appear in the prologue, a party friend of Gloria's who appears in the beginning, and a bartender in Seoul who appears at the end. All of these women appear in just one scene and only the bartender gets more than one line of dialogue and only the friend gets a name. Meanwhile there are four major male characters - Oscar, Tim, Garth, and Joel - who get a modicum of backstory and a little bit of fleshing out. Weird, right?

Moreover the ending, while satisfying on a very base level, is a bit problematic. For one thing it requires Gloria to embrace her monster, which has literally done a ton of damage in Seoul and which has metaphorically done a ton of damage to Gloria's life (though, to be fair, at about the time that the film reveals that Oscar possesses the same power, it sort of stops pursuing the idea that Gloria's drinking = a monster that destroys everything in its path). For another, the notion that the only way to combat an abusive person is to figure out a way to successfully be more violent towards them than they can be towards you, doesn't sit particularly well with me. That said, these thorny thematic issues might not have mattered as much if the film had been able to maintain steam all the way to the end. Colossal builds well in the first act, but once it gets to the point of establishing the personal stakes of Gloria and Oscar's battle in the second act it starts spinning its wheels and the energy of the piece fizzles out before the story actually reaches the end. There's enough going on in Colossal to make it an interesting film to watch, but it doesn't quite come together enough to be successful as a film.
Posted by Norma Desmond at 8:00 AM