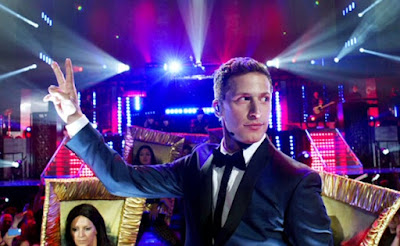 It's a very fine line between stupid and clever. If there's one thing that should comfort the makers of Popstar: Never Stop Never Stopping, it's this: This Is Spinal Tap, perhaps the greatest movie about rock and roll ever made and one of the most celebrated movie comedies of all time, wasn't a theatrical hit either. If you look at the box office record for 1984, Spinal Tap didn't even crack the top 100 for the year and unlike now, when something like 50 movies debut every month, 1984 was a time when less than 200 films would come out in any given year. It was homevideo that made Spinal Tap a hit, its endless quotability helping to turn it into a cult classic. A similar fate may end up befalling Popstar, which is like Spinal Tap if you trade rock and roll for pop music, and which Universal had every reason to expect would be at least a minor hit given the viral video popularity of The Lonely Island. Instead Popstar went the way of TLI's previous effort Hot Rod, which crashed and burned in 2007. It's hard to say what kept audiences away from this actually very funny and incredibly on point satire, but a film this good will hopefully have the last laugh, even if it comes a bit late.

Unfolding in the form of a documentary (naturally), Popstar centers on Conner (Andy Samberg), popularly known as Conner4Real, a solo star in the vein of Justin Bieber who was once a member of the rap/pop trio The Style Boyz alongside his childhood friends Lawrence (Akiva Schaffer) and Owen (Jorma Taccone). While Owen has stuck with him to perform as his DJ - which involves nothing more than hitting a button on an iPod - Lawrence has entered into bitter self-exile, giving up show business in order to become a farmer who spends his days brooding on the ways that Conner screwed him out of credit and a career. Conner, meanwhile, is determined to think as little about the past as possible. With his highly anticipated second album on the verge of being released, Conner's focus is entirely on his future and on living up to his own hype, which makes it all the more devastating when everything starts to go wrong: the album flops, he ends up being usurped on his own tour, his celebrity relationship falls apart, and he finally pushes away his last real friend.

The success of Popstar as a comedy has a lot to do with its specificity. This is true in terms of how it characterizes Conner as a very specific type of celebrity - insulated from criticism by an entourage paid to reinforce his inflated self-esteem, performing every moment of his life via social media, engaged in a relationship with another celebrity for the mutually beneficial purpose of garnering publicity for each other - but also in terms of how it incorporates and recontextualizes actual bits of pop culture ephemera. U2's "Songs of Innocence" release misstep reappears here as Conner's new album being downloaded into appliances around the nation, resulting in power outages and people tossing their fridges and microwaves because they don't want them to play music they didn't ask for every time they use them. There are nods to Bieber's Calvin Klein ads and his boorish behavior while visiting Anne Frank house, and the film has some fun at the expense of Katy Perry and her tour documentary, specifically a scene where she builds a performance around a series of on-stage costume changes which in Popstar results in Conner ending up naked on stage for the whole world to see. The best, arguably, is the film's takedown of Macklemore's "Same Love," which figures here as a song that is ostensibly a declaration of his desire to be an ally to the gay community but which becomes tainted by his overwhelming need to broadcast the fact that he himself isn't gay, adding the words "not gay" to the end of pretty much every line just to make super sure that no one could be confused about that.

Additionally the film, which was written by Schaffer, Taccone, and Samberg, succeeds through a combination of broad, dumb humor and slyer more lowkey humor. There's an extended sequence that takes place behind a black screen, the "documentary" camera having been turned off but the audio remaining on, during which Conner and his manager (Tim Meadows) are attacked by bees, the battle escalating to the point where a flame thrower is employed and ending with the exchange, "Camera guy, tell me you got that!" "You told us to stop filming." It's an exquisite little piece of absurdity, as is a bit towards the end of the film that plays on the cinematic convention of someone being faced with a big question and staring off into the distance (to paraphrase Walk Hard, another music comedy that didn't get its due in theaters, he has to think about his entire life before he plays) by having a minor character comment on every second that Conner spends saying nothing while he thinks. Subtler is some of the dialogue, tossed off nonchalantly, that results in some of the film's best lines. Playing Conner's publicist, Sarah Silverman gets two of those lines, the first describing the strategy behind marketing the album as, "We'd like to get to the point where Connor is everywhere, like oxygen or gravity or clinical depression;" the second coming later when she notes that, "Conner's music may not be what I listen to in my free time, but it seems to make so many people money." It's all in the delivery.

Popstar succeeds because it finds that sweet spot between the absurd and the real. It roots itself in the ridiculous and often fleeting nature of celebrity and exaggerates it juuuust enough, making Conner a recognizably human character whose bravdo is in large part a means of overcompensating for the fact that so much of his success is actually the result of taking credit for Lawrence's work, and for the fact that despite his assertion that he's been "dope" since he was a baby, the relationships that he should be able to take for granted with his parents (if Conner has a father, he's an entirely absent one; his mother is played briefly but wonderfully by Joan Cusack as a woman who has leveraged her son's fame in order to live the non-stop, hard partying life for herself) are instead entirely contingent on his success. Yet while the film makes efforts to make Conner seem fleshed out, and has a certain degree of goofy affection for him, it's still more than willing to skewer him for all the ridiculous excesses of his celebrity lifestyle and for the general cluelessness and inflated and unearned sense of self-importance he displays and which is the result of him having spent the majority of his life being told how great he is. Popstar enjoys taking him down a few pegs, but builds him up well enough as a character that you ultimately want to see him succeed after he's been humbled enough to recognize the irony of his song, "I'm So Humble."


Should It Have Been a Blockbuster?: A hearty yes
Posted by Norma Desmond at 8:00 AM