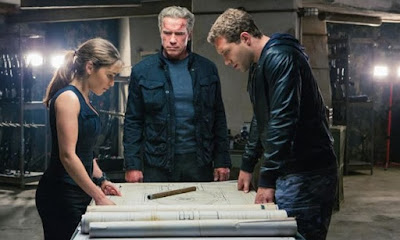 You know, I almost get the thought process behind this one. Before Terminator: Genisys, we lived in a world where there were two good Terminator movies and two bad Terminator movies. While the bad ones are bad all on their own, they also seem ever so slightly worse than they are when inevitably compared to the good ones. So what Genisys does is it borrows some elements from the first two, shits all over them, adds in some nonsense, and then calls it a movie. As a strategy for launching a rebooted trilogy, it's so crazy it's almost brilliant, because it erases those first two movies (within the "universe" of the series, I mean, as obviously the first two Terminators continue to exist in the real world), burning the series down in order to start over from scratch - and with a significantly lowered bar in terms of expectations. If a follow up film is made despite the angry yawn that met the release of Genisys, the bar is now so low that it would have to actively try to be the worst Terminator in order to actually achieve that distinction.

So here's the situation: we open in the future, during the dying moments of the war between humans and Skynet when John Connor (Jason Clarke, faring no better than any other actor has when saddled with the role of John Connor) makes the fateful and crucial decision to send Kyle Reese (Jai Courtney) back to the year 1984 so that he can protect Sarah Connor (Emilia Clarke) from the T-800 (Arnold Schwartzenegger) that has been sent back in time by Skynet to kill her and prevent John Connor from ever being born. As he's in the process of being sent back, Kyle sees John being attacked, an event which apparently completely alters the timeline. Now, when Kyle goes back, Sarah isn't really in need of protection, having been raised with the awareness that machines will one day take over and that she is a key to humanity's survival as the mother of the future's resistance leader. How was she raised that way? Well, a T-1000 was sent back to kill her during her childhood and she was saved, and subsequently raised, by a T-800 whom she calls "Pops." Who sent that T-800 back? Um... hey, look, Sarah just saved Kyle from being killed by a T-1000 (Lee Byung-hun) and lets him in on her plan to travel forward in time to 1997 to destroy Skynet before it becomes self-aware. But Kyle convinces her to travel forward to 2017 instead in order to stop Skynet from launching Genisys. And Pops keeps reminding Sarah of her destiny to have sex with Kyle and conceive John. And John is also there in 2017, but now he's a robot. And this movie is bullshit.

Four movies in, it was already pretty pointless to argue over the series' overall story and whether it all hangs together or if subsequent films screw up what was already established in the previous entries. In all honesty, that probably became pointless after Judgment Day, but that movie was good so you could overlook it. Genisys is not good, so every plot hole and every turn that makes the overall narrative more convoluted just stands out in more glaring fashion than ever. Yet, for me, what happens in this film makes it difficult to get past the problem of John Connor. The whole point of John sending Kyle back to 1984 is and always has been so that he can both save Sarah and create John himself (and, yes, this creates its own problematic equation since John first had to exist in order to send Kyle back in time, but John only exists because Kyle goes back in time, but, again, Terminator was good, so you gave that a pass). So if Sarah and Kyle are together in 1984, but they don't have sex and they don't stay in 1984 then... how does John Connor exist at all? Yes, when all three meet in 2017 he offers the throwaway theory that the three of them exist outside of time now, but if there aren't any rules whatsoever, then how can there be any dramatic tension? If John, Sarah, and Kyle exist outside of time, and if they can exist without having been born in the first place (as John apparently can), then can they even be killed at all? And if they can't be killed, if the threat of death isn't informing their actions, then doesn't that effectively kill the story?

The frustrating thing is, there is actually the germ of an intriguing idea buried inside Genisys, namely that John Connor was once the destined savior of humanity, but is now destined to destroy it. However, the film not only gets there by twisting everything beyond recognition and throwing away anything resembling narrative coherence, it doesn't even seem to actually recognize this element at all, given that in the end Sarah and Kyle are together and, presumably, on the verge of doing what Pops has been encouraging them to do since 1984. At this point, in this timeline, they ought to go their separate ways and not conceive John Connor, no? Or maybe it doesn't matter since they exist "outside of time." Which means that the seemingly endless cycle of terminators going back in time to try to kill Sarah and John at various times in their lives doesn't matter, nor does it really matter how many times the day that Skynet finally takes over gets pushed back. Genisys had the opportunity to change the stakes of the narrative, but instead it just renders the stakes nonexistent.

But, none of that would really matter if the film was any good. Enjoyment of a movie goes a long way and allows you to forgive a lot of plot holes and any number of missteps, but Genisys isn't an enjoyable movie to watch. It turns Sarah Connor into a combination of the Sarah and John characters from Judgment Day, by which I mean that she is at once the badass (at least, the film tells us that she's a badass, but Clarke is certainly no Linda Hamilton and doesn't sell the idea quite as easily) with a plan and she's the kid (she's not technically a "kid," but it's hard to think of her as being otherwise when she's calling the T-800 "Pops") with the robot friend. It turns the T-800 into a cuddly pal, even more so than Judgment Day did, and makes him less a figure of terror (though he does get some good kills in) than a figure designed to bring a little bit of comic relief to the proceedings (not that Genisys has a ton of choice in that, seeing as Schwartzenegger has the charisma to pull that off, making him unique among the film's major players). It renders Kyle Reese basically useless since he doesn't help conceive John, doesn't need to be there to save Sarah, and his one real contribution (the idea to go to 2017) is actually kind of nonsensical, because why travel forward to the moment right before Genisys goes up, when you could stay where you are and destroy Cyberdyne before it gets so big and so powerful that it's almost impossible to destroy? Going as far into the future as possible is actually pretty dumb, seeing as it gives you less time to work with in terms of stopping Skynet. So thanks for nothing Kyle. Better luck next time? Despite everything - being bad, being critically lambasted, being a rather big commercial failure in North America, and seemingly actively working to alienate fans of the original movies - there are apparently going to be more Terminator movies. You never quite destroy Skynet, you see; you just push the countdown back a few years.


Should It Have Been a Blockbuster?: Well, when you're talking about the fifth movie in a series where ever entry except the first one has cracked $100 million, you expect it to at least reach that threshold, but given that no Terminator movie since Judgment Day has actually made enough to match its production budget, I don't know that you can expect it to be a "blockbuster" in the "made a profit" sense. I'm sure that in an alternate timeline, this movie is huge and beloved.
Posted by Norma Desmond at 8:00 AM

Exactly. This movie gave me a headache with all the plot holes and paradoxes. Sigh.