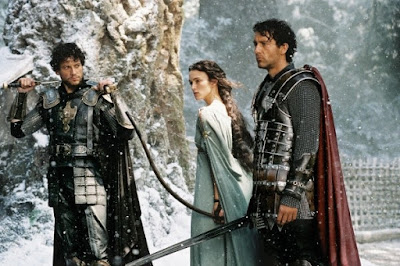 It probably says it all that I remember having seen King Arthur when it was in theaters, but virtually nothing about it stuck with me. All I remembered about it is that it presented itself as a "historically accurate" version of the King Arthur story, that it featured a battle scene on ice, and that at one point Keira Knightley is made up with warpaint and what looks like fetish gear. Rewatching the film in 2016, everything else struck me as completely new, with no sense of deja vu at all. So what we have here is a completely forgettable take on one of the most widely known legends ever passed down from generation to generation, a tale that brims with magic and has a stature that's larger than life reduced here to something unremarkable and not particularly distinguishable from any other historical epic. Sounds like $120 million well spent.

In this version of the story, King Arthur is reimagined as Artorius Castus (Clive Owen), a Roman officer, and the Knights of the Round Table are the auxiliary cavalry over which he has command. Their task is to guard Hadrian's Wall from attack by the native Britons who wish to end the Roman occupation and are led by Merlin (Stephen Dillane), and all of the knights were plucked from their families and forced into service as children with the promise that their duties would be discharged after 15 years. As the film opens, that 15 year period of service is coming to an end and the knights who remain - Lancelot (Ioan Gruffudd), Bors (Ray Winstone), Tristan (Mads Mikkelsen), Gawain (Joel Edgerton), Galahad (Hugh Dancy), and Dragonet (Ray Stevenson) - anticipate being allowed to return to their homelands, but they are surprised and disappointed when Bishop Germanus (Ivano Marescotti) arrives not with the papers they need to prove they are free men discharged of their service to Rome, but with a final task for them to perform: to retrieve and escort back to the Wall an important Roman family who are in danger of being captured by an army of Saxons led by Cerdic (Stellan Skarsgard) and his son Cynric (Til Schweiger). In the process of accomplishing this, Arthur and his knights end up with an entire village under their protection, including Guinevere (Keira Knightley), who had been imprisoned by the Romans and is also Merlin's daughter. With the Saxons close at their heels, Arthur leads the way back to Hadrian's Wall and prepares for battle.

The motivation for making a film centering on King Arthur is pretty easy to understand. It's a story with built-in name recognition and, even though there have been multiple film versions of the Arthurian legends already, there are so many different parts of the legend to pick from in terms of focus that the film wouldn't necessarily be derivative. That's why it doesn't really make a ton of sense to make a movie based on King Arthur that removes just about everything familiar from the legends, from shifting the setting to an earlier period, to excising the elements of magic, to downplaying what is arguably the most famous part of the Arthur legend: the love triangle of Arthur, Guinevere, and Lancelot. While the desire to do something different is understandable, and there's always some mileage to be gained from presenting something as the "true" or untold story, in this particular case the posturing as an "historically accurate" portrayal gets pretty silly pretty fast given that it features Merlin at all, depicts Guinevere as a Celtic warrior, and plays fast and loose with the timeline in terms of the Roman withdrawal from Britain and the arrival of the Saxons under Cerdic and Cynric. Embracing either the "historical" or the legendary would be fine, but the way that King Arthur presents itself as doing one while incorporating (seemingly at random) elements of the other makes it seem like a really half-assed affair.

Beyond the uneasy mixture of the "real" (or theories about what might have been real), bits of the legend, and bits of things the filmmakers have decided to add to make it more appealing to a contemporary audience (I can only assume that that's what's going on with the film's portrayal of Guinevere), King Arthur is a tough sell because it's so self-serious. In taking the position that it's an historically based film, it also opts to be as dour and colorless as possible, with even Skarsgard's villain played at the level of tired and sleepy rather than at the scenery-chewing level that a line like "Ah, finally, a man worth killing," seems to demand. Even the film's attempts at lightness (and I use that term very, very loosely) fall totally flat, with the closest the screenplay comes to a joke being when Arthur's forces face off with the Saxons across a sheet of ice and Lancelot says to Guinevere, "You look frightened. There's a large number of lonely men out there," and she turns to him and replies, "Don't worry, I won't let them rape you." It's a moment that speaks not just to how tone deaf the screenplay is, but how ill-conceived is the decision to contemporize the character of Guinevere by trying to sell her as a sort of proto-feminist figure who holds her own with men in both conversation and battle. It just doesn't work, and I'm not sure it would work even if the role weren't severely miscast with the waifish Knightley. I mean, a one-on-one combat scene between Keira Knightley and Til Schweiger? You can't tell me that that wouldn't be over and done with in all of half a minute.

The casting of Knightley is a problem - though, given that she was just coming off of Pirates of the Caribbean, she was probably the biggest star in the film at the time of its release - as is the casting of Gruffudd as Lancelot, whose lack of charisma in the role reduces the character to being just "one of the guys" among the other knights - though the fact that the film greatly downplays the love triangle also contributes to the character sort of blending in with the rest of the knights, which is a blessing since Knightley and Gruffudd have absolutely no chemistry with each other. Owen and Knightley don't exactly have a lot of chemistry either, but the story is ultimately less invested in the relationship between their characters than in the relationship between Arthur and the Roman ideals he holds so dear anyway. As a result, Owen actually comes out of the film relatively unscathed because the screenplay actually gives him something to work with as he guides the character from being someone who holds firm to his ideas of what Rome and Romans are to someone who discovers that the ideals he's been upholding have been nothing but illusions. There's nothing about the portrayal that particularly screams "King Arthur," mind you, but that's just the kind of movie it is. It's the story you know, drained of all the things you know about it and all the things that made it appealing in the first place.

Should It Have Been a Blockbuster?: Eh, no.
Posted by Norma Desmond at 8:00 AM