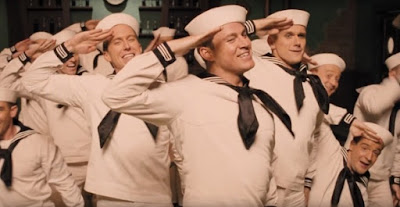 Good news and bad news. The good news is that Hail, Caesar!, which finds the Coen brothers in a loosey goosey kind of mood, is a treat for movie nerds, it's such an affectionately crafted paean to 1950s Hollywood and the moment when the old Hollywood started to fall away and make room for the new. The bad news is that, once you see it, you'll find yourself longing for full length versions of the Coen brothers' take on the Esther Williams swim and song movie, the singing cowboy B-movie, the swords and sandals biblical epic, and the Gene Kelly song and dance movie. Hail, Caesar is more a series of fun vignettes than anything, but when it's this entertaining it hardly matters that the plot is all dangling threads held together by the vague notion that the protagonist is experiencing a dark night of the soul.

That protagonist is Eddie Mannix (Josh Brolin), the head of production at Capitol Pictures who is worn out from the long hours spent keeping the studio running not just by ensuring that all the movies in production keep rolling along as planned, but also by diffusing the scandals of the stars on his roster. Through the course of a very long day, Mannix will find himself trying to arrange a marriage for DeeAnna Moran (Scarlett Johansson), a synchronized swimmer/actress who is pregnant and pretty sure she knows who the father is, and then embracing a more creative solution after she balks at the idea of entering her third marriage; struggling to guide the transition of B-movie star Hobie Doyle (Alden Ehrenreich) into a sophisticated leading man, the star's guileless politeness and eagerness to please doing little to disguise how ill-equipped he is for the new job and seriously testing the patience of his tony new director Laurence Laurentz (Ralph Fiennes); and juggling the demands of dueling gossip columnists Thora and Thessaly Thacker (Tilda Swinton), one of whom is poised to resurrect a dormant rumor about a major star, this time with some corroboration from a source inside the studio.

Mannix's main concern, however, is the abduction of star Baird Whitlock (George Clooney), who has been drugged and kidnapped from the set of the studio's big budget epic. Mannix initially assumes that Baird is merely on a bender until a ransom note arrives from the kidnappers, who identify themselves as "The Future" and demand $100,000 in cash for Baird's release. Baird, meanwhile, comes to in a mansion in Malibu and seems blissfully unaware (at first) that he's been abducted, happily sitting down to converse with a room full of writers who spend the rest of the day filling his head with Communist theory. Easily swayed by what they have to say, Baird finds himself becoming a willing participant in their plot, while Mannix tries to keep the movie going in Baird's absence and tries to keep people from asking too many questions about it. Professionally Mannix is in crisis, and personally he's struggling to come to terms with himself, seeking answers and standing at a crossroads, hoping that someone else might take control of things for him, for once.

Hail, Caesar! unfolds with an almost impish delight, touring through as many types of '50s specific movies as it can, including pausing for a Gene Kelly-esque musical sequence with Channing Tatum playing the Gene Kelly role. Even when you factor in the connection that Tatum's character ends up having to the main plot, this scene is a frivolous diversion, but it is also the single best scene in the film and I very much look forward to seeing Tatum perform "No Dames" at next year's Oscars when it's nominated for Best Original Song (first prediction of the year!). Everything is so affectionately rendered that the film is easy to engage with, part of the fun being picking out the inspirations for the various characters and the bits and pieces of Hollywood lore and gossip that have been woven into the story, part of the fun being just watching the actors, who all seem to be enjoying themselves immensely. Hail, Caesar! is a film that can easily be enjoyed just on a surface level as a lighthearted piece of fluff from a writer/director duo that have made a career out of swinging back and forth between very dark dramas and very funny comedies.

Yet, if you were inclined, you could scratch the surface of Hail, Caesar! and find something a little more melancholy and dark. There's a feeling, when you get to the end, that none of what just happened really mattered - subplots are treated with such little consequence that most get resolved off screen and at times even the overall plot seems to exist solely to create some kind of connection between all the disparate pieces of machinery - but you could also make the argument that that is the point. None of it really matters anymore. The Hollywood depicted in Hail, Caesar is on the verge of disappearing, with the power of the big studios about to start draining away as a result of several factors, including the audience being lured away by television, the courts having forced a break between studios and theaters, and the star system on which old Hollywood was built about the collapse. Mannix searches for meaning in what he does and because he doesn't know what we do, there's an element of tragedy to the way that he decides to continue devoting himself to a way of making movies and a way of shaping careers that's entering into its twilight. But, behind that layer of tragedy there's another layer of absurdity, like a grand, meaningful speech that moves everyone to the verge of tears before a flubbed line ruins the illusion. But, hey, that's Hollywood.
Posted by Norma Desmond at 8:00 AM

I found the movie rather entertaining, especially the sequences featuring Alden Ehrenreich and Ralph Fiennes. But in the end, this movie did not have much of a plot.