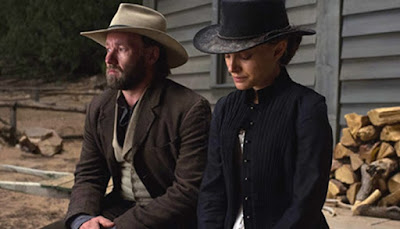 Gene Siskel had a pretty simple test for determining the relative value of a film: is the end product more interesting than a documentary about the same actors having lunch? A film with a production history as famously fraught as Jane Got a Gun can simply never pass that test. I bet a documentary about the goings on behind the scenes of this film would be fascinating. It was developed and originally set to be directed by Lynne Ramsay, but she walked off the project before shooting could begin on the first day, resulting in both a lawsuit and Ramsay being replaced by Gavin O'Connor. The role of the main character's ex-lover was originally set to be played by Michael Fassbender, with the villain to be played by Joel Edgerton. However, when Fassbender dropped out, Edgerton was recast into his role and Jude Law was brought on board to play the villain. Then, when Ramsay walked, Law went with her, as did original cinematographer Darius Khondji. Bradley Cooper was then brought in to replace Law, Mandy Walker stepped in as cinematographer, and Edgerton and Anthony Tambakis were hired to rewrite the script that had been prepared by Brian Duffield. Finally, Cooper withdrew and Ewan McGregor came aboard to take his place. All that fuss and the result is really nothing to write home about, with Jane Got a Gun ending up being, at best, an okay B-western, and, at worst, a messy mix of the original vision plus all the subsequent visions of the story.

The story told by Jane Got a Gun is actually a pretty simple one: Jane (Natalie Portman) and her husband Bill (Noah Emmerich) have been living out on a remote homestead in New Mexico, trying to start a new life for themselves and their young daughter while also hiding from their past with the outlaw Bishop gang, led by John Bishop (Ewan McGregor). The gang catches up with Bill in the nearest town, resulting in him riding home with several bullet wounds to warn Jane that they've been found. Not wanting to abandon her husband to his fate, Jane takes their daughter to a safe house and then sets out to get help in defending her home, seeking it from Dan Frost (Joel Edgerton), who was at one time her lover. Still holding a grudge against Jane for what he sees as he betrayal of him, Dan declines to help her save her husband, but finds himself drawn to her side anyway. As the Bishop gang closes in ready to lay siege, Jane, Dan, and the dying Bill prepare to hold their ground as best they can, while Jane and Dan reckon with their past together in the process.

As its production became more complicated and subject to greater and greater turnover in terms of cast and crew, with Natalie Portman, the star and one of the producers, as the only constant, Jane Got a Gun developed a reputation for being a "vanity project" for Portman that had gone off the rails. That's not quite fair to Portman, both because just about the only way for a woman to get a decent role in a movie (which the character of Jane presumably was in its original rendering) is to take charge and help guide the project into being, and because if there's any "vanity" on display here, it does not belong to her. Jane is ostensibly the protagonist and her name is in the title, but I'm not sure that it's actually her film. Because the premise of the story - three people are holed up in one remote location, about to engage in a standoff with ten other people - is pretty thin all on its own, Jane Got a Gun fills itself out with flashbacks which show how Jane came under the control of Bishop in the first place and how she met Bill (who was once part of the gang), how she and Dan were engaged before he went off to war, and how Dan came looking for her after finally coming home only to find her gone. I respectfully submit that this film is much more about Dan, the character played by one of the credited co-writers, about his pain and anger at having lost Jane after going to such great lengths to search for her, and about the effect it has on him when he finds out what happened to Jane while she was under Bishop's thumb, than it ever is about Jane and her own relationship to her own experiences.

There is a moment in the film when Jane calls Dan out, telling him that his story isn't the only story and that, if he would only pay attention for a moment, he would see that there are other stories to be told, but those are ultimately just words. We learns about what happened to Jane, but we see it through Dan's eyes, and it's Dan, rather than Jane, who gets the important character arc, with the narrative shaped by his growing knowledge as a result of admissions made to him at key points through the film. Jane is essentially the same woman at the end of the film as she was at the beginning, defined by little more than her identity as a mother (her hatred of Bishop is tied up in her role as a mother, her desire to survive is rooted in her daughter, her marriage to Bill is borne out of events concerning her first child, and the ending serves to reconfirm her status as a mother); it's Dan who grows and changes. Jane Got a Gun is less the would-be feminist revenge western it's dressed up as being than it is the much more typical tale of a loner reluctantly drawn into someone else's fight because deep down he's a hero.

Jane Got a Gun is visually derivative, too, borrowing liberally from John Ford, particularly from The Searchers. That's not necessarily bad in and of itself - Quentin Tarantino does a lot of visual borrowing, after all, and The Searchers seems to be a favorite of his for that purpose - but Jane Got a Gun has so little personality of its own (possibly due to the chaotic way that it came together) that that borrowing only serves to underscore the film's complete lack of personal vision. It's a film that plays as if it's going through the motions out of obligation, rather than passion, and it's assembled in such a way, jumping back and forth in time to fill in the blanks in Jane and Dan's history, that it disrupts the flow of the present day story and robs it of the momentum that it desperately needs. As a result the big action sequence at the film's climax ends up feeling rushed and rather perfunctory, and then it just dissolves into nonsense when the film decides to use its final minutes to spring a "surprise" so trite you can't help but roll your eyes at it. There's no telling what kind of movie Jane Got a Gun would have been had it proceeded as originally planned, but in its present form it's a film perhaps best suited to curiosity seekers who want to see the end result of one of the most notoriously troubled movie productions of recent years.
Posted by Norma Desmond at 12:00 AM