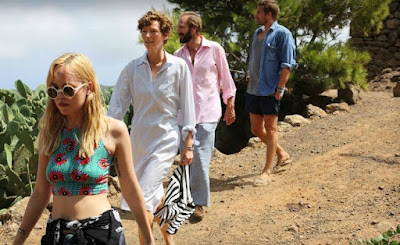 "You can't or you won't?" The main character in A Bigger Splash can't speak; she's on doctor's orders to rest her vocal chords lest she destroy her voice and her career as a rock star. That question, when put to her, at first seems merely cheeky, an attempt by the youngest member of the group that surrounds her to be provocative, a superficial feint at insight. Once the film reaches its conclusion, you realize in hindsight that that line actually said it all. What is the root of the tensions between the four principal characters if not the struggle between "can't" and "won't"? These are people accustomed to getting everything they want, so it must come as a shock to the system to have to choose between things they want, to say "no" even though they might want to say "yes," and to realize that how much power is contained in that denial. From the director of the great I Am Love, and based loosely on Jacques Deray's La Piscine, A Bigger Splash is a sumptuous, sordid psychological drama about four people exiled together in paradise and all the things they can't (or won't) do.

At the center is Marianne (Tilda Swinton), a rock star who appears to be part David Bowie, part Chrissie Hynde, part other assorted influences. Years ago she was involved with her former producer Harry (Ralph Fiennes), a hedonist who believes that anything goes at any time, but for the past several years she's been involved with Paul (Matthias Schoenaerts), a documentary filmmaker to whom she was introduced by Harry. As the film opens, Marianne and Paul are hiding out on the island of Pantelleria, taking a holiday which will allow Marianne to escape the limelight and rest her voice, but the relaxed rhythm that they've settled into is disrupted by a phone call from Harry, announcing that not only has he tracked them down, but he is on a plane about to touch down on the island. Not without some reservation, Marianne and Paul drop everything and head out to the airport, where Harry reveals that he's brought along a surprise: Penelope (Dakota Johnson), the daughter he's only just learned he has. After spending the rest of the day fishing for an invite to stay with them, Marianne and Paul finally relent and offer father and daughter rooms in their villa.

Alone together in that villa in the middle of the countryside, the tensions between the four ebb and flow. Most of it is rooted in the fact that Marianne and Harry used to be a couple and he still carries a very bright torch, despite having brought Marianne and Paul together. It wouldn't be entirely accurate to describe Harry's attitude as simple jealousy, though there is an element of that. It's more like entitlement, a feeling that since he brought them together, it's therefore his right to intrude on them whenever he likes and in whatever way he likes in perpetuity. For their part, Marianne and Paul seem to have quietly agreed that they can't just cut Harry loose, no matter how obnoxious he might be, and have to give him some leeway - though, it's worth noting that it's Marianne who seems more willing to excuse Harry, while increasingly Paul seems to barely tolerate him. The tension between the three of them is volatile enough, but the addition of Penelope to the mix is what makes the situation explode. Seemingly always on the margins of things, she claims towards the end that all she wanted was to be "left alone," though like the "can't or won't" line, this one is open to some interpretation. Who is it that she wants to be left alone by? And what is it that she wants to be left alone from?

Penelope is the story's wildcard, who none of the other three are quite sure what to make of. She's jealous of Marianne, who exists at the center of everyone's attention, the one everyone seems to want, in some way or another, and she attains that status effortlessly, whereas Penelope, who describes a life of being shunted off somewhere whenever her mother finds her presence too intrusive, has to go out of her way to get attention. She wants Paul's attention and does a lot of coquettish things to try to get it, but events towards the end leave you questioning exactly why she wants it. It's not just attraction, or even jealousy of Marianne and a desire to take something from her; it's also maybe rooted in something darker, deeper, never quite confirmed out loud unless you read into the final exchange between Penelope and Harry, wherein she robotically expresses her feelings about something that happened earlier in the day, speaking in the platitudes of an awakening experience. Does she say it like that because she's toying with him, or does she say it like that because they both know that she's said those words before (or, alternately, that those words were said to her)? Given how things turn out, it seems safe to say that she's hiding more than just the one secret that she actually reveals close to her vest.

For a film which features an almost aggressive level of physical nudity, A Bigger Splash remains veritably shrouded on a narrative level. The most important events - a suicide attempt, a liaison, whatever has gone on between Harry and Penelope during the course of the long summer that they've been travelling around and getting to know each other - happen offscreen, while onscreen Guadagnino seems determined to look just off to the side of the story rather than directly at it. Perhaps that's because the characters would prefer not to look directly at themselves, because to do so would be to see the damage that lurks beneath their endless and unassailable privilege. At least, that's what I make of the way the film's focus gets drawn, briefly but repeatedly towards the end, to the refugees that have escaped to Pantelleria and have been rounded up and interred by the local police. The first time the film brings them onto the scene, it involves a fleeting but tense standoff between them and two of the principals, their greater number suggesting their potential for danger. Later, however, the film confirms that it's the principals - rich, white, and (in one case) famous - who present the real danger. They're valued above all other kinds of people, which make them untouchable, which allows them to get away with anything, leaving the consequences to be suffered by other people, be it by accident or by design.

While never quite reaching the glorious heights of I Am Love (having never seen La Piscine, I can't make any comparison there), A Bigger Splash is nevertheless a fascinating and gorgeously rendered film (the cinematographer is Yorick Le Saux, who also lensed I Am Love, Only Lovers Left Alive, and Clouds of Sils Maria). Swinton, her performance largely wordless save for a few lines uttered in a hoarse whisper, is her typically magnificent self, doing more with less, while Schoenaerts brings dimension to his character's increasingly frequent bouts of brooding, and Johnson surprises with her effectively enigmatic performance. But it's Fiennes, in a performance so unfettered and loose that it sometimes seems like it might come flying off the screen, who steals much of the show as the bon vivant who wouldn't recognize a boundary if he crashed through it face first. He's the guy who has to be the life of every party, an affectation which seems to exhaust even him by the end of the film, that "if it feels good, do it" facade starting to crumble under the pressure of close quarters and all those unspoken things starting to be voiced. A Bigger Splash is a sometimes maddeningly opaque film, but it's never less than a magnificently acted one, which makes it easy to embrace its mysteries.
Posted by Norma Desmond at 8:00 AM