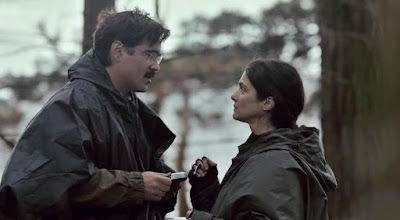 Having seen Yorgos Lanthimos' Oscar nominated 2009 film Dogtooth, and having a general idea of what this film is about, I was prepared for The Lobster to be weird. I don't think anything could really have prepared me for how sublimely bonkers it actually is. I'm not sure anything I could say about it could properly express just how bizarre and funny it is. Allow me to say this: the premise, in which the characters live in a world that demands that all adults be romantically paired and where anyone who finds themselves single must find a new partner within 45 days or be surgically transformed into an animal, turns out to be the most normal thing about it.

The Lobster doesn't seem to take place in the future so much as in an alternate universe, and Lanthimos doesn't give us much context for why things are the way they are (sort of like he's the parents in Dogtooth and the audience is the children, forced to accept that the world is as he tells us it is) or any indication that things have ever been any different. He simply drops us right into the thick of things with the protagonist, David (Colin Farrell), having been left by his wife and preparing to go to the hotel for singles where he will hopefully meet his next mate. If he fails to meet someone new and form a new partnership, he'll be transformed into the animal of his choice, just as his brother, who is now a dog, has been. Once he gets to the hotel he has 45 days to make a match, though he can add one day to that time limit every time he captures one of the militant singles who live in the woods near the hotel, otherwise he will be turned into a lobster, an animal he chooses because "lobsters live for over one hundred years, are blue-blooded like aristocrats, and stay fertile all their lives. I also like the sea very much."

There are many rules of conduct at the hotel and even once a match has been made, the couple in question isn't yet allowed to leave, having to live together at the hotel for a period of time to ensure that they're a true match. This happens for the Limping Man (Ben Wishaw), one of the friends that David makes, who had hoped to find a woman with a limp so that they would have something in common and then, out of desperation, started pretending to be a sufferer of frequent nosebleeds in order to form a match with Nosebleed Woman (Jessica Barden). When they announce their match, the hotel manager congratulates them and also advises that "if you encounter any problems you cannot resolve yourselves, you will be assigned children. That usually helps." And, indeed, when David later encounters them, they now have a little girl. For David, things don't go quite as well, as he struggles to connect with anyone and as his days wind down, pretends to be a psychopath in order to attempt to match with the Heartless Woman (Angeliki Papoulia, also a star of Dogtooth and Lanthimos' Alps). That, however, proves to be an error in calculation as he ends up fleeing the hotel for his life and then being accepted as one of the "loners," the group of singles who live in the woods and whose rules are different from the rest of society's but just as strict. Which turns out to be a problem when David meets the film's narrator (Rachel Weisz) and they fall in love, breaching the rules of being a loner in the process.

Still with me? The plot of The Lobster is very strange (and, believe it or not, there are strange details about the plot that I've actually left out; it's a film that is constantly upping the ante in terms of what it throws at the audience) and the style of filmmaking makes it stranger still. The characters speak in a manner of such dry guilelessness that it seems alien (sample dialogue: "You need to choose a companion that is a similar type of animal to you. A wolf and a penguin could never live together, nor could a camel and a hippopotamus. That would be absurd."), and as the section of the film which takes place with the loners carries on, more and more animals can be seen wandering through the woods signaling what has become of the people David has left behind at the hotel, though the loners don't even seem to notice them. Lanthimos presents everything at face value; the more bizarre something is, the more he treats it as something normal, so much part of the tapestry of life as the characters know it that they don't even bother to remark upon it. He also bucks the traditional sorts of narrative where the hero living in a society defined by its strict control over individuals would try to overthrow the system and bring change. David doesn't want to change the world. He just wants companionship and to avoid being turned into a lobster.

That said, that doesn't mean that The Lobster is devoid of meaning or that it's being weird simply for the sake of being weird. At its heart it's a story about relationships, about how what's between two people can't be legislated by an outside force (be it an entity that wants to force people together, or one that wants to force people apart), and about how a relationship is a process of negotiation and compromise. The people in the film go about seeking mates with the notion that like attracts like - the Limping Man wants to find a woman, like his late wife, who has a limp, the Nosebleed Woman wants to find a man who gets frequent nosebleeds and understands her problem, the Heartless Woman is only interested in a man as emotionally detached and violent as she herself is, and when David falls in love with the narrator, who like him is short sighted, one of his greatest worries becomes another man whom he suspects might also be short sighted and therefore a threat - but they all end up either pretending or coupling with a pretender. The Limping Man gives up on what he's looking for and resigns himself to a life of having to periodically smash his face against a hard surface to start a nosebleed so that he can marry Nosebleed Woman. David pretends to be a psycho in order to pair with the Heartless Woman and, later, goes to great lengths to ensure that he and the narrator are bound together by a defining feature. Which begs the question: is The Lobster an optimistic movie about people willing to go to great lengths to become the person that the person they want needs them to be, or is it a pessimistic movie about the lengths people will go to in order to avoid ending up alone? After one viewing I'm not sure. I was too busy laughing and marveling at the insanity.
Posted by Norma Desmond at 6:33 PM