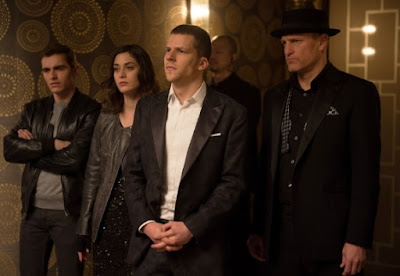 The world probably didn't need a sequel to the 2013 heist by way of magic film Now You See Me, but it made $117 million at the domestic box office so we get one anyway. Never mind that part of the reason the original made as much as it did was surely that it was something new and different, which could go a ways to explaining why the follow-up is finding considerably less success, dismissed by audiences as just another drop in this summer's ocean of sequels. Whether the sequel is actually more worthy of success than the original is difficult for me to say, because as I was watching this one, which continues the story set up by the first and is always referring back to it, I became increasingly aware of how little I remembered the first one. To me, this movie might as well have been called Now You See Me: Or Do You?, as I suspect that it will have more or less the same lasting impact on me that the first one did.

Picking up a little over a year after the events of the first film, part 2 finds the Horsemen down one member, with Isla Fisher's Henley having opted out, which is apparently an option for someone wanted by the FBI, and the rest - Daniel Atlas (Jesse Eisenberg), Merritt McKinney (Woody Harrelson), and Jack Wilson (Dave Franco) - living in hiding in New York while awaiting instructions from Dylan Rhodes (Mark Ruffalo), their inside man with the FBI. When Rhodes finally tells them what their next move will be - one which involves the addition of Lula (Lizzy Caplan) to take Henley's place - he meets with some resistance from Atlas, who resents having to take orders from Rhodes and believes that it's about time that he was put in charge of leading the group.

Atlas' belief that the Horsemen shouldn't be following Rhodes gains traction once Rhodes' plan goes wildly awry, resulting in him being exposed to the FBI as a double agent and the Horsemen being kidnapped to Macau, China, where they're forced by Walter Mabry (Daniel Radcliffe) to steal a data-mining device from a high security facility housed beneath a casino. Rhodes, meanwhile, is left trying to sort out how things have gone so far sideways and the trail leads him back to Thaddeus Bradley (Morgan Freeman), who has been sitting in prison since the last film. With Bradley claiming to hold the key that will save the Horsemen and expose the mastermind behind the plot, Rhodes is forced to put his enmity for Bradley, whom he blames for the death of his father decades earlier, aside and work with him for the greater good. Of course, that's assuming that Bradley's offer of help isn't itself an illusion designed to mask the real game that he's playing.

One of the first hurdles that Now You See Me 2 has to clear is that, because of the way the first one played out, the audience will spend the film actively looking at every scene and every interaction as if it can't be taken at face value. That moment, where the film reveals that it was cheating all along, does happen in the second film just as it did in the first and involves a character whose motivation for what is ultimately a pretty pointless lie that harms no one except himself basically boils down to "eh." The film softens the blow of its "gotcha" on the audience by using Lula to, if not break the fourth wall outright, then to put a dent in it at least and speak to the cliches that the film is going to rely on to usher its characters safely through their seemingly impossible situation. That doesn't change the fact that the film's plot doesn't really hold together if you try to draw a straight line from the beginning to the end (to say nothing of trying to draw a straight line from the first film to the second), but I think the film's point is that we shouldn't worry about that and should instead just sit back and enjoy the illusion for its pageantry.

As a film Now You See Me 2 is a fairly frivolous piece of work, though it does feature a rather marvelous fight sequence wherein Rhodes takes on a bunch of bad guys in a market place in Macau (and the film is, in general, bolstered by Ruffalo having a bigger and more involved role then he did in the first). Aside from that, Caplan makes a nice, goofy addition as Lula, and Radcliffe is in fine form as the story's villain, particularly in the moments where he realizes that he's failed at his attempt to be intimidating and dissolves into sniveling like the spoiled brat he is. Now You See Me 2 may be an exercise in convoluted storytelling and twists for the sake of having twists, but it has enough entertaining elements to make it a worthy choice on a summer day where the box office pickings are slim.
Posted by Norma Desmond at 6:39 PM