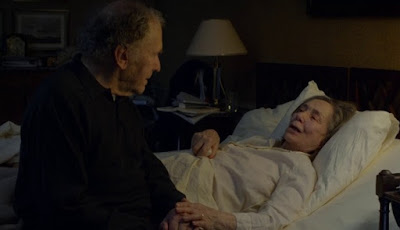 Michael Haneke is known for a lot of things as a filmmaker and one of them is certainly the sinister tinge that his films always have to them. Even Amour, which is ostensibly a simple and straightforward film about an elderly couple struggling through the onset of illness, has that dark undercurrent lurking beneath it and, if anything, the culprit here is even more terrifying than in Haneke’s other films. In other films, the root is a person, which means that there’s a possibility that the fear can be abetted through reason or sympathy (not that that ever actually happens in Haneke’s films, but it could); what makes the sinister element of Amour so effective is that it’s something entirely inescapable: the natural effects of growing old. Told with stark simplicity, aided by fearless and deeply-felt performances, and held together by that brutal truth that time will eventually come for everyone, Amour is a rich and completely compelling film.

The couple are Anne and Georges (Emmanuelle Riva and Jean-Louis Trintignant), a long married couple whose life is upended when Anne suffers an episode of something like catatonia at the breakfast table. One moment she and Georges are talking, and in the next she seems to have drifted out of consciousness, though she remains awake and merely unaware of Georges or anything else around them. A minute or two later she’s back and chastising Georges for leaving the water running. A trip to the hospital is made, and then surgery, and then she returns home even worse for wear, having been left paralyzed along one side. She makes Georges promise that he’ll never let her be hospitalized again and, as her health swiftly declines, he holds fiercely true to that promise, refusing to waver in his loyalty even as it becomes increasingly apparent that he can’t care for her on his own and even as their daughter (Isabelle Huppert) urges him to come to his senses. The sad truth is, Anne has asked Georges to make that promise because she knows that the end is near, while Georges has made the promise because he remains optimistic that she may get better with the proper care that only being at home with him can provide.

From the moment Anne has her episode at the breakfast table, Amour is a story which charts the excruciating physical decline of a person in ill-health. When we talk about characters aging over the course of a film, we typically focus on stories where time is measured in years, where a character ages from something like 20 to 40, the actor assisted by makeup. But, though it takes place over the span of months rather than years, Amour is an amazing example of a film following a character as they age an incredible amount, and of a performance which guides a character through that huge transition. Anne and Georges are elderly as the film opens, both being in their 80s, but they’re active and able-bodied, still possessed of vitality, if not of youth. As the film progresses, and Anne’s health declines, she becomes a total shell of the person we met at the beginning of the film and seems a decade removed from her, even though it has only been months. That feeling that so much time has elapsed in quality, if not in quantity, is a real tribute to Riva’s performance, which becomes more and more interior as the film progresses, more and more removed from “life,” and more and more entrenched in the pain she suffers as a result of being in a body that is steadily shutting down.

Riva received an Oscar nomination for her performance in Amour, in one of those increasingly rare instances where AMPAS recognizes the skill and sheer power of a performance even though it is not in the English language and even though the performer does not submit to the rigorous months-long process of “campaigning” for a nomination on the awards circuit. The performance speaks for itself and the recognition Riva received requires no justification. What does require some justification is the way that Trintignant was totally ignored for his performance, which is just as crucial to the film’s success and just as skilled. It’s Riva and Trintignant together who create the natural, lived-in quality to the way that Anne and Georges interact and which in turn gives the story its weight. If we don’t believe in that relationship, then the ending is meaningless – it’s just cinema, and not something which touches a raw nerve of truth. Amour isn’t about Anne’s illness; it’s about Anne and Georges’ relationship and how it is challenged and changed by the illness, and about how loving someone and sharing a life with them can be as much about knowing how to hold on as knowing how to let go. Riva’s performance could not exist without that of Trintignant, and Trintignant’s performance could not exist without that of Riva; each is one half of the whole of what is occurring on screen.

Off screen, credit must be given to Haneke, who unfolds Amour at a deliberate but gentle pace, patiently exploring the rhythms of Anne and Georges’ life together and then just as patiently exploring how, beat by beat, that rhythm is disrupted and eventually destroyed. He tells the story in a matter of fact manner, neither overplaying the angst nor shying away from the most devastating aspects of the subject matter. Amour is a film that is unflinching in its depiction of the indignities of aging and illness, and while it is sympathetic to its characters, it’s never sappy. Haneke favors a minimalist, unobtrusive approach, one that prefers subtlety over underscoring every dramatic moment with a stylistic flourish. That's not to say that the film is without style, as there is a dream sequence which plays like something out of a horror film and reimagines the vague terror of succumbing to disease as akin to being attacked, and it's certainly a stylistic choice to confine the story to the apartment where Anne and Georges live, leaving it only at the beginning of the story when they go out to a concert but never again, using that fixed setting to show how dealing with illness makes their life increasingly insular and isolated and small, with Anne eventually never leaving her bed, let alone the apartment. Amour is filmed in a way that doesn't call attention to itself and instead feels like it's living each moment along with the characters. It doesn't force anything and it doesn’t just feel all the more compelling for that, it feels absolutely timeless, too.
Posted by Norma Desmond at 8:00 AM

What a great, bittersweet film this is. It is definitely a timeless sort of movie as this issue will continue to crop up as long as couples grow old together. Glad you include it as an essential.