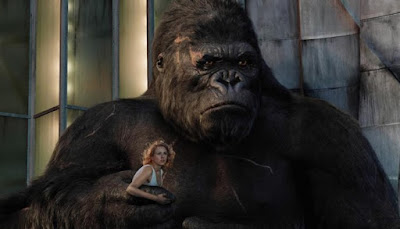 The world didn't necessarily need a new King Kong in 2005, but the advances in technology by that point being what they were, I can understand Hollywood's inclination to revisit one of cinema's most iconic characters. I'm not sure why anyone thought it needed to be 3 hours long, particularly when it tells essentially the same story as the 1933 version which ran at a fleet 100 minutes, but I can definitely understand why it was tempting to have another go at the story. Coming off the massive success of the Lord of the Rings trilogy, director/co-writer Peter Jackson had the luxury of indulging himself and so he created a King Kong that is more padded than it needs to be, and yet so artful and, at times, so soulful that those self-indulgent stretches are easily forgiven.


The Story
Carl Denham (Jack Black), a desperate filmmaker, scams his way into an expedition to a remote, supposedly non-existent, locale known as "Skull Island," in order to finish his latest (and maybe "last") film. Coming with him are his cast and crew, which includes Ann Darrow (Naomi Watts), cast at the last possible moment and because she's the right size for the costumes. On their arrival at the island, the cast and crew immediately learn that there's a reason no one goes to Skull Island and after narrowly escaping an encounter with the locals and making it back to the steamer ship, Ann is kidnapped and ritualistically sacrificed to a giant gorilla known as "Kong." The rest of the ship's party goes after her, encountering the many wonders and dangers of Skull Island, which includes all manner of dinosaurs, and Denham comes up with a plan to try to recoup the losses resulting from the trip by bringing Kong back to New York and turning him into a sideshow. Meanwhile, Ann, though initially afraid of Kong, comes to form a bond with him, though that won't be enough to save him once he's finally brought to New York and goes on a rampage.


The View from 2005
The Good: "The director may be working off a borrowed dream, but he utilizes every technical advance of the last seventy-two years to reimagine the 100-minute black-and-white original as a three-hour explosion of color and FX miracles. What you see will spin your head six ways from Sunday." - Peter Travers, Rolling Stone

The Bad: "Three hours. Make that 188 minutes, each one longer than the next, until just the thought of the Empire State Building is enough to evoke a warm, cozy feeling." - Mick LaSalle, San Francisco Chronicle


The View from 2015
I've seen Jackson's version of King Kong a few times, but until my recent rewatch I probably hadn't seen it in about 8 years or so. I remembered a lot of things about it (the way Ann wins over Kong, the way the movie idol played by Kyle Chandler is deployed as comic relief, the long sequence during which Kong fights not just one T-Rex, but three) and forgotten others (such as just how long it takes for the film to finally get to the island, and how... "problematic" things get when the movie crew encounters the locals), but my general impression of it remained the same. King Kong is a great spectacle, determined to give you your money's worth by giving you everything: action and adventure, comedy, drama, a love story, fantastic creatures, and a giant gorilla out of which the film gets an amazing amount of pathos and even humanity given that it's a computer generated creation. Some of the effects in King Kong don't really hold up now, such as the sequence in which the crew gets caught in a stampede of dinosaurs and looks like exactly what it is - an uneasy marriage of actors running in front of a green screen and dinosaurs created out of 1s and 0s being added after the fact - but the most important effects work is that involved in creating King Kong himself, which remains superb. As conceived and brought to life by the effects team and performer Andy Serkis, Kong isn't just a fantastic creature, but a genuine character.

A decent amount of King Kong's runtime is devoted to developing the relationship between Ann and Jack Driscoll (Adrien Brody), the writer kidnapped by Denham to pen the script for his movie, and although Driscoll is the flesh and blood human and Kong the CGI creation, it's the relationship between Ann and Kong that is central and far more compelling. I'm probably biased, since I tend to think that Naomi Watts is basically always worthy of an Oscar nomination, but what she does in King Kong really is extraordinary. While Serkis deserves credit for another in his ever growing list of wonderful motion capture performances, providing Kong with the body language and expressions which go so far in making him seem so real, it's the way that Watts as Ann interacts with Kong that gives the film its emotional impact. King Kong isn't a "love story" between Ann and Kong, but in Jackson's version it's very much a story about a creature that is exploited and misunderstood and the one person who sees beyond the destruction that he can create to the soul that resides inside. It's asking a lot of an actor to create a genuine connection to something that a) isn't human, and b) isn't even really there, but Watts accomplishes it in effortless fashion and the scenes between her character and the giant gorilla are without question the best in the film. King Kong is a work that plays out on a grand scale, and epic piece entertainment with a capital "E", which is perhaps why Watts was overlooked for the major awards, but that's a shame because she really does carve out a marvelous performance in the midst of all the smashing and bright, flashing things.

Beyond the performances of Watts and Serkis, King Kong is a bit of a mixed bag but one that ultimately has more to its credit than not. The voyage to Skull Island could stand to be much, much shorter, but I would gladly sit through that in order to get to the weirdly enchanting little interlude towards the end when Kong discovers ice and goes skating with Ann, a brief moment of joy in the middle of the climactic action sequence which finds Kong escaping the theater and destroying downtown Manhattan before getting to the showdown atop the tower. The stuff with the natives of Skull Island is a little harder to defend because it just feels so racist and regressive and ugly. Granted, the original King Kong, to which this one hews relatively closely, is itself rooted in racist anxieties and ideas and maybe there's just no way to completely separate out the narrative from that founding ideology, but seen in 2015 it just plays really bad. Overall, however, King Kong is still a movie that works, a great piece of entertainment that looks to (and often does) capture that magic that movies are supposed to be all about.
Posted by Norma Desmond at 7:51 PM

The Skull Island stuff played as racist in '05, so that's no surprise. Getting there takes way too long. It should've been chopped down to less than half its current length. And I saw this on the big screen and the scene of the crew running along the dinosaurs looked awful back then. I think Jackson and his team tried to do a little bit too much.

All that said, this is a movie that works for all the reasons you give. I 100% agree that Watts was just amazing and deserved some sort of recognition for basically playing opposite a green screen or a crew-member holding up a basketball, or whatever was used for her to direct her line of sight. As a result, her character's relationship with Kong is remarkable. Great review.

Yeah, the racist elements of the Skull Island sections make me really curious to see how the upcoming prequel film will handle things. All things considered, it might be better for them to decide that there are no humans actually living on Skull Island after all.