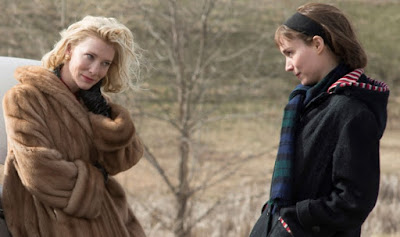 It isn't until Carol's final, breathtaking scene that you can appreciate just how masterfully director Todd Haynes has controlled the film's tone. For most of its 118 minute running time, it's a tightly contained piece that holds a lot back, but in that final moment the dam finally breaks and it becomes clear that the degree of restraint Haynes has demonstrated in unfolding the story up to that point has been very much a deliberate choice. In terms of the story, it's also a wholly appropriate one, given that the narrative turns on something which must remain hidden due to circumstance, but which ultimately can't be denied. While Carol might seem at first to be too cold and closed off to connect with, it tells such an inherently simple and human story, and is so profoundly moving, that in the end connection becomes easy.

Adapted from Patricia Highsmith's novel The Price of Salt, the story centers on Therese Belivet (Rooney Mara), an aspiring photographer who has taken a job in the toy section of a Manhattan department store during the holiday season. While working that job she has a chance encounter with Carol Aird (Cate Blanchett), who is drawn towards Therese after they spot each other through the crowd and ends up buying a train set for her young daughter and accidentally (or not) leaving her gloves behind on the counter. Therese ensures that the gloves get packed up with the train set for delivery to Carol, who repays her kindness by inviting her first to lunch and then, afterwards, to spend a Sunday afternoon at her house in the New Jersey suburbs. Nothing is explicitly said between them, but they've begun the tentative first steps in a courtship, albeit one which is interrupted early on by Carol's ex-husband, Harge (Kyle Chandler), who finds Therese at Carol's house and understands better than she does what that means. The fight which ensues, informed by the history of the marriage which includes Carol's brief affair years earlier with her friend, Abby (Sarah Paulson), and by the fact that, despite their divorce, Harge still harbors hopes that they might reconcile, drives a temporary wedge between the two women, but when Harge attempts to exert control over Carol by filing for custody of their daughter, she feels compelled to rebel.

Informed that it will be months before the matter goes into court and that there's no use in fighting against the temporary injunction Harge has been granted for custody of their daughter, Carol decides to take a road trip West and invites Therese to join her. Her acceptance of the invitation results in the dissolution of her relationship with her boyfriend, Richard (Jake Lacy), but once Therese steps into Carol's Packard to begin the journey, she doesn't look back. Though things remain platonic for the first part of their trip, Carol and Therese eventually give in to their attraction to each other, having found in each other something to abate the loneliness that each of them feels. Their happiness is brief, however, as once they discover the lengths that Harge is willing to go to in order to bend Carol to his will, and knowing that a legal battle won't be a fair one given that in the 1950s homosexuality was both criminalized and classified as a mental disorder, Carol finds herself in a uniquely painful position. In order to maintain a relationship with her daughter, she'll have to give up her relationship with Therese. Yet, giving up her relationship with Therese will mean denying herself the chance to be happy and forcing herself to try to be someone that she's not. No matter what she does, she'll be resigning herself to the loss of something vital and the film's second half turns on the consequences of that choice.

Carol is a meticulously crafted film that so luxuriates in period detail that, like Haynes' Far From Heaven, it plays less like a film set during the 1950s and more like an extraordinarily progressive and provocative film from the 1950s. For much of the story everything is just simmering under the surface and because of that things proceed in a way that is coded in order to maintain the image of "normalcy" that society demands, from the stolen glances to the gloves left behind on the store counter to the way that Carol hastily moves to put her shoes back on when Harge comes home unexpectedly and finds her entertaining Therese. As adapted for the screen by Phyllis Nagy (making this the first Haynes' feature that he hasn't had a hand in writing) the film contains quiet, almost imperceptible layers of story playing out beneath the narrative to illustrate how the characters are playing out two lives all at once, one public and socially acceptable, the other secret and condemned by society. If the film seems restrained, it's because it's reflecting the existence of the characters who are fighting against their nature in order to fit into the way of life that society has deemed acceptable, but Carol ultimately reveals itself to be deeply felt and emotional, possessed of a soft center underneath its superficially hard shell.

As the two leads (and, despite the fact that if Mara is nominated for an Oscar it will likely be in the Supporting Actress category, she is very much a lead here), Mara and Blanchett are more than up to the task of playing out the complexities of both their individual characters and the relationship between them. As seen through Therese's eyes, Carol is an enigmatic figure, fascinating but somewhat remote, and what Blanchett has to do in the film is tricky because Carol has to seem like she's drawing Therese in and holding her at arm's length at the same time. Although she has put up a wall of self-protection around herself, Carol is an extremely vulnerable character at risk of coming completely undone by the pressures of conforming and being what she's "supposed" to be and by the loneliness and isolation of her situation, and Blanchett plays these beats marvelously. That said, though Blanchett is great, the film ultimately belongs to Mara, whose Therese is desperately uncertain of herself but never quite naive. She's adrift when she meets Carol, going through the motions of all the things she's supposed to do in order to fulfill her destiny as a woman, but through the course of their relationship she comes to realize who she is and to develop a real sense of self. That's a large part of why the film's ending has such an impact, because what she does is not an act of surrender but a declaration of who she is, what she wants, and of the life she's going to choose to live. It's stunning in its subdued way and, like the rest of the film, deeply resonant.
Posted by Norma Desmond at 10:00 PM