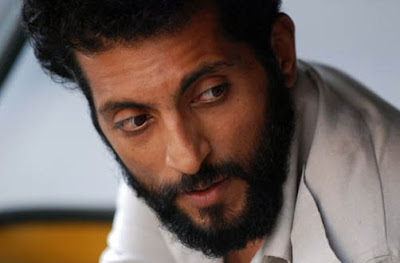 In 2008, a film came out about a young man living in poverty in India who finds himself with the opportunity to come into a great deal of money, but who is far less interested in those riches than he is in reuniting with the woman for whom he would do anything. That movie was uplifting and widely celebrated and would eventually be rewarded with the Oscar for Best Picture. But in that same year that Slumdog Millionaire won hearts and minds, another film was released, one with a similar premise but which is ultimately as different from Slumdog as night is from day. In comparison, Richie Mehta’s Amal is a much quieter and slower movie, lacking the glossy high energy of Slumdog, but beautifully telling the story of a good man surrounded by greed and despair, and of the power of money to insulate us from hardship but also isolate us as human beings. It’s a simple story, a modern fable in some ways, but it’s incredibly moving in that simplicity.

Amal begins (and, in certain respects, ends) as the story of an old man (Naseeruddin Shah) who wanders the streets of Dehli looking like a vagabond, but who is secretly a millionaire. Having grown disillusioned with the ugliness that surrounds him as a man of wealth – the greed and self-centeredness of the people in his circle, the blindness of the suffering and need of people of lesser means, the endless pursuit of more – and knowing that he is dying, he wanders the country looking for proof of goodness in the world so that he might reward it. In the course of his travels he meets Amal (Rupinder Nagra), an auto rickshaw driver who treats him with kindness and respect, even in the face of abuse, and demonstrates that while he understands the value of money, he won’t be a man ruled by the pursuit of it. Shortly after their encounter, the old man dies, but not before making a new will in which he leaves his fortune to Amal, provided that his executor can find him within 30 days of his death.

Finding Amal would be no easy feat in the best of circumstances, as the executor (Roshan Seth) learns that there are hundreds of men named “Amal Kumar” in Dehli, and the only other information he has to go on is the name of Amal’s father, but he also has to contend with the fact that the old man is leaving behind two sons, one of whom, Vivek (Vik Sahay), owes a considerable gambling debt to a local crime lord known as the Godfather and is desperate to get his hands on the inheritance. Since the estate will go to him and his brother in 30 days if the executor fails to locate Amal, Vivek tries to make a deal with him to simply do nothing and in return Vivek will give him some money from his inheritance. However, though he initially makes the deal, the executor doesn’t trust Vivek to hold up his end of the bargain and quietly goes about looking for Amal, becoming a changed man in the process.

I’ve said little so far about the actual character who gives the film its name, but Amal is very much his story, with the needle in the haystack search actually occupying the outer edge of the narrative. As depicted by Mehta and Nagra, Amal is not depicted as saintly, but merely as a decent man who wants to do right by people and who is, in many ways, at the mercy of the fates and of the machinations of the people around him, even if he doesn’t necessarily know it. He’s a passive character, but the film manages to make him compelling in spite of that and Nagra’s performance grounds him, ensuring that he never seems too good and too virtuous to be true, instilling in him a quiet dignity and a natural kindness as well as a will to persevere in difficult circumstances that makes him the perfect center for this story, which is also partially a love story between his character and a woman who is one of his regular customers.

As written by Richie Mehta and Shaun Mehta, adapted from the short story of the latter and the short film of the former, Amal has a plot that both plays into and against convention, taking the narrative to some expected places while also undercutting expectations in other ways. In particular, it challenges the notion of what makes a “happy” ending, delivering one which might be called bittersweet, but which is entirely in keeping with the film’s values. Hollywood has trained us to believe that in order to “win” the story, Amal has to keep from being cheated out of the inheritance, but Amal takes a different view. It may set itself up as a fairytale story, but it’s rooted much more firmly in realism than in fantasy. Of all the films I've written about for this series, Amal is probably the one with the lowest profile, but it's definitely one of the century's hidden gems.
Posted by Norma Desmond at 11:47 AM