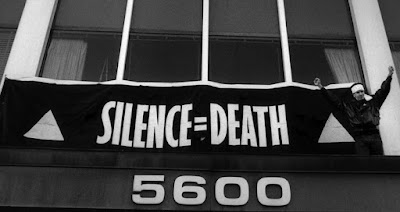 As little as 30 years ago, a government could openly stand back and willfully ignore a health crisis that decimated a community because that community was considered morally and politically undesirable, and hospitals could turn away the sick and dying, refusing them treatment for the same reason. 23 years ago, a President could go on the record as saying that those living with AIDS were suffering as a result of their own “behavior,” a statement which, at best, reads as him saying, “It’s not my problem, so I don’t care,” and at worst as him saying that gay people deserve to be punished for being who they are. When I first saw David France’s How to Survive a Plague about 3 years ago, what surprised me the most was how, in the span of 3 decades, public opinion could go from “let them die” to “let them marry.” Now, having endured so many months of Donald Trump uttering rhetoric that verges on hate speech and becoming more popular as a result, and having seen some reactions to Charlie Sheen’s announcement of being HIV positive that were so ignorant it made it seem like it was 1995 rather than 2015, nothing really surprises that much. Oh, except for a clip in this film of Pat Buchanan on Crossfire where for a moment he actually seems like a reasonable human being before turning it around and reminding you of exactly what kind of closed-minded reactionary he really is.

How to Survive a Plague is built primarily on archival footage and interviews documenting the HIV/AIDS epidemic in the United States from the mid-1980s to mid-1990s and the efforts of the activist group ACT UP to force the government to actually acknowledge what was happening and do something to stop the needless deaths occurring every day in staggering numbers. Because AIDS was, in the beginning and for a long time afterwards, considered a “gay disease” spread by immoral and dangerous sexual behavior, politicians and other people in power could get away with not caring about it, doing nothing while millions of lives were being lost. Written off by society, the members of ACT UP had to take it on themselves to gather and distribute information about the disease, its transmission, and potential treatments, as well as organize demonstrations in order to put pressure on health and drug organizations to make research a priority, and to force the issue onto the radar of politicians and the media. They staged protests, got themselves arrested, forced their way onto committees, and refused to be shut out of an issue that was literally life and death for many of them.

Over the years that the film documents, gains would be made slowly, but it was often a case of one step forward and then two steps back. For example, a drug was finally approved for treatment, but its annual cost far exceeded what most could be expected to afford and it was known to cause blindness; ACT UP began to gain ground as an organization that had to be taken seriously and consulted on the issue of HIV/AIDS, but began to develop a rift within itself between those who were at the forefront of the research and treatment issue, and those who saw those members as elitist and exclusionary; the movement succeeded in making AIDS an issue during the 1992 Presidential election, but neither of the major candidates was someone anyone felt could actually be trusted to make good on promises to do something about it. Told simply and straightforwardly, How to Survive a Plague is about progress as it is happening and it is a slow, painful, heartbreaking process as the film charts the rising death toll from one year to the next, and many of the major players express a keen awareness (and, indeed, expectation) that they may not live to see their goals met.

The men and women (mostly men and most of them HIV positive) who feature in the footage used in the film give a human face to the crisis, and a genuine sense of humanity to the story. Diagnosed at a time when it was still considered a swift death sentence, they pursue their activism with intensity, fully aware of how urgent their situation is, and justifiably frustrated and angry with how they are being treated. Treated like pariahs by their government, blamed by politicians and public figures for bringing their illness on themselves, denied health care, watching as countless friends and acquaintances die, some of them enduring the further indignity of having their corpses packed into garbage bags by the hospital and then turned away by funeral homes, the gulf that the film highlights between those with the legislative power to enact change and those suffering and dying was so wide, it’s amazing that it could ever be bridged. How to Survive a Plague is an anger inducing film that comes by its passion honestly and easily, existing in the exact moment with the people it takes as its subjects. It’s not just “angry,” however, it’s also deeply moving, poignant, and uplifting. In the footage from the late 80s and early 90s, many of the men in the film talk openly about their expectation of being dead within a matter of years. For some that was ultimately true, but others are alive and well enough to appear in present day interviews, and having lived with HIV for decades now, their struggle having changed from coming to terms with their own mortality to coming to terms with the idea that they have to keep making plans for the future, they get to enjoy the fruits of what they fought so hard to accomplish.

How to Survive a Plague is a straight forward, no frills documentary that is smart enough to allow the wealth of powerful archival footage to speak to itself. It is on the side of the people who formed ACT UP and who were not just fighting for their lives but ultimately fighting for the very right to live, but it doesn’t deify them, acknowledging that mistakes were made along the way in the efforts at activism, as well as acknowledging that it was not a monolithic organization in which the members were always in harmony with each other. It is a powerful piece of filmmaking about one of the most important periods in recent memory which will at once leave you shaking your head in disgust at the people whose ignorance and hate has left them stranded on the wrong side of history, and in awe of the determination and perseverance of the people who kept pushing for change and finally made it happen. How to Survive a Plague is a wonderful film, but it’s also a monument to the courage and sheer will of the people within it.
Posted by Norma Desmond at 2:22 PM

This is such a wonderful documentary. It certainly deserves to be mentioned alongside other "21st Century Essentials" as the movement depicted here quite literally changed the world and still has a profound impact on current day society. Great review.

It's very rare that a film can have just as much of an impact on you on a repeat viewing as it did on the first, but this one does that. It's just such a moving and important piece of work.