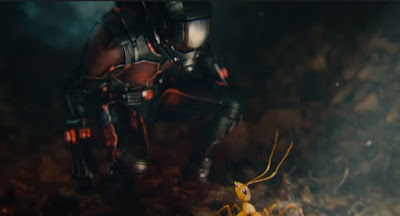 Sooner or later, the superhero movie bubble is going to burst simply as a result of saturation. It's bound to happen and possibly quite soon as from 2016 to 2019 there are already 21 such movies planned, with seven coming out in 2016 alone. A feeling of "sameness" is going to start setting in sooner or later, especially when the same story beats keep getting hit over and over again across multiple films. Now heading into the third phase of its cinematic universe films, Marvel has the genre down to a science, but it's also reaching the point where its films could start taking on an assembly line quality. A film like Ant-Man (and, arguably, Guardians of the Galaxy before it), which probably seemed a lot less essential during the planning stages than a film like, say, Captain America because there's a lower awareness of the character in terms of the general moviegoing audience, nevertheless brings something crucial to the whole Marvel project. It's sillier and lighter than a lot of other Marvel movies, but it's also a nice break from the series of movies where the fate of the entire world is at stake and everything gets resolved with a huge battle in the sky.

There are two men who will, at different times, take up on the Ant-Man identity. The first is Hank Pym (Michael Douglas), inventor of a shrinking technology which he comes to believe is too dangerous to be put out into the world. Vowing to keep the technology hidden, Pym finds himself at odds with S.H.I.E.L.D. and, eventually, with his daughter Hope (Evangeline Lilly) and his former protege Darren Cross (Corey Stoll), who has taken over the company that Pym founded, Pym Technologies. When he learns that Cross is close to perfecting his own version of the technology in the form of a suit he calls Yellowjacket, Pym decides to recruit someone to steal it. His unwitting recruit is Scott Lang (Paul Rudd), an ex-con who has just been released from prison and, despite his desire to get back on the straight and narrow so that he can have a relationship with his young daughter, agrees to go in on a score with Luis (Michael Pena, the film's MVP), his former cellmate, which finds him breaking into Pym's house and then finding that the contents of his safe is what Scott believes to be nothing more than an old motorcycle suit. It's only when he tries the suit on that he discovers its power to shrink him down to the approximate size of an ant.

Once Pym reveals his plan to Scott, he and Hope, who is secretly aligned with him against Cross, begin putting Scott through his paces in a training regimen to both get him into the right physical shape for the task and to teach him how to communicate with and control ants to help him. Though she has been helping her father out of fear of what Cross will do with the technology once he perfects it, there is a great deal of tension between Hope and Pym as a result of his secrecy about the death of her mother, as well as his unwillingness to allow her to take on the Ant-Man suit in order to complete the theft of the Yellowjacket herself, an issue which becomes increasingly fraught once it becomes clear that Cross is not only getting close to attaining his goal but, thanks to a scuffle between Ant-Man and Falcon at the Avengers headquarters, is also aware that the Ant-Man suit is still out there. As his plans to sell both the Yellowjacket and Ant-Man suits to Hydra come closer to fruition, Lang, Pym, and Hope, along with Luis and his crew, have to work together to stop Cross from unleashing a new chaos into the world.

Although many of the Marvel movies mix some humor into their tales of life and death heroics, Ant-Man is definitely more on the comedic end of the spectrum, with Rudd, always an engaging performer, investing Lang with an easy, laidback humor, and the film itself never seeming to take its high stakes plot all that seriously. Granted, this may be the result of the fact that the film, which has four credited writers (the film's original director Edgar Wright, Joe Cornish, Adam McKay, and Rudd), is something of a narrative mishmash that builds itself up by going out of its way to make Lang a sympathetic character (he's a thief, but he was a thief for the right reasons; he made choices which resulted in him missing a significant portion of his daughter's life, but any real damage to that relationship is being done by his ex-wife and her fiancee, who try to keep him away from her), unfolds its plot somewhat haphazardly (but with the same distracting enthusiasm with which Luis relates his stories within the story) and bends to the needs of setting up the events of the next entry in the shared universe stories, and throws in an unearned romantic development for good measure. In terms of screenplay, Ant-Man is definitely one of the weaker films that Marvel has put out, and its success is due less to narrative cohesiveness and more to its good vibe and it's ability to sell the audience on the fact that it's a good time.

Still, despite some issues on a narrative level, Ant-Man is basically a very likeable and entertaining movie, and one which has some pretty spectacular special effects. In this regard I'm not speaking of the action/fight scenes, though the sequence where a shrunken down Ant-Man and Yellowjacket do battle on a Thomas the Tank Engine playset is a lot of fun and nicely sends up the large-scale action and destruction of other superhero movies, but of the opening sequence where the film introduces Pym in 1989 and is able to make Douglas appear as if he just stepped off the set of Wall Street. Ant-Man doesn't end up being a top tier Marvel movie, it doesn't have the sense of cinematic or cultural import that Marvel's best films possess nor does it quite reach the same level of quality, but a case could most certainly be made for it being one of the most fun.
Posted by Norma Desmond at 7:40 PM