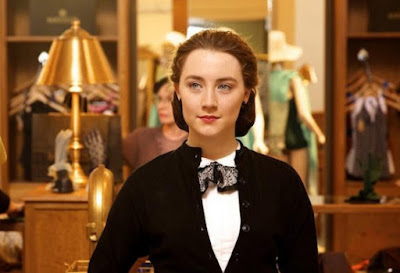 In less volatile times, a film like John Crowley's Brooklyn, adapted from the novel by Colm Toibin, might seem too gentle to be really important in the wider social context of our day-to-day lives. Right now, released in theaters at a time when politicians are competing with each other to see who can take the most vile and closed-minded position about people who didn't have the good fortune to be born in a place of democracy and/or opportunity, it's a film that touches a nerve and is a reminder that the vast majority of those people who have in the past and are right now undertaking the long journey away from everything that they have ever known and starting over in some place where everything is entirely foreign to them are doing so not to hurt anyone or destroy anything, but to try to have a better life. Brooklyn is, at its core, a love story, but it's also an immigrant story about the bravery it takes to pick up and move into the unknown half a world away, and the opportunities for kindness available to be taken by those who already happen to be there.

Set in 1952, Brooklyn opens in Enniscorthy, Ireland, where Eilis Lacey (Saoirse Ronan) is preparing to leave for the United States, parting with her elder sister, Rose (Fiona Glascott), and their mother (Jane Brennan). Going to America is Rose's idea, as Enniscorthy has so few opportunities available for Eilis in terms of work and in terms of meeting someone and starting a family, so with no small amount of trepidation, Eilis leaves on the big ship, unaware of when or if she'll see her mother or sister ever again. With the help of Father Flood (Jim Broadbent), she has a job at a department store waiting for her and lodging at a boarding house in Brooklyn run by Mrs. Kehoe (Julie Walters, absolutely perfect), but nothing can really quell the homesickness she feels and which has her feeling lost and isolated. Eventually, however, she meets Tony (Emory Cohen), and as they fall in love, she begins to feel at home in Brooklyn.

Within the year of her arrival in the United States, a family tragedy draws her back to Ireland for what she intends to be a short visit. When she arrives, however, she finds that all the opportunities that were lost to her when she left are suddenly there for the taking. She's offered a good job which will make use of the education she has received in night classes in Brooklyn, and she's pushed by family and friends towards Jim Farrell (Domhnall Gleeson), an eligible young man in town who is expected to inherit a nice piece of property from his parents. She's also, of course, reunited with her family, and the longer she stays in Ireland, the more alluring it begins to seem. Caught between two potential lives, Eilis must decide whether to stay and make a go of it in Ireland with Jim, or return to Brooklyn and the future she's begun to plan with Tony.

Brooklyn is, in many ways, an old fashioned movie. The people in it are, for the most part, simply good people with good intentions, and as an immigrant story it's the polar opposite of last year's The Immigrant, a story in which a woman steps off the boat at Ellis Island and is victimized and exploited almost instantly by the first person she meets. Here, Eilis receives help from almost all corners, from the assistance of her roommate on the ship (Eva Birthistle, so good in her brief time onscreen that I kept wishing she would somehow pop back up in the story later), who is making her second trip from Ireland to America and who gives her advice on how to comfortably get through the journey and how to ensure she doesn't get detained on Ellis Island, to the assistance of Father Flood, who finds her a job and a home and arranges for the first semester of her schooling to be paid for, to her manager at the department store (Jessica Pare) and Mrs. Kehoe and the women at the boarding house, who all help Eilis come out of her shell and become more comfortable in her new home. The tension in the story doesn't come from conflict between people, but from the eminently relatable choice that eventually presents itself to Eilis between making a life for herself in the place where she grew up, or making a life for herself somewhere new.

Working from a screenplay by Nick Hornby, which deftly mixes humor in with strong emotional beats, Brooklyn is a well-crafted story that further benefits from excellent casting. The supporting and tertiary characters who populate the edges of the narrative emerge as fully realized people and the performances by their respective actors are uniformly solid. As the two love interests, Cohen and Gleeson are both good, the former playing a character who wears his heart on his sleeve while the latter is a bit more taciturn, though no less believably smitten with Eilis for it. That she would genuinely struggle over which to leave behind and which to make a life with is entirely plausible (though a plot point which I won't reveal certainly does stack the deck in one man's favor) and the relationships that she develops with each are well-drawn. But the star is Ronan who, at just 21, has already had a career full of varied characters from her star-making and Oscar nominated turn as a storyteller whose story spins out into directions she couldn't anticipate in Atonement, to the young murder victim in The Lovely Bones, to the assassin in Hanna, and the lonely vampire in Byzantium. She's matured into an actor who can suggest the deepest of emotions with the smallest of gestures and is able to express her character's interior life simply in the way she carries herself. It's a wonderful performance of the kind which is rarely recognized because of how quiet and understated it is, and because the nature of the character requires the actor to express the most ordinary of emotions and experiences, but here it just can't be ignored. Ronan shines and carries Brooklyn with uncommon skill and grace.
Posted by Norma Desmond at 8:00 AM

Now that I have finally seen Brooklyn, I completely agree with your review. It may be the best movie that I have seen in 2016, and I'm sure that it will make my top ten for this year.