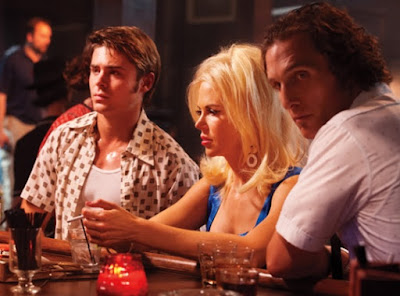 The Paperboy was one of the most critically reviled films of 2012, a film lambasted for everything except Nicole Kidman's performance, which received Screen Actors Guild and Golden Globe nominations and at the time seemed to be a real threat for an Oscar nomination. When it showed up in my recommendations from Netflix, I was more intrigued than anything, and after watching it I was greatly surprised because it's actually not terrible. It's lurid and trashy, but it's lurid and trashy by design not by accident, and there's something weirdly admirable about Lee Daniel's willingness to get right down there in the swamp with his characters, making the film as down and dirty as the people within it. Parts of it are pretty gross, parts of it feel undisciplined and self-indulgent, but if there's one thing The Paperboy isn't, it's boring.

The events of The Paperboy are told well after the fact, related by Anita Chester (Macy Gray) in an interview. Back in 1969, when the events in question took place, Anita was the long-time maid of the Jansen family - father W.W. (Scott Glenn), older son Ward (Matthew McConaughey), and younger son Jack (Zac Efron). Because Ward and Jack's mother left when the former was a teenager and the latter a toddler, and because W.W. has devoted most of his time to running the local newspaper and womanizing, Anita and Ward essentially raised Jack together and his relationship with both is affectionate, while his relationship with W.W. is distant and defined mostly by necessity. By 1969, Jack, a once promising athlete, has been expelled from college as a result of a prank and returned home and works for the paper as a delivery boy. Ward, meanwhile, has moved to Miami and works for the Miami Times and is brought back to his hometown to do an investigative report on the 1965 murder of the town's sheriff which resulted in the conviction of Hillary Van Wetter (John Cusack), who now sits on death row but may be innocent of the crime. Ward brings with him his Miami Times colleague Yardley Acheman (David Oyelowo), whom the locals don't quite know what to make of because he's black and British and, as one man comments in not at all complimentary fashion, awfully confident in himself.

In their efforts to get to the bottom of what happened that night in 1965 and prove Van Wetter's innocence, Ward and Yardley work with Charlotte (Nicole Kidman), the woman with whom Van Wetter has been corresponding (she may be the only woman he's writing, but her favorite hobby seems to be writing men in prison and forming relationships with them via letter). Jack immediately falls in lust with Charlotte and is so infatuated that even witnessing the... let's say graphic display of affection that she and Van Wetter manage to put on when they finally meet in person, despite being separated by several feet and despite him being in shackles, can't do much to diminish his desire for her. Once Van Wetter finally gives them some information they can use (which takes a while, because his only real interest is getting off with Charlotte), they begin gathering evidence that might exonerate him, but it takes them in a direction which causes Ward to start going off the rails and eventually leads to the circumstances that would result in the murders Anita is being interviewed about all those years later.

On the one hand, I can see why The Paperboy was panned when it came out in 2012 because the level of taste on display can be generously described as "garish" and otherwise described as "grotesque." Whether it's long, lingering shots of an alligator's intestines being pulled out, or the lengthy sex scenes between Charlotte and Van Wetten, which are more repellent than sensual, or the scene in which Charlotte helps Jack deal with being attacked by jellyfish, or one in which Charlotte and Jack discover Ward's sexual proclivities, there is a lot in the movie that might be considered objectionable. On the other hand, Daniels is able to capture such live-wire naturalism from the actors, and he's able to root the film so firmly in its setting that it seems as sweaty and grimy as the characters themselves are in the heat of the Florida swamps, that The Paperboy feels vibrant and alive in a way that not a lot of films are able to achieve and I'm surprised that it didn't find more champions.

Moreover, while The Paperboy presents itself as trashy pulp fiction, it actually has some deep thematic concerns (albeit ones that are bluntly expressed, per Daniels' habit). The murder that ostensibly gives the story its purpose doesn't really matter at all and the investigation four years later is all just a pretense to explore the issue of racism in the South in the 1960s. Over and over again throughout the film, the issue comes up, encroaching on what is supposed to be the actual story and drawing focus away from the four white characters at the narrative's center and towards the black characters at the margins (in particular the one who acts as storyteller and filters all these events through her own perspective). Whether it's the silent battle being waged between Anita and W.W.'s new girlfriend, and Ward and Jack's inability to stand up for Anita even as they dislike the girlfriend, the reactions that people keep having to Yardley, and most importantly the self-loathing that Ward is revealed to have and what is said to be its inspiration, and Jack's heat of the moment discovery that even though he loves Anita, somewhere within him is a racist capable to throwing out the n-word in an effort to put Yardley in his "place" and the guilt he struggles with afterwards because Anita was there to hear it, The Paperboy is constantly foregrounding the uneasy relationship between the black and white characters, and in particular the uneasy relationship that the white characters who consider themselves progressive have with the dormant racism that resides inside themselves. The Paperboy certainly isn't among the most potent films about racism, but it's doing a lot more than it has been given credit for and is ultimately more entertaining than not.
Posted by Norma Desmond at 11:33 AM