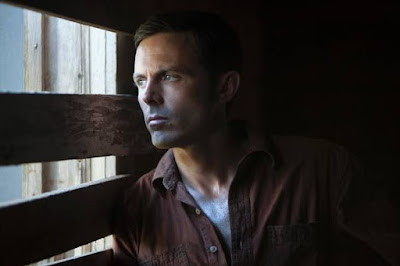 Writer/director David Lowery's Ain't Them Bodies Saints is like a Terrence Malick movie for people who wish that actual Terrence Malick movies dialed back his stylistic tendencies by about half. It's meditative and beautifully shot, but less elliptical and slightly more driven by plot. Parts of it are really, really good, but overall it feels poorly paced for its 97 minute running time, dragging in many places whereas Malick, at his best, unfolds his films in a way that sweeps the viewer into its current and then floats them along through to the end. This is all to say that while Ain't Them Bodies Saints is ultimately a fine film, it's a bit derivative and generally unexceptional.

Casey Affleck and Rooney Mara star as Bob and Ruth, a young couple expecting a baby and planning a score that will allow them to get out of their small town and start a new life for themselves. Things go wrong when Bob, Ruth, and their accomplice Freddy (Kentucker Audley) end up in a shoot out with the police and Freddy is killed, while Ruth accidentally hits Patrick Wheeler (Ben Foster), a young officer. Bob takes the fall for Ruth, telling her to tell the police that she wasn't a willing participant in the crime but was forced into it by him, leaving her free to raise their daughter until he can get out of prison and they can start their lives over together. In the time that follows, Ruth is taken under the wing of Freddy's father, Skerrit (Keith Carradine), and lives as normal a life as possible with her daughter, Sylvie, until Bob escapes from prison and the police, including Patrick, whose interest in Ruth is more than professional, put her back on their radar on the assumption that Bob will come back for her.

Bob is, indeed, coming back for Ruth, as well as for the money that he buried on the property where they were apprehended years earlier. He's assisted in his efforts to evade the police by his friend, Sweetie (Nate Parker), but there are also three bounty hunters who are after him, and both Skerrit and Patrick fear that Ruth and Sylvie will get caught in the cross fire when one of the groups searching for Bob finally catches up with him. Patrick tries to resolve the issue by encouraging Ruth to leave town until Bob is caught and everything blows over, while Skerrit is able to directly warn Bob that the bounty hunters are on his tail and tell him to stay away from Ruth. However, Bob is sure of himself and his ability to get around all the obstacles in the way between him and the woman he loves, though he might change his mind if he knew that that woman was beginning to waver and see the potential of a future with Patrick, who has been a constant presence since Bob's escape and can offer a more stable, far less dangerous future than anything Bob himself could offer.

Ain't Them Bodies Saints has the benefit of three great actors playing the members of its love triangle, but it suffers from the fact neither of Ruth's relationships with these two very different men is really developed enough to hang a narrative on. For all the talk throughout of the relationship between Ruth and Bob, the film isn't really able to give much of a sense of it beyond merely words, largely because Affleck and Mara ultimately spend very little time on screen together and because, while Bob is planning on seeing Ruth again, he takes his time getting there and the story is so slow moving that there's no real sense of urgency to that part of it. The other side of the triangle is a bit more explored, with Patrick sort of slowly circling Ruth (whom he doesn't know was responsible for him being shot) before finally landing, but the film is so languid in how it proceeds that there's no real sense of passion there, either. In terms of skilled actors, Ain't Them Bodies Saints has the pieces it needs in order to tell a compelling tale of three people whose paths cross for better and worse, but it's just so muted in terms of how it tells the story that the performances feel somewhat smothered.

As photographed by Bradford Young (whose credits include last year's A Most Violent Year and Selma), Ain't Them Bodies Saints is beautiful to look at from beginning to end, but that's part of the problem. It's all on the surface and so enamored with playing around with light and shadow that the film is never able to dig down and get very far beyond that. Despite that, it isn't ever a bad movie - there's just enough artistry on display in front of and behind the camera to give it some genuine value - but as an "art film" it's sort of middle of the road, solid enough to be "good" but not anything particularly special beyond suggesting the potential of its filmmaker in future projects.
Posted by Norma Desmond at 8:00 AM

"a bit derivative and generally unexceptional."

"so muted in terms of how it tells the story that the performances feel somewhat smothered."

" It's all on the surface and so enamored with playing around with light and shadow that the film is never able to dig down and get very far beyond that. Despite that, it isn't ever a bad movie - there's just enough artistry on display in front of and behind the camera to give it some genuine value - but as an "art film" it's sort of middle of the road"

All of these sum up my own feelings on the film. It works hard, but never quite gets to the level it's striving for.