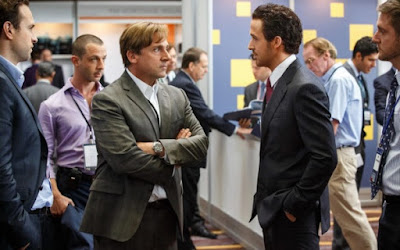 Writer/director Adam McKay is best known for his broad comedies, having now made several with Will Farrell (both Anchorman movies, Talladega Nights, Step Brothers, and The Other Guys), so on the surface he might not seem like the obvious choice to tell a story about the 2008 financial crisis which resulted in the collapse and subsequent bailout of the United States' major banks. However, if The Big Short wasn't a comedy, its story would be too damn depressing to watch. McKay, who adapted the screenplay with Charles Randolph from the book of the same title by Michael Lewis, takes a self-referential, aside-heavy approach to the story that, in its way, seeks to be educational in addition to entertaining and largely succeeds. It's just sort of a shame that the inescapable fact of the story is that, in the end, the joke isn't on any of the characters in the film (or the real people some of them are based on) but on all of us.

The Big Short is told through three narrative threads which unfold concurrently, sometimes coming close to intersecting but ultimately never directly touching each other. One thread centers on Michael Burry (Christian Bale), a socially awkward man who is a doctor by training but whose ability to digest and understand information has allowed him to become a successful hedge fund manager. When he begins taking a closer look at the subprime loans being packaged and sold to investors, he realizes that the market will be poised to collapse in 2007 as a result of bad loans outnumbering the good ones and forming the base of the housing market. Burry comes up with a plan to create a credit default swap market, investing by shorting the bad loans in order to profit once they're finally exposed for being as worthless as they truly are, which earns him the ire of the people investing in his hedge fund, who believe that he's crazy for betting against the housing market, which has never failed. However, since he knows that he's the only one who has actually taken the time to look at each individual mortgage he's shorted, he remains firm in his belief that what he's doing is the only smart thing to do - though his plan doesn't take into account just how deep the problems on Wall Street go and how complicit multiple agencies are in maintaining the illusion that these bad investments actually have some value.

The other major thread follows Mark Baum (Steve Carell), a trader who is known not just for calling bullshit when he sees it, but for trying to make sure that people are punished for their dishonesty, and who ends up in league with Jared Vennett (Ryan Gosling), an investor who has gotten wind of Burry's default swaps and decides to get in on the action himself. After Baum and his team head out to Florida to take a closer look at just how close the bubble is to bursting in the housing market, they go all in with Vennett, though Baum will become horrified once he realizes how big the collapse is really going to be and how enormous the scale of fraud that has pushed the economy right to the edge of the cliff. Slightly smaller in stature to the plots following Burry, Baum, and Vennett is that of Jamie Shipley (Finn Wittrock) and Charlie Geller (John Magaro), two small fish investors who get involved in default swaps after finding an investment proposal that Vennett has prepared. Because they don't have the experience or funds necessary to do it themselves, they seek the assistance of Ben Rickert (Brad Pitt), a former banker who now spends his time being paranoid that the government is listening in on his phone calls and extolling the necessity of growing your own food to ensure its quality, having left the banking industry after losing faith in it. Needless to say, his experience assisting Shipley and Geller doesn't do anything to change his opinion.

The film bounces nimbly between its three threads, ultimately anchored by the fourth wall breaking narration of Vennett, who acknowledges exposition for what it is by throwing it over to various celebrities to explain concepts and terminology used in discussing finance. The frisky, sardonic attitude that the film takes functions at once to keep the audience from feeling overloaded with what would otherwise be a lot of rather dry information about the mechanics of the finance industry, but it also works to effortlessly pull us into league with the main characters. In other circumstances these men might be dismissed as nothing more than jerks (Baum and Vennett), weirdos (Burry and Rickert), and wannabe Wall Street bros (Shipley and Geller), but in removing that fourth wall and allowing direct communication to the audience McKay creates a sense that the heroes and the viewers are in on it together, conspiratorially sharing a laugh at the expense of the villains who are about to be undone by their own stupidity. We expect these characters to be heroes because we're trained by movies to see stories like this as ones of the "little guy" taking on the "big guy" and winning a practical victory to complement the moral victory they've already claimed. But, as the film itself eventually acknowledges, that isn't really how it is at all.

The Big Short is a film and a story that is ultimately without heroes. While we might laugh along at the idea of the protagonists sticking it to the people who run the gamut from knowingly corrupt to blindly greedy, with plenty of stops in between, the protagonists really aren't better in any fundamental way. The people they're up against are getting rich in the now by doing something stupid, but all they're trying to do is get rich later by betting against that stupidity, and what they accomplish doesn't actually help or save the economy, it just allows them to get what everyone else is getting: big, fat cheques. They're rich men (even Shipley and Geller are, by most people's standards, rich, having turned $100k in seed money into a multi-million dollar business before they even get in on this venture) who will just be slightly less rich if things don't turn out their way. The people who will actually suffer are those saddled with loans they can't pay and never should have been allowed to take, those who will end up homeless either because they can't pay their mortgage or because they're renting from someone who can't pay their mortgage, and those who will lose their jobs because once the housing market crumbles, it's going to take a lot of other industries down with it. The film itself understands and makes a point of this, directly acknowledging that its characters are as single-minded and willing to capitalize on circumstances to make a buck as the supposed bad guys are. These guys might "win," but it's a pretty hollow victory in the grand scheme of things, particularly once you take into account that it changed nothing.

In addition to its strong and assured narrative voice, The Big Short boasts a pretty fantastic cast doing some pretty great work. Although Gosling acts as the film's narrator, delivering a relaxed and playful performance despite how jacked up his character often is, it's Carell who really holds the film's center as the story's self-appointed moral arbiter determined to ensure that no one gets away with anything and deeply at odds with his own role in the financial crisis. Gradually over the course of the last decade, Carell has shown himself to be an actor with far more layers than one might have suspected when he introduced the world to Brick Tamland, and he brings a lot to the role of Mark Baum, turning him into a man who is angry with the world because not so deep down he's really disappointed in himself. Carell and Bale, whose performance is able to transcend the character's inherent quirks in order to make him more than just a tangle of weird tics, have the most outwardly showy roles, which is perhaps why they're the only ones who've had their performances singled out for award nominations, but to my mind the film's most intriguing character is Rickert, with Pitt delivering an understated depiction of a man who, despite his eccentricities, often seems like the only adult in a room full of overgrown children. While everyone else is running wild around him, he is the staid, serious presence that reminds us that, yes, despite how insane all this seems, it actually did happen.
Posted by Norma Desmond at 9:31 PM