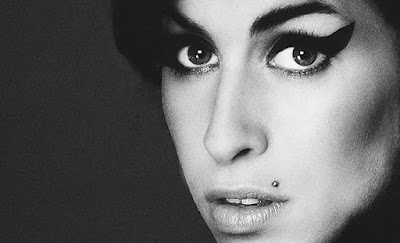 By the time of her death in 2011 at the age of 27, Amy Winehouse had long since transitioned to the phase of celebrity when a person ceases to seem like an actual human being and starts to become a pop culture caricature of celebrity excess. If nothing else, it is to director Asif Kapadia's credit that Amy immediately re-establishes its subject as a real person, one with talent and dreams and painful experiences, and then maintains that sense of genuine humanity even as it charts her very public descent from a star embraced for her undeniable gifts to a punchline and tabloid curiosity. Because we know how it ends, Amy is a somber viewing experience, sometimes difficult movie to watch, but it's also totally engrossing and often moving.

Amy is composed largely of private home video footage captured by those closest to the singer. Although several people in her life are interviewed for the film, Kapadia limits those interviews to voice overs which play over the assembled footage, eschewing the traditional talking head interview, which has the effect of keeping anyone from drawing focus away from the subject at hand. The film is always about Amy Winehouse, and Kapadia doesn't waste any time in showing why she was so special, opening the film with home video footage of a teenage Winehouse - almost unrecognizable from how she would look at the end of her life - and her friends hanging out. They begin singing and the level of natural talent that Winehouse possessed becomes immediately apparent. By 16, she would have herself a manager (himself only 19 and in the footage of them at the beginning of Winehouse's career they both seem like the kids they very much were), and things began to pick up fairly quickly from there. Though her style of music was different from everything else that was popular at the time, the power of her voice was transcendent and broke through the boundaries of genre. By 2003, when she was only 20, her debut album "Frank" would be released and she was poised to become the next big thing on the music scene.

Her meteoric rise would come as a result of the song "Rehab," in particular, and in general from its album "Back to Black," inspired by Winehouse's dysfunctional, tumultuous relationship with her eventual husband Blake Fielder-Civil. It's at this point in Amy that the intimate personal footage of Winehouse captured by friends begins to give way to the invasive tabloid footage with which the world would become so familiar during Winehouse's relatively short time in the public eye, as her greatest professional success unfolds at the same time that she spirals deeper into drug and alcohol abuse exacerbated by anorexia and a co-dependent relationship with Fielder-Civil in which they seemed to be racing each other to death's door. At the time of her greatest success, she seemed to be at her most unhappy, confessing to a friend the night she won 5 Grammys that it was all so boring in the absence of drugs; in many ways, the film leaves the impression that she was already long gone by the time she died. The ending of Amy comes as no surprise, but because as a viewer you're so emotionally spent from watching it unfold, from watching footage of Winehouse trying and failing and trying again to clean up so that she could carry on with her life and career, it still hits really hard.

Amy has been criticized by Winehouse's family for its depiction of them, which is fair insofar as the family doesn't exactly come off very well, but at the same time the people who were around Winehouse are damned by their own words (and sometimes actions) through the course of the film. Whether it's her mother stating that she hoped it was just a phase but otherwise did nothing when a teenage Winehouse told her that she had turned to bulimia as a diet strategy, or her father asserting that if Winehouse had a substance abuse problem it was on her and her alone to arrange for herself to go to rehab (at a time when she was drinking so much and doing so many hard drugs in such quantities and combination that a doctor expressed amazement that she hadn't sent herself into a coma), or her father bringing along a reality tv crew to film what was supposed to be a secluded getaway for Winehouse to recover from rehab, the family ends up looking less like a support system and more like the perfect storm for fostering her swift descent. It takes a lot to come off looking worse than Blake Fielder-Civil, who seems like a ghoulish parasite, but Mitch Winehouse manages it.

Yet, at the same time, the film never suggests that the family is alone in aggravating Winehouse's problems, pointing to the media and the culture in general for the ways that her addiction was treated as a dark form of entertainment. Winehouse isn't alone in experiencing that treatment - Charlie Sheen had a bizarre, often televised, breakdown in 2011, a few years prior to that Britney Spears struggled very publicly with mental health issues and the media's treatment formed the basis of South Park's 2008 episode "Britney's New Look," and Lindsay Lohan has stepped in and out of that particular spotlight over the years - and part of what the film does is highlight how ill-equipped we are as a society to discuss substance abuse and mental health issues when they occur in conjunction with celebrity. Somehow, once we've been entertained by someone as a result of their talent, we find it difficult to stop seeing them as being here for our entertainment even when they aren't performing and are struggling with personal problems. The final third of Amy makes one feel a little bit sick as it shows that the glare of tabloid celebrity only became stronger at the moment when what Winehouse really needed was to be left in privacy to sort herself out. This isn't to say the film makes the argument that the media is to blame for it as, after all, most of the people in music's "27 club" (which includes Jimi Hendrix, Janis Joplin, Jim Morrison, and Kurt Cobain, among others) died before the tabloid media became the all-consuming thing that it is now, and Winehouse certainly had a lot of different issues that contributed to her addictions and early death, but the film definitely underscores the idea that pop culture is a vampire culture - give a little, it tries to take everything, and all we're left with is the memory of a great talent and the attendant "what if"s.
Posted by Norma Desmond at 12:26 PM

It sounds like a great documentary. I'd just like to point out that you made a typo in the first paragraph....I think it should be "public" not pubic.

Thank you - that was unfortunate.