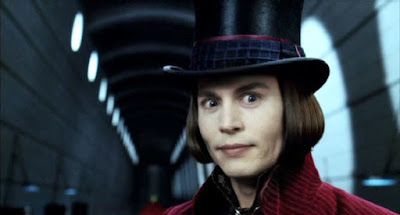 To all the people who will now find that song stuck in their head for an indeterminate amount of time, you are welcome. As of today, I have been living this nightmare, off and on, for ten years.


The Story
Residing in the shadow of Willy Wonka's chocolate factory, young Charlie Bucket (Freddie Highmore) and his family live a hand-to-mouth existence which finds them strapped for cash and crammed together in overly close quarters, but not unable to find happiness therein. When the eccentric chocolatier (Johnny Depp) announces a contest which will find five lucky children winning a tour of the factory and one them winning an undisclosed grand prize, Charlie finds the last available ticket and selects his Grandpa Joe to be his parental guardian for the tour. The other four contest winners are Augustus Gloop (Philip Wiegratz), Veruca Salt (Julia Winter), Violet Beauregarde (AnnaSophia Robb), and Mike Teavee (Jordan Fry), each of whom, in their own particular way, is a little monster, and each of whom finds themselves dispatched at some point during the tour, sent off with a personalized song by Wonka's Oompa-Loompas (Deep Roy). By the end of the day, only Charlie is left standing to receive the grand prize, but Wonka's terms may prove too high for him to accept.


The View From 2005
The Good: "There are those who will tell you, under the misty-eyed delusion of nostalgia, that Mel Stuart’s fun but heavily flawed Willy Wonka & The Chocolate Factory is an indisputable classic. But where the 1971 Gene Wilder vehicle left a feeling of emptiness after a brief saccharine high, Tim Burton’s vision of Roald Dahl’s fable of cavities and calamities has the same rich sweetness shot through with the acidic wit that’s kept kids turning the novel’s pages and ruining their appetites for 40 years." - Olly Richards, Empire

The Bad: "But such subtext is much less important to Burton than style... Still, the film's strenuous efforts at becoming a camp classic eventually begin to wear thin. "Why is everything here so utterly pointless?" a character wails at one point. As Burton shoves Charlie and the Chocolate Factory down yet one more digressive, if fantastic-looking, path, viewers may well find themselves asking that very question." - Anne Hornaday, Washington Post

The View From 2015
I should confess at the top that, though I'm quite familiar with the meme it has inspired, I've never seen the Gene Wilder-starring Willy Wonka & The Chocolate Factory, as I understand that love for that film colors perception of this one in some viewers. So, with that out of the way, I'll state that I really like Charlie and the Chocolate Factory. I liked it when I first saw it 10 years ago and I like it now, and it's one of those films where bits and pieces of it have stayed with me between viewings in a vivid way. I'm not arguing that the film is great or a masterpiece or anything; I just mean that it's really entertaining and very funny. Just thinking about Wonka's introduction at his factory, when the puppets singing the song catch fire and start melting before the eyes of the bewildered children and their guardians (not to mention the callback later when, during the tour, the group passes by the Puppet Hospital and Burn Center - "It's relatively new."), makes me laugh, it's so hilariously macabre.

Generally speaking, I think that Charlie and the Chocolate Factory hits just the right notes in terms of being funny while also being incredibly disturbing. I can't recall how I initially felt about Depp's demented performance as Wonka, who is styled and whom he plays in such a way that he brings to mind Michael Jackson (albeit one who disdains most children), but now it seems brilliantly bizarre, a choice that just skirts the line of being disastrous, particularly for the fact that at basically all times throughout the film it seems plausible that Wonka is about to be revealed to be a serial killer. There's a certain elasticity to Depp's performance, which at times is light and airy and extremely silly, and at other times edged with something very dark and very sinister. In hindsight it might be argued that Charlie and the Chocolate Factory represents the moment when Depp's career "jumped the shark," as prior to this film he was an actor who made a lot of interesting, and often daring, choices primarily in low key fare and afterwards his career descended into a parade of Pirates of the Caribbean sequels and characters whose conception seems to be based entirely around their sartorial choices in high profile films with bloated budgets; but I have a hard time considering Charlie and the Chocolate Factory as anything other than a creative win for Depp. Yes, Charlie is another in Depp's long line of cinematic weirdos but as with a character like, say, Edward Scissorhands, this is one in which he's giving an actual performance and is actually engaged with the material around him, rather than just playing dress up and using a big production as an excuse for self-indulgence.

Admittedly, your enjoyment of Charlie and the Chocolate Factory may depend, to some degree, on whether you can enjoy a film where a group of children behave like monsters and then get some fairly vicious comeuppance. There's an edge to the story, but that edge helps to balance it out and keep it from becoming sickly sweet. As played by Highmore, Charlie is as guileless as the other children are obnoxious, and his family and their determination to stick together and keep a positive outlook despite abject poverty is designed to give the audience a case of the warm fuzzies. The film ends on a note of family togetherness, of the importance of sticking together and familial love conquering all - given that Wonka spends most of the movie acting like a sociopath, an ending this soft probably shouldn't work, but Tim Burton finds a way to make the soft elements of the film work with the hard elements, the sweet with the macabre. It's quite the balancing act, but Burton and Depp pull it off and ten years after the fact their take on Roald Dahl's classic story remains a great entertainment.
Posted by Norma Desmond at 8:00 AM