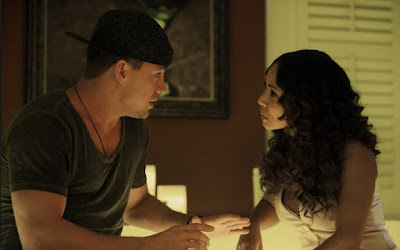 I didn't have particularly big expectations for Magic Mike XXL - I thought the original film was fine, better than I expected, but by no means great - but I still emerged a bit disappointed by it, not to mention suffering from cognitive dissonance given the number of articles that have been written about how "feminist" the film is. It's not a terrible film, and if all you're looking for in a movie is the display of well-sculpted abs (and one magnificent Twilight joke), then Magic Mike XXL may very well deliver for you. Personally, I thought that parts of it were great, campy fun and other parts of it were so boring that I found myself repeating the immortal, desperate cry of Milhouse van Houten, wondering when the story was going to get to the fireworks factory. The film takes the form of a road movie, and in that respect it takes a lot of diversions and they aren't always especially interesting. But, hey, abs, right?

XXL picks up three years after the events of the first film. Mike (Channing Tatum), having left the entertainment business behind, has followed through on his plans to start his own custom-made furniture business, which is successful insofar as it exists and he has clients, but which is not as successful as he needs it to be as he has only one employee, the business is mobile because he can't afford commercial space, and he's generally just scraping by to keep the business afloat. His relationship with Brooke has faltered and, as the film opens, he receives a call from his former co-worker, Tarzan (Kevin Nash), that his ex-employer, Dallas, has passed away. Expecting to attend a wake, he instead ends up at a party, where he learns that Dallas isn't dead so much as he has absconded overseas with Brooke's brother and Mike's former protege, and that what remains of Dallas' crew - Tarzan, Tito (Adam Rodriguez), Richie (Joe Manganiello), Ken (Matt Bomer), and Tobias (Gabriel Iglesias) - is getting ready to make the trek to a convention at Myrtle Beach to put on one last show before going their separate ways. Feeling like he's missing something from his life lately, Mike decides to shut down his business for a few days to join them and they hit the road in Tito's frozen yogurt van.

The road from Tampa to Myrtle Beach is fraught with adventure and diversions which threaten to keep the former Kings of Tampa from getting to the convention. They stop in at a gay bar and participate in a voguing competition; meet up with some girls, including Mike's pseudo-love interest Zoe (Amber Heard), at the beach; take some ecstasy and decide to completely overhaul their act and toss out the old routines and their costumes (which go flying out the window as they speed down the road), and then crash the van, leaving Tobias hospitalized; take a detour to visit Rome (Jada Pinkett Smith), a former friend of Mike's who now runs a private party house and who Mike believes could step in to take Dallas' place as the group's MC; and take another detour to the home of one of the girls from the beach, whose mother (Andie MacDowell) is hosting a small party with some of her friends and is delighted to have some male strippers show up, and where Mike meets up with Zoe for the second time and tries to convince her to come along to Myrtle Beach to see the convention. After that the crew finally makes it to the convention, where they put it all out there to give the show of their lives.

Magic Mike XXL is a curious film to me, not necessarily of its own accord but due to the reaction that it has garnered in other corners as plenty of writers have declared it a feminist film and a movie with women in mind. I'm not really sure I agree - or, at least, not entirely. On the one hand, one of the most striking things about the film is the variety of types of women it features - women of all shapes and sizes, of varying ages and ethnicity. That's great, and it speaks to how poorly Hollywood films in general incorporate different kinds of women, even as extras, that this stands out the way that it does here. On the other hand, the women in the film who have actual speaking parts all conform to Hollywood's usual standard of beauty. On the one hand, the film has its characters spend a lot of time talking about the importance of listening to women and the need for women to be able to take a stand for what they want. On the other hand, the finale finds Zoe repeatedly stating that she does not want to participate in the stage show and being dragged on stage against her will because it's what Mike wants and what he's decided is going to lift her out of the unhappy state that she's in. On the one hand, XXL is a film that openly invites women to ogle the male characters in a way that female characters have been presented for objectification since forever. On the other hand, the men at all times remain subjects, not objects, and remain dominant and in control during their dancing scenes, while the women in the audience are often reduced to literal props who get lifted up, swung around, and at some points bent over and used like a table for the sake of an elaborate routine. On the one hand, the film and its characters openly invite women to celebrate their sexuality. On the other hand, that sexuality, as envisioned by the film, is very strictly defined and includes, along with taking ecstatic delight in having some dude thrust his junk in your face and use whipped cream to simulate spraying ejaculate on you, a hint of compulsory bisexuality. While the men in the film are all robustly heterosexual, the women are more fluid, with Zoe telling Mike that she isn't interested in him because she isn't in a "boy phase" at the moment, and with the suggestion of a past relationship between Rome and Paris (Elizabeth Banks), one of the organizers of the convention. I'll give XXL the benefit of the doubt that it maybe thinks it's being feminist in the way that it portrays and engages with women, but it's going about it in the most narrow and male gazey way possible.

At any rate, all that aside, XXL isn't a film without some fun in it. Tatum is very relaxed in the role, as he ought to be since the role is based in part on himself, and while XXL is missing the very specific energy that Matthew McConaughey brought to the first film, Pinkett Smith does a fine job filling the void. She ultimately appears in only a small portion of the film, but whenever she appears on screen she brings a welcome infusion of vitality into it which is lacking in so many other parts of the narrative. I said at the top that parts of the movie are boring and the story has a lot of really draggy scenes and superfluous elements. I genuinely don't know what the purpose is, for example, of the Zoe character as she adds absolutely nothing to the story except, perhaps, about 10 useless minutes to the film's running time. She's the "love interest," except that she's not the love interest, and the film doesn't ever really do anything with her so the necessity of her presence in the story is questionable - but that's true of so many elements in the movie. If all you want from a movie is to watch Channing Tatum dance (and I'm not knocking that, as his first number in this film had me thinking that he's this generation's Gene Kelly and that someone ought to create a dance-heavy musical around him), XXL might leave you satisfied. Otherwise, I would suggest just watching the original Magic Mike instead.
Posted by Norma Desmond at 8:00 AM