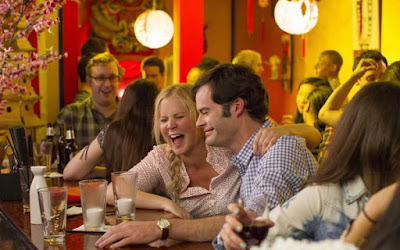 The marketing push behind Trainwreck, which has worked to align the film with star Amy Schumer's ever growing in popularity TV show Inside Amy Schumer, centers on the idea that this film is a sort of anti-romantic comedy, something that turns the genre on its head and is more in tune with Schumer's sharp and sometimes envelope pushing show than with other romantic comedy films. This isn't really true, but that's okay. In terms of storytelling, Trainwreck hits a lot of the familiar genre beats, it just mixes it up a little bit with some slightly more foul-mouthed and overtly (and unapologetically) sexual humor than you might find in the typical romantic comedy. Trainwreck isn't revolutionary, but it is very, very funny and really, that's all it needs to be.

Schumer stars as Amy Townsend, a writer for a men's magazine called S'nuff who fears commitment partially as a result of her parents' acrimonious divorce and her father's subsequent declaration that monogamy doesn't work. While that shared history hasn't scared her sister, Kim (Brie Larsen), off from marrying and starting a family, Amy keeps the men who come into her life at a distance, cutting most of them off after one night save for one guy (John Cena) that she dates casually and who makes the mistake of thinking that they're more serious than they actually are. Although Amy professes to hate sports, her boss (Tilda Swinton, fabulous as ever) assigns her to write a story about Aaron Conners (Bill Hader), a sports doctor who works with some of the most famous athletes on the planet. Despite Amy's disinterest in sports, and inability to be impressed by the fact that Aaron's best friend is LeBron James (not totally relaxed playing himself on screen, but funny nevertheless), she and Aaron hit it off and have what she believes will be another in her long line of one night stands. He, however, really likes her and wants to pursue a relationship with her, which confuses her and makes her nervous.

Entering into uncharted territory, Amy remains guarded with Aaron for a while but then warms up to him, allowing them to become, in her words, "the whitest couple ever." Things are going well for a while, but eventually Amy (with a little help from her father, who tells her that the end of the relationship is only a matter of time) begins waiting for the other shoe to drop and Aaron, though steadfast up until that point, begins to feel wary as well. While Amy's fears concern the future, and the pain that she foresees from the inevitability of the relationship eventually breaking down, Aaron's fears concern the past, specifically Amy's past, as a result of an off-hand comment made by her brother-in-law (Mike Birbiglia). The tensions between the couple eventually come to a head, but this being a romantic comedy, they'll only break up so that they can have the opportunity to get back together in the kind of grand fashion that can only happen in the movies.

Trainwreck, which was written by Schumer, knows what kind of movie it is and plays within those boundaries, not breaking them but certainly at times pushing against them. Although it has an ending which affirms the value of monogamy and commitment, it really isn't judgmental about the fact that Amy has a lot of casual sex, at least insofar as it doesn't convey the message that Amy is unworthy of love and/or respect simply because of the number of sexual partners she's had. While the story certainly plays out in such a way that it would be fair to read it as arguing that Amy's casual approach to sex stems from her being damaged by her father's history, and that somehow her relationship with Aaron "fixes" her, it also portrays Aaron's discomfort and insecurity over the number of sexual partners Amy has had as being his problem rather than hers and it is never suggested that she ought to apologize for her past. Trainwreck is nowhere near as subversive or as cutting or as confrontationally feminist as Schumer's tv series, but it is nevertheless a refreshing change of pace from the usual Hollywood romantic comedies, which tend to simply affirm and endorse the status quo and, in particularly egregious examples, are actually actively misogynist.

Also refreshing is the change this film marks from director Judd Apatow's recent output. While working from someone else's script doesn't completely break Apatow of his directorial bad habits - at over two hours long, Trainwreck definitely contains scenes that could have been trimmed or cut altogether, particularly one cameo-heavy scene which goes absolutely nowhere while going on forever - I found it to be the most purely enjoyable of Apatow's films since The 40 Year Old Virgin. Whether Schumer will be able to ascend to the heights that Steve Carell was able to reach after his breakthrough there remains to be seen, but she more than proves herself capable of carrying a film here. She has a fantastic screen presence and though she's aided by Hader (terrific as the leading man), and at various points by the supporting cast (particularly Swinton, who steals each and every scene she appears in), the film's success is ultimately her success. Trainwreck is a star-making film and it is definitely in contention to be the best comedy of the summer.
Posted by Norma Desmond at 8:00 AM