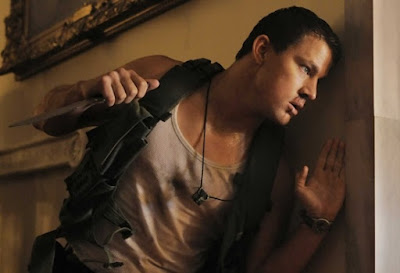 There probably isn't an easier or more overused logline in Hollywood than "It's like Die Hard but [fill in the blank]." Never mind that the Die Hard movies aren't even like Die Hard anymore, there's no easier way to describe a story about an ordinary guy who proves to be extraordinary capable when faced with a terrorist threat in an isolated location. Die Hard in the White House has such a ring to it that in 2013 Hollywood tried it twice, first with the Gerard Butler starring Olympus Has Fallen and then with the Channing Tatum starring White House Down. Yet, while smart money might have been on the Tatum version, seeing as Tatum was on a box office hot streak that saw him headlining 3 movies that broke $100 million in 2012, not to mention that White House Down tries so very, very hard to evoke Die Hard right down to the way Tatum is styled in the film's second half, White House Down fared so badly that it was name-checked by Sony as a key reason for its $197 million loss during the summer quarter. So where did it all go wrong? Where do we start?

Tatum stars as John Cale, a capitol police officer assigned to the security detail of the Speaker of the House (Richard Jenkins), who is struggling to bridge the gap that has grown between himself and his 13 year old daughter Emily (Joey King). As Emily has a passion for politics, John tries to bond with her by getting passes for them to take the White House tour, and he also manages to score an interview with the Secret Service for a job protecting the President, James Sawyer (Jamie Foxx). He doesn't get the job, but lets Emily think that he did, and they proceed on the tour not knowing that a bomb is about to go off at the Capitol building and a group of terrorists are about to take control of the White House with the assistance of the Head of the Secret Service Detail (under normal circumstances I would consider this a spoiler, but the character is played by James Woods and therefore obviously a bad guy from the moment he shows up). Just before things begin to go down, John and Emily end up separated and much of the drama in the film centers on whether and how John will rescue Emily from peril. The rest of the drama centers on the political aspect, with John stepping in to protect President Sawyer as they try to evade the terrorists in various locations in the White House, and the Presidential power begins shifting hands, as the Vice President is sworn in and then blown up aboard Air Force One, and then power passes to the Speaker of the House, who must decide whether or not to order an airstrike on the White House to take out the terrorists, sacrificing the hostages in the process.

White House Down wants very badly to be Die Hard, to the point where it seems to think that it actually is that 1988 Los Angeles-set movie masquerading as a 2013 Washington, DC-set movie. Like John McClane, John Cale is a decent guy but he's got family problems, and while McClane's problems are with his wife, and Cale's problems are with his daughter, the result is essentially the same as their respective efforts to repair those strained relationships leads to each of them ending up in a building that they would otherwise not be in at exactly the moment when it is seized by terrorists, leaving each of them in the position of being the only ones who can stop the plot. Midway through the film, John Cale ditches the outer layers of the upper half of his suit, leaving him sporting the classic, increasingly dirty tank top look rocked by McClane, and I'm sure it was tempting for director Roland Emmerich to come up with a way to leave John Cale shoeless, but that doesn't come to pass (Foxx's President Sawyer, does, however, lose a shoe, which White House Down makes a point of). The big differences between the films are, firstly, that while McClane's sort-of sidekick is the police officer with whom he communicates via walkie-talkie but doesn't share the same space, Cale's sidekick is the President, with whom he spends a lot of time onscreen; and, secondly, that Die Hard doesn't feel like it's a million hours long, the way that White House Down, which is so overstuffed in its finale that it rivals the final installment of The Lord of the Rings for the sheer number of endings, does. White House Down isn't done until it's revealed not just the inside man/mastermind of the terrorist plot, but the inside man/mastermind behind that mastermind, until the President receives not just one life threatening injury but a second one, until the Air Force One is destroyed with a missile, Ground Force One is shot up and sent flying into the White House pool, the White House is shot at and partially set ablaze (the number of overt and subtle references to the War of 1812 in this film would lead one to believe that this was a Canadian co-production, but it's not), and then seconds away from being obliterated in an air strike.

All of this might be easier to bear if the film were actually any good, but it's such a ridiculous mess that it's hard to forgive it for its flaws. It makes a few efforts at mixing comedy into the proceedings, all of which fail spectacularly because the film takes itself so seriously (it ends with the literal flag waving of an idealistic young girl stopping a military air strike, and then Iran, Israel and other nations declaring peace in the Middle East as a result of the US being able to seize victory out of their near-defeat on home soil), and because those comedic moments all come from the scenes between Tatum and Foxx, who have so little buddy chemistry on screen together that it becomes a negative commodity. Tatum and Foxx can both be incredibly engaging and charismatic actors, but put together in this film, playing these cardboard characters (the film seems to think that making Sawyer as superficially close to Barack Obama as possible is all the character work that the story needs), and it's like they cancel each other out whenever the share the screen. Meanwhile, the bad guys aren't especially impressive, but then again they don't need to be because everyone else in the film is so stupid. For example, for a brief period after the terrorists take the White House, Emily is sneaking around the building, taking video of the terrorists with her phone which she then uploads to the internet before being caught. The media then not only broadcasts the footage, but also Emily's name and photo on the assumption, I suppose, that the terrorists don't have access to a television or the internet, or that they wouldn't shoot a 13 year old in cold blood. Moreover, the terrorists are holding the White House and possess rockets which they put on the roof for their expected battle with the army, which is parked just outside the gates, waiting for the order to storm the building. And where are the media and curious civilians while this is happening? About 20 feet behind the tanks. Because that makes sense. They're all still there when the air force sends in its fighter planes for the air strike on the White House. Because that makes sense.

White House Down is dumb, but I doubt anyone would expect anything less from a film with this premise. It was going to be dumb no matter what, the question was only whether it was going to be awesome dumb or stupid dumb. Roland Emmerich has directed enough huge action movies to know what he's doing, but White House Down doesn't deliver any particularly memorable action pieces (the closest it comes is a throwaway line where a character references the aliens blowing up the White House in Emmerich's Independence Day), which makes it difficult for the film to attain "awesome" status. Even if it hadn't come out three months after Olympus Has Fallen, which I haven't seen but which looks just as dumb and self-serious as this one, White House Down would still seem derivative because it doesn't even attempt to do anything original. In the end, White House Down is just another generic action movie, as disposable as it is loud and flashy.

Should It Have Been a Blockbuster?: Logic dictates that it could have been - it's dumb, but lots of dumb movies become blockbusters, particularly when they have this kind of star power - but it certainly wouldn't have deserved it.
Posted by Norma Desmond at 8:00 AM

I enjoyed this one for what it was: big, dumb action. I liked it a good deal better than Olympus Has Fallen which is the one I thought took itself too seriously. I agree White House Down is not a particularly good film, but it was fun.