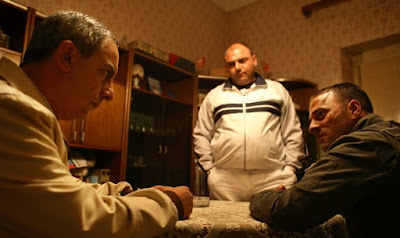 Movies about gangsters, even those which see the gangsters as villains rather than anti-heroes, almost inevitably end up glorifying the lifestyles of their protagonists, even when they make it clear that that life is destined to end in a hail of bullets. These films depict men attaining vast power, living lavishly (usually with a woman – or two – on his arm), and sometimes dying gloriously. As Henry Hill puts it in Goodfellas, “to be a gangster was to own the world,” and all the bad stuff that goes along with the life is worth it because the alternative is being an average nobody. Matteo Garrone’s Gomorra adopts a distinctly different perspective from most mob movies, in that his film is very much a movie about “average nobodies,” men who occupy the bottom rungs of a crime syndicate and struggle to achieve little more than survival as a vicious mob war cuts down men and women left, right, and center. It’s a brutal and unsentimental film, and a great one.

The narrative is divided among various characters, some of whom are deeply involved and others only superficially involved in organized crime, including Don Ciro (Gianfelice Imparato), a middleman who delivers money to the families of incarcerated members of the Camorra crime family; Pasquale (Salvarote Cantalupo), a tailor whose skill is essential to the success of a Camorra controlled firm but who finds himself tempted by an offer from a rival organization; Roberto (Carmina Paternoster), a young man being trained by Franco (Toni Sevillo), who makes his living illegally dumping waste; Toto (Salvatore Abruzzese), a teenage boy taking his first steps into the underworld; and Marco (Marco Macor) and Ciro (Ciro Petrone), two young men who play at being big league gangsters and get in way over their heads, making many enemies in the process. As the story unfolds, all of them will find themselves at a crossroads, forced to make choices which will determine whether they live to escape the mob life or whether they join the growing ranks of the dead.

There’s nothing glamorous about this world as Garrone depicts it. Much of the action takes place in the decaying tenement where many mob families live and which, as a result, is ground zero for the ever escalating battle between the two factions fighting for power and control. For kids like Toto, murder is a part of everyday life, something that happens a few doors down every day; the tenement is a war zone where people die for little or no reason, caught up in a cycle of violence and retribution where nothing seems to be gained except for the perpetuation of that cycle. Yet, while Gomorra views this world as unglamorous, many of the characters themselves approach the lifestyle from an aesthetic point of view. The film opens with mobsters in a tanning salon, getting gunned down while they’re vulnerable in a tanning bed, and the younger characters are all about image, more concerned with how they look while they’re doing what they’re doing than the meaning and consequences of their actions. Marco and Ciro are obsessed with Hollywood movies, particularly Scarface, and spend their time play acting as Tony Montana, getting themselves all puffed up and stepping on a lot of toes in the process. Their immaturity is in stark contrast to the seriousness of their actions, which includes finding and stealing a cache of mob weapons, using them to shoot up (and blow up) a boat, and later rob an arcade – and it makes their fate particularly difficult to watch. A lot of people die in Gomorra, and in ugly, horrific ways, but there’s something especially and profoundly disturbing about the way Marco and Ciro scream and cry when the actual grown up gangsters catch up with them to give them a “warning” to stop messing around. In this one scene it is clear that they’re just a couple of dumb kids, unable to separate reality from fiction, and in so far over their heads that they don’t even realize that there will be consequences to the things they’re doing, that it is all very much real.

Based on a book by Robert Saviano about the Camorra crime syndicate and the way it is connected to legitimate ventures around the world, Gomorra takes no pains to romanticize mafia life, nor does it set up its characters as men to be admired. They aren’t suave, sophisticated guys who look good while they deliver brutal punishments and death to their enemies; for the most part (Sevillo’s character is an exception) they’re kind of schlubby guys who wouldn’t stand out in a crowd and are depicted as anything but cool. They look ordinary and that’s part of what makes the film feel so intensely real. Gomorra is brutal not because it is full of blood and death, but because those deaths are entirely wasteful, the result of petty squabbling, half-baked power grabs, and sheer idiocy, and those who are left alive are not extraordinary but simply lucky… for now. Gomorra is a hard, uncompromising film that has no time for sentimentality as it lays out all the ways that the criminal organization has snaked through every aspect of society. There are few films in recent years that are more chilling.
Posted by Norma Desmond at 10:32 AM