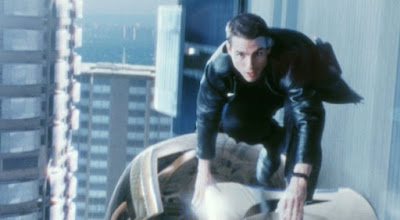 People don't seem to talk about Minority Report that much these days (though that may change when the TV series premieres this fall), which is odd because, aside from being a really good science fiction/action film, it's also a high point in star Tom Cruise's career since the 20th century gave way to the 21st (I'd say it's a high point in director Steven Spielberg's 21st century career, too, except that Lincoln, A.I. Artificial Intelligence, Catch Me If You Can and War Horse are among the 10 films he's directed since 2000, so Minority Report falls more in the middle of his output). I hadn't seen Minority Report in years before sitting down to watch it recently, and I was pleasantly surprised by how well it has held up, the soft ending aside. It's a film very much worth revisiting.

Set in the year 2054, and loosely based on a short story by Philip K. Dick, Minority Report imagines a world where murder can be eliminated through a branch of the police force called PreCrime, which utilizes a trio of special humans called "precogs" who have the ability to see the future, to stop crimes before they can happen. The current leader of the program is John Anderton (Tom Cruise), who was driven towards it by the disappearance of his son years earlier, an event which also resulted in breakdown of his marriage to Lara (Kathryn Morris) and a drug addiction. PreCrime is based in Washington, DC, and because of its success there it is poised to launch nation-wide and the Department of Justice, in the form of agent Danny Witwer (Colin Farrell), has come to check things out. While Danny is doing his investigation into the system, the precogs generate a prediction that John will murder a man named Leo Crow within 36 hours. John believes the prediction to be a mistake, as he doesn't know Leo Crow, and that Danny has framed him, so he goes on the run to try to find evidence to prove his innocence, pursued along the way by Danny as well as by the members of the PreCrime force, whose orders are to "Halo" him, which would put him into a coma and allow him to be imprisoned along with all the other people arrested for the murders they would have committed in the future.

John tracks down the co-creator of PreCrime, who informs him of the existence of "Minority Reports," which are created when one precog sees a future which differs in some detail from the future predicted by the other two. John is urged to find the vision created by Agatha (Samantha Morton), the strongest of the three precogs and therefore the one whose memory would contain the minority report on the Leo Crow murder, but to get to Agatha would involve getting back to the PreCrime facility and getting past all of the retina scanners in the city. To get past the scanners, John employs the assistance of a blackmarket surgeon (Peter Stormare), who gives him a new set of eyes, and then he manages to get into the facility and kidnaps Agatha, who struggles to tell him that there's something he's not seeing. So obsessed is John with proving that he won't murder Leo Crow, and finding out the truth about his son, that he doesn't recognize the actual crime at the center of this conspiracy, one to which Agatha has a very personal connection, and which could result in the complete dissolution of the PreCrime program.

Adapted by Scott Frank and Jon Cohen, Minority Report does an effective job at balancing its science fiction, mystery, and action elements and seeming like it's always moving forward, even as it is actually pausing for the sake of exposition or taking a small digression in order to build its world just a little bit more; and though the film clocks in at 145 minutes, for the most part Spielberg keeps things pretty tight and maintains the sense of urgency in the story. The ending of the film doesn't entirely work, in part because its optimism is at odds with the darker tones of the rest of the film, and in part because it misses the opportunity to underscore one of the film's key questions. The technology for PreCrime allows the government to stop crime before it starts, but it also, by its very nature, means that people are going to be arrested before they've actually committed a crime (though the film cheats this slightly by having the only actual PreCrime prevented murder in the film occur as the attempted murder is happening). Other technology in the film - the retina scanners, the robot "spiders" which are used at one point to invade a tenement where John is hiding to forcibly scan the eyes of all the residents - is designed to be part of a system which keeps people safe even as it is incredibly invasive (and, in the case of the pubic retina scanners, is not just for government use but has been sold for commercial use as well, allowing advertisers to market directly to each individual who passes by an ad). The question then is what do we truly value as a society? Do we want safety at any cost, even if it means that we are under constant surveillance and sacrifice things like due process (when someone is arrested by PreCrime, they don't go to trial, they are immediately rendered comatose by being haloed and then moved into a storage facility with the other would-be criminals)? And are we willing to sacrifice the good of each individual for the good of society overall? The release of the precogs at the end means that they are no longer slaves to the technology and are allowed to live their own lives, but it also means that people will start getting murdered again. The film has the opportunity to address this at the end, but it chooses not to in order to have a happy ending, and the void left by the unanswered question (what's better: that the precogs be allowed to live as everyone else, or that the lives of innocent people who would otherwise be murdered get saved?) is inescapable.

While the ending sidesteps that particular issue, the film does engage with important concepts and ideas about freedom, technology, and the relationship between authority and the individual throughout the narrative, and a lot of that work is done through the relationship between John and Agatha. John is driven to PreCrime in the first place because of the unsolved abduction of his son from a public pool, and he becomes convinced that what he is experiencing in the present day is tied to that event. In an effort to solve the mystery and save himself, he abducts Agatha from the pool where the precogs are held, and she continuously urges him to look, really look, at the vision she is creating. She's not seeing visions of his family tragedy, she's seeing visions of her own, which helped create PreCrime to begin with. Instead John charges forward, while Agatha begs him to consider that if he knows the future, he can make the choice to change it. That's key to the film, as this fact is true of all the murders that the precogs see. The technology, if it's to be used at all, could be used to give people the choice to change their futures, but instead is used to turn society into a police state where one could be arrested for what is essentially only a "thought crime" as it hasn't actually happened yet (though, again, the one precrime the film actually shows us is of a murder seconds away from happening). Minority Report is a film with lots of solid action set pieces, but it is also at its core a film rooted in intellectual ideas and which wants to engage its audience in a dialogue about how much we're willing to give up in order to feel "safe." Given that some of the technology imagined by the film has actually come to pass in the real world, Minority Report is a film that has only come to seem more relevant as the years have gone on, its questions very much questions that we should be asking ourselves now.
Posted by Norma Desmond at 10:36 AM

First...I had no idea this was being made into a TV series. I'd actually be on board to check that out!

Second, I'm with you on this being a movie people should talk about more. It's Spielberg right in his wheelhouse and he does this movie/concept/genre so much justice. Great review.