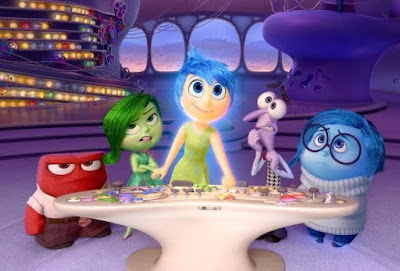 For a film about the psyche of an 11 year old girl, Pixar's Inside Out tells an awfully mature story. Not content to be merely a farce about personified emotions run amok inside someone's head, Pete Doctor's film has greater ambitions than that. Inside Out tells a story about the sometimes painful process of growing up, about the things that have to be left behind in order to make way for the things to come, and the ways that you have to change the person you were for the sake of the person you're going to become. As a result it's a film that is sad as often as it is funny, and one which is profoundly thoughtful and moving. Pixar has no shortage of great movies to its credit, and Inside Out is surely one of its very best.

The little girl in Inside Out is Riley (Katilyn Dias), whose moods are dictated by the dynamic at any given moment between the five basic emotions in her head: Joy (Amy Poehler), Sadness (Phyllis Smith), Anger (Lewis Black), Disgust (Mindy Kaling), and Fear (Bill Hader). For the entirety of her life, Joy has reigned supreme inside her head, occasionally giving way to the other emotions, but ultimately maintaining her dominance on a day in/day out basis. When Riley turns 11, however, her heretofore happy life is disrupted when her parents (Diane Lane and Kyle MacLachlan) announce that they're moving from Minnesota to San Francisco. While Joy tries to maintain control of Riley's mood and mindset, things become difficult when Sadness begins changing Riley's memories, turning them from happy to sad. When several of Riley's core memories are dislodged, Joy struggles to collect them and get them back into place, and in the process both she and Sadness are sucked into a tube which takes them away from headquarters and drops them in the storage area where Riley's long-term memories are held, leaving them trying to figure out the best and quickest way back to headquarters.

In their absence, Anger, Fear, and Disgust try to figure out what to do and in the process cause Riley to become distanced from her parents and to feel helpless about her situation. As things get worse for Riley, resulting in the islands of her personality, which Joy and Sadness were planning to use as a means of getting back to headquarters, to collapse and disappear, the panicking trio come up with a plan for Riley to run away on the theory that since all the good core memories were created in Minnesota, the only way for Riley to be happy again is to go back there to create new memories. Meanwhile, Joy and Sadness take the long way back to headquarters, meeting up with Riley's forgotten imaginary friend Bing Bong (Richard Kind), who leads them through Imagination Land so that they can hitch a ride on the Train of Thought, which goes by headquarters in its travels. Along the way, however, Joy decides that she can't help Riley without abandoning Sadness, leading her to discover the value of Sadness just as Riley begins to come to terms with the change in her circumstances and the changes in herself.

Like pretty much all of Pixar's movies (possible exceptions: Cars, Cars 2), Inside Out is a film that speaks to a younger crowd on their level even as it digs deep to resonate with a grown up audience as well. While Joy is the narrative's central character (even more so, I would argue, than Riley herself), and certainly the most "kid friendly" of the characters, the film isn't telling a simple story about how joy and happiness can triumph over adversity. Instead it's telling a story about how less pleasant emotions like sadness not only have their place in a person's life and psyche, but how the experience of such emotions can actually enrich a person's life. At first Joy thinks that Sadness is ruining Riley's memories, and has long attempted to marginalize and control Sadness' place and power in headquarters, but what she comes to realize as the story unfolds is that Sadness provides Riley with something essential to her growth as a person. For the 11 years that Joy reigned supreme, Riley's emotions and her life were simple and straightforward. After 11, Riley's life becomes more complex as she deals with moving to a new city, having to make new friends, and learning that the void she's left in the lives of old friends will be filled by someone else; and her emotions become more complex as well, no longer defined by one feeling or another, but by the combination of feelings. Where once Riley's memories were simply "happy" or "angry," etc., they become memories that contain a multitude of emotions, combining things like "happiness" and "sadness" into the new "bittersweet." As Riley grows older and her life changes and takes on new dimensions and complications, her capacity for emotion has to change along with her.

The narrative in Inside Out is focused primarily on the recognition of sadness as a beneficial emotion, and of the fact that joy/happiness is maybe not even meant to be the dominant emotion as one grows older (that, alone, feels like a revolutionary statement for a children's movie), but the film also uses its premise to touch on the ways that girls, in particular, are socialized to caretake and put those around them at ease through the outward performance of happiness. Riley is understandably having a difficult time with her family's move and the abrupt transition from her old life to her new one, but rather than being encouraged to feel whatever she's feeling, she's praised for putting on a happy face and making things easier for her parents, who have various adult problems and stresses to contend with. Without it being said in so many words, Riley is encouraged to push down the difficult emotions for the sake of the comfort of those around her, something which society tacitly expects of girls and women on a daily basis and which can be harmful to the sense of agency and self-worth that a girl or woman feels. Though this element only accounts for a small part of Inside Out's story, the film rightly frames this as a bad thing and that helps to make it one of Pixar's most sophisticated, engaging, and profound films to date. Inside Out is a fantastic movie, for sure one of Pixar's best ever and likely to be among the best films of the year. The story is well-conceived and rich in its execution, the characters and voice cast are excellent (particularly Smith as Sadness), and the animation is beautiful. The only complaint I have about the film is that it's attached to the short Lava, which accounted for 7 of the longest minutes of my life to date.
Posted by Norma Desmond at 8:00 AM