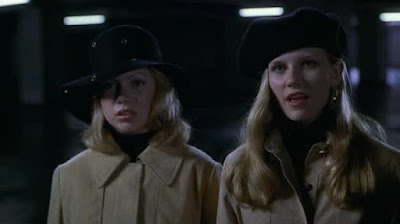 Sometimes you can only scratch your head and wonder at box office results. Of all the summer bombs I've looked at for this series, Dick is one of the lowest grossing despite being a really good and really entertaining film. In a fair world, Dick would have been one of the highlights of the 1999 summer movie season, but instead it ended up with a box office gross a few hundred thousand dollars shy of even Gigli's take, a movie that was notorious for being awful even before it hit screens. Dick was one of the best comedies of 1999 and, seen today, it's still pretty damn funny, even though it's a bit odd now to see Michelle Williams in such a purely comedic role. Audiences in 1999 didn't know what they were missing.

Dick stars Williams and Kirsten Dunst as Arlene and Betsy, respectively, two 15 year old girls who are busily composing a letter to Bobby Sherman in Arlene's room on an upper floor of the Watergate building on the night of the break-in of the DNC headquarters. During their evening, Arlene and Betsy accidentally come across G. Gordon Liddy (Harry Shearer), but have no idea who he is, which would be the end of things were it not for the fact that the following morning the girls go on a school trip to the White House, where they see him again and end up picking up a piece of paper that had been stuck to his shoe and which contains a list of Watergate conspirators. Although they don't remember how they know Liddy, he remembers how he knows them, and the White House Chief of Staff, H.R. Haldeman (Dave Foley) takes them aside to interrogate them and they end up meeting Richard Nixon (Dan Hedaya), who decides to try to contain them by keeping them close. To that end he offers them a job as "official" White House dog walkers and youth advisers, but once they start to get a look behind the curtain of power, they decide that Nixon isn't such a great guy after all (not because of the political stuff; because he's mean to Checkers) and determine to reveal what they know (even though they don't really quite understand what it is that they know) to Bob Woodward and Carl Bernstein (Will Farrell and Bruce McCulloch, a damn fine combination). The rest is history.

As satires go, Dick, which was written by Sheryl Longin and director Andrew Flemming, is sharp and highly engaging, even if you know only the basics of the actual events regarding the Watergate scandal. While a lot of the film's humor exists very much on the surface as sheer, obvious absurdity (which is only natural, given that the ranks of the supporting cast are filled out with alumni from Saturday Night Live and The Kids in the Hall), some of it is a little more subtle and under the radar. The Watergate scandal is often cited as the instance (or one of them) when American collectively "lost its innocence" and yet, as figured by the film, the story comes to light as a result of two teenage girls who are the epitome of innocence and never really lose it. Although they understand, in a vague and very general way, the importance of events going on around them, because they're teenagers, a lot of that stuff just sort of washes over them and never develops an air of reality as it relates to them. That's why Betsy can be flip about her brother being drafted to Vietnam (opening the way for her to take his bedroom), the girls can overhear Nixon admitting to all sorts of foul political dealings but fixate solely on how he yells at the dog, and how they can contact Woodward and Bernstein thinking that they're prank calling them when they're actually telling them things of great importance. Their concerns always remain at an adolescent level, their feelings always simple, their relation to, and understanding of, the grander world around them remote. That they remain guileless even after their experiences with Nixon (which includes Arlene developing a crush on the President that finds her replacing her Bobby Sherman shrine with one to Nixon, writing "Mrs. Arlene Nixon" in her notebook, and fantasizing about frolicking on the beach with him) is evident in the film's closing moments when Nixon's helicopter flies over the Watergate and sees the banner that Arlene and Betsy have prepared for him, which reads, "You suck, Dick, love Deep Throat" and the girls are delighted not by the fact that in just six words they've managed to set a new standard for double entendre, but for the much more mild thrill of telling an adult that he "sucks."

Dick would not work without the straight-faced performances from Dunst and Williams, but the broader performances by the supporting cast are key as well. In many ways, this film makes an excellent companion piece to the classic All the President's Men, depicting Woodward and Bernstein not as two brave reporters fighting and putting it all on the line to ensure that the public knows the truth, but as two somewhat buffoonish guys who spend much of their time battling against each other for control of the story and whose refusal to reveal the identity of Deep Throat is not a result of journalistic integrity, but a result of the fact that they know they would be ridiculed if the world knew that their big story came from two teenage girls who allowed their major piece of evidence (the list of names) to literally get eaten by one of their dogs. Farrell, who at that point in time was not quite "Will Farrell" and so is toned down considerably from the level he plays at in many of his films, and McCulloch play off of each other brilliantly, doing a give-and-take which finds neither one being the dominant one in the pairing. If Dick had been financially successful, I would like to think that Farrell and McCulloch might have had an opportunity to meet again on screen but, alas, it wasn't to be (except, possibly, in some wonderful alternate universe which also found Foley becoming a much sought-after leading man in comedies - if you haven't seen the Foley-starring The Wrong Man, go seek it out now).

But the best performance in the film belongs to Hedaya. At the risk of engaging in hyperbole, Hedaya's performance as Richard Nixon is the single greatest depiction by an actor of a real life figure ever committed to film. It's all there: the self-loathing and feeling of inadequacy, the paranoia, the desperation for approval which expresses itself as a seething resentment for its absence, the lust for power and the blithe way that he abuses it, his inability to relate to others. The film's vision of the 37th President is one rooted in farce from the first instant, when he's introduced berating a member of his staff for the fact that he's stuck with a dog that doesn't like him while Kennedy and Johnson's dogs loved them, but Hedaya's performance works because it taps into something that, while it slightly tweaks the Nixon image, still hits on something authentic. That's really the brilliance of Dick as a film, too. It's silly and it takes the actual facts and events and ratchets them up to the most ridiculous level possible, but it still manages to remain rooted in the real, to take the actual characters and events of Watergate and shift just to the left in order to bring them to life on film. Dick is surely one of the most underappreciated films of the last 25 years, and is ripe for "rediscovery."


Should It Have Been a Blockbuster?: Yes. This movie should have made all of the money.
Posted by Norma Desmond at 8:00 AM